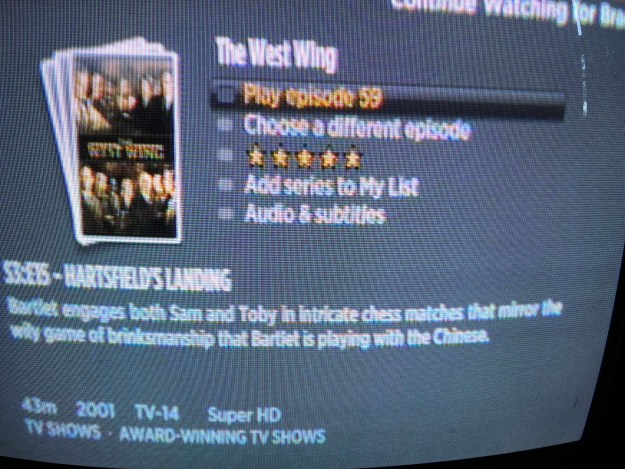 As you can see, the TV in my home office is an old SD model. But the resolution is usually better than THIS. Weird…

Lately, what with the weather, I’ve been doing more of my steps on the elliptical in my home office — indoors, with the A/C. And that means watching the Roku more.

So, of course, I’ve been rewatching “The West Wing” yet again. And of course, suffering the pangs of watching a show about a White House full of competent, decent, intelligent people who care deeply about serving their country — while I live (for the moment) in Trump World.

Anyway, the synopsis of this episode really jumped out at me. Boy, would that need rewriting to be current and relevant.

In case you can’t read it on that low-res screen, it says, “Bartlett engages both Sam and Toby in intricate chess matches that mirror the wily game of brinksmanship that Bartlett is playing with the Chinese.”

Today, we’d have to say something more like, “Trump plays tic-tac-toe with Jared, who lets Trump win to boost his confidence before he goes to the Chinese to beg them to help him get re-elected.”

Or maybe you can think of better words.

Oh, and before someone says “Aw, ‘The West Wing’ is fiction,” I’ll say that it’s fiction based on the reality that we knew, no matter which party held the White House, for all of our lives before 2016. I was reminded of that when I (re)watched a subsequent special episode in which presidents and their aides — from both parties — shared the kinds of observations about working in the West Wing in reality that the show worked so diligently, and brilliantly, to mirror…