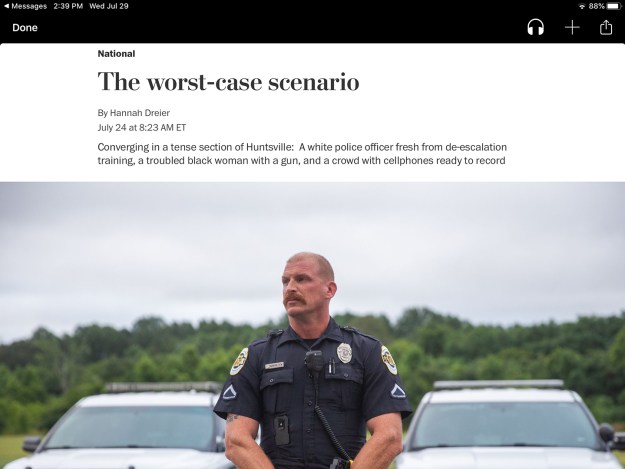 I’ve almost cleared out all that email. I have five items left in my In box, and three of them were notes I sent myself to remind me to write about something. I’m going to go ahead and share two of them now…

In the last week or so, I’ve run across a couple of really interesting pieces about cops in America today.

Both are well-researched, and full of nuances. And you know I like me some nuances. It’s one reason I’m never terribly enthusiastic about protests in the street, even when I agree with the cause — to the extent that the “cause” can be boiled down to a yes-or-no question, which they almost never can, which is why you don’t see me march in the street, generally speaking. Whether you’re a protester or a counter-protester, it’s just not a medium for communicating nuances.

Anyway, the first piece was in The Washington Post last weekend. The headline says “The worst-case scenario,” which is kind of an exaggeration, like a sign at a protest or counter-protest, but the story goes far beyond that. But anyone must admit the scenario is not good, as the subhed elaborates: “Converging in a tense section of Huntsville: A white police officer fresh from de-escalation training, a troubled black woman with a gun, and a crowd with cellphones ready to record.”

Actually, if I remember correctly, a lot of people were recording; it’s just nothing went viral because the thing ended calmly, more or less. I’m not saying it ended great, because the factors contributing to the situation were pretty horrific, but thank God nobody got killed.

I’m debating with myself whether to try to describe the story that was told here in 4,500 words. I think I’ll let you read it if you’re interested, and then we can talk about it. Like a book club. I think it would be a better conversation if everybody knew what happened, and what was going on in everybody’s life. So that everyone can get over any tendency to think in either Donald Trump terms or “defund the police” terms. Because neither of those ways of looking at things come remotely close to describing these people’s lives, and the tragedies that led to this mess.

Anyway, the other story is from The New Yorker, headlined “How Police Unions Fight Reform.” The subhed is “Activists insist that police departments must change. For half a century, New York City’s P.B.A. has successfully resisted such demands.”

This should be the hypothetical place where Black Lives Matter people ought to be able to agree with law-and-order folk: Police unions get in the way of holding police forces accountable — at least in some parts of the country, especially in New York.

But of course the left and right have their own established positions on this. And in the interests of full disclosure, I’ll remind y’all that I don’t even believe public-employee unions should exist — there should not be power structures interfering with public servants’ accountability to the people.

But this piece (about 7,400 words) is another one that reminds us that reality resists fitting neatly into any of our own pat explanations for the world. For instance… police unions, historically, haven’t fit into the same framework as the rest of the American labor movement — for a number of reasons, a big one being that cops have so often been the people who cracked the skulls of union organizers back in the day.

Which means that police unions are… culturally different. They have more of an insular nature, more of an attitude of “Nobody cares but our brothers in blue.”

Anyway, whatever you conclude from it, it’s an interesting piece. I recommend it, and the other one. And if anyone reads them both, I’d be interested in what you think… 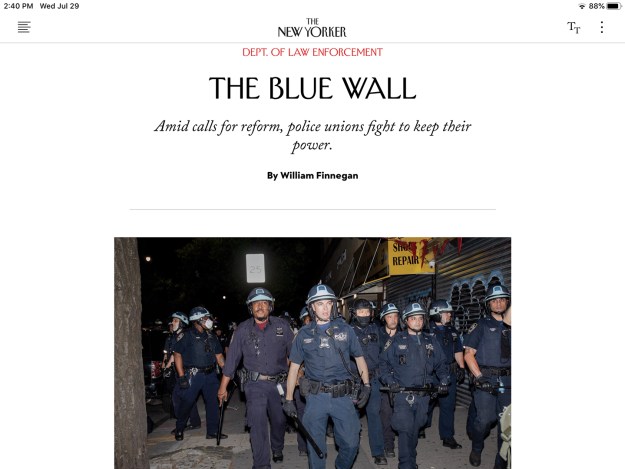 Yeah, this headline and subhed are different from the ones I quoted above. That’s because this image is from my iPad app. If you click on the link above, you get the other versions…

7 thoughts on “A couple of interesting pieces about cops”