Instead I’ve been streaming bits of it, as I have felt like it, today.

I like what I’ve seen, but I don’t really have any general observations to offer about the whole thing. But apparently The Nation does, based on this email I got: 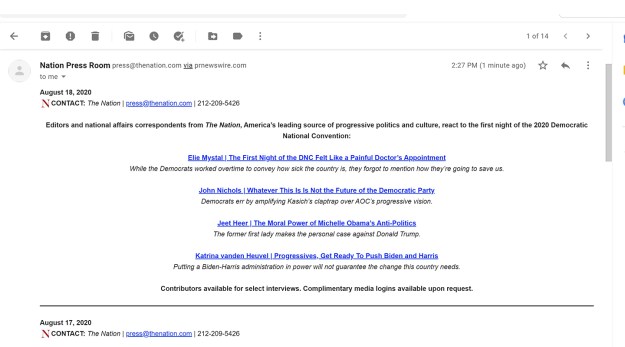 Looks like the first night made The Nation kinda surly. Check out such nonsense as “Democrats err by amplifying Kasich’s claptrap over AOC’s progressive vision.” Wow. I thought Kasich’s clip was great. It was essentially, “Here’s why everybody should vote for Joe — especially those in the overwhelming majority of the country that doesn’t drink AOC Kool-Aid for breakfast.”

This is good news. It underlines that the convention is appealing less to the “woke” crowd, and more to the rest of us — the aforementioned overwhelming majority.

This is excellent. I like this. This is exactly what we need to end the Trump nightmare…

11 thoughts on “Aw, is The Nation getting all surly? Things must be going well.”