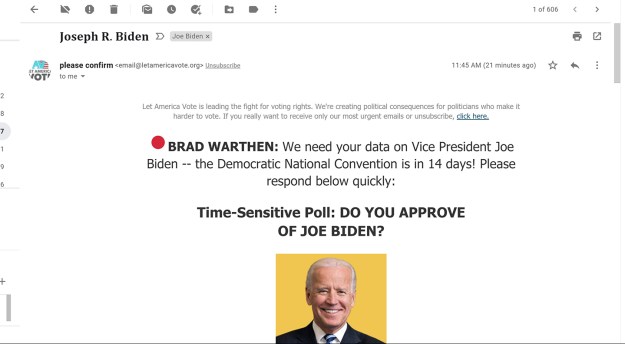 All year, various Democrats — I think I’ve told you how many lists I got on as a result of working on James and Mandy’s campaign in 2018 — have sent me “polls” that are, as you’d expect, intended to involve me in a task that ends with giving money.

But I occasionally pause in my mass extermination of emails and fill one out — mainly to see what sort of questions are being asked. I then I click away when I get to the donation part.

Today, I stopped on a particularly superfluous one that asked for “confirmation” on the question, “DO YOU APPROVE OF JOE BIDEN?” But I decided to click on it because it mentioned that the Democratic National Convention, such as it is this year, is two weeks off. So I thought it might ask me about the Veep decision.

And the last few days, I’ve been grabbing any choice that presents itself to share the idea that Joe needs to pick Karen Bass — and that he needs to, without any doubt:

Because all three of those are highly problematic. I’ve been particularly alarmed by the frequent mentions of Susan Rice — my least-favorite member of the Obama team — in recent days.

And it’s not that Karen Bass is the only possible person to choose. But she’d be excellent– something I’ve become even more persuaded of as I see the rather silly efforts to bring her down (not being on board with anti-Castroism when she was in high school? having said polite things to Scientologists in 2010? really? are those the best you’ve got?) — and I want her to get mentioned a lot as a way of countering the never-ending wave of buzz over the three really bad choices.

There are others out there — for instance, I was impressed by this piece headlined “The Case for Competence” that praised both Rep. Bass and Gina Raimondo. But Rep. Bass keeps making the short lists, and Gov. Raimondo does not, so I’m pushing the one with a chance.

It’s been encouraging to see her mentioned so frequently in recent days, even as I’ve cringed to see one or more of the The Problematic Three mentioned as well. I don’t want to jinx this, but… it sort of reminds me of the way voters finally coalesced around Biden himself after all those months of nonsensical pushing of other candidates (such as Harris, and Warren, and of course Bernie). I’m seeing something happen I’ve been waiting and hoping for.

I’ve got this feeling that Rep. Bass is the one Joe himself would pick if he just went with his own judgment. So any tiny thing I can do to increase buzz for her, I’m trying to do. Maybe it will make somebody else mention her positively, too. And then someone else. And maybe somewhere on that chain of reactions, Joe himself will see it and be encouraged, see that he’s not alone on this. If it can just slip through, amid all the nonsense pushing Harris, Warren and Rice.

It’s a long shot, but this year — especially after seeing Joe shut down the competition once South Carolina had its say — I’m being optimistic. Why can’t we have two candidates who inspire confidence? Why not?

Anyway, so I clicked on the “poll,” and started answering the questions. But I almost quit and walked away when I saw the second one, “Do you think Joe Biden cares about people like you?”

And who cares? What does this similarity to me have to do with anything? What kind of a jerk would I be if I only liked candidates who I thought would be good for “people like me?” Would that mean I was by implication saying, “The hell with everybody else?” And isn’t that the essence of being a Trump voter?

But I calmed myself down, knowing that Joe himself did not write this (and that I firmly believe that Joe cares about people like everybody), and that this offensive nonsense question is standard fare in these kinds of things, and there’s nothing I can do about it.

Besides, maybe I’m looking at it wrong. Maybe “people like you” just means people who are like me in good ways, ways that matter. You know, people who have backed Joe from the start, because he is the kind of person who cares about everybody. People who see that he needs to pick somebody who’s a good fit, like Karen Bass.

People who want what’s best for Joe, and best for the whole country. Thoughtful, concerned people

I almost quit when I got to the second question,