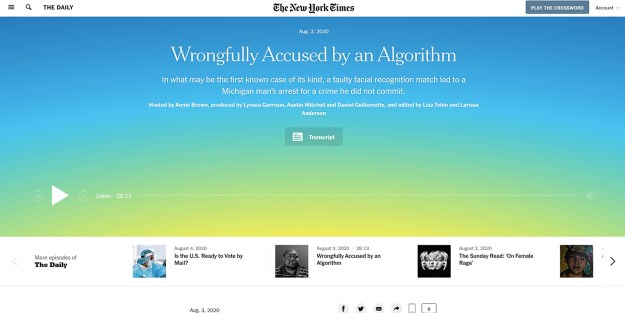 So I listened to The Daily yesterday, which I nearly always enjoy, but it seemed a bit… off to me. But interesting.

It was a detailed telling of the story about the innocent man in the Detroit area who got arrested because facial recognition software misidentified him as having been the guy who had stolen some watches from a store.

I’ve heard about this guy several times over the last few months, and each time the story has been brought up, it has been in the context of demonstrating that the use of facial recognition by the cops is highly problematic — and unfair to minorities, since the algorithms used in this country are way better at recognizing white men.

But is that really the case? After having listened to the story, I’m thinking the problem here is not that it’s bad or unfair technology, but that the cops used it improperly. I mean, they really screwed up here. But that would seem to call for better procedure, not abandoning the tool.

No doubt about it, what happened to Robert Williams was a nightmare. And inexcusable.

Cops came out of nowhere to arrest this guy on the basis of nothing but an erroneous digital identification. The software was SO bad that when they had him in interrogation and showed him the photo that was supposedly him, he held it to his face and “What you think, all black men look alike?” And the cops, to their credit, saw that it wasn’t him, and let him go.

It was gross. It was all kinds of cringe-worthy, and this man will carry around the humiliation of the experience for life. And it all happened because they had zeroed in on this man based on nothing but the facial recognition that was based on

But here’s the thing. The podcast started out by saying “In what may be the first known case of its kind, a faulty facial recognition match led to a Michigan man’s arrest for a crime he did not commit.”

So, it’s only happened once? That we know of, of course…

There’s probably a reason it’s a rare occurrence. As the NYT’s Kashmir Hill explains, the police use the technology because they “feel that face recognition is just too valuable a tool in their tool set to solve crimes. And their defense is that they never arrest somebody based on facial recognition alone, that facial recognition is only what they call an investigative lead. It doesn’t supply probable cause for arrest.”

So… it’s like hearing a name from a snitch or something. Or getting an anonymous tip on the phone. It’s a reason to look at somebody, but not a reason to arrest him.

What happened here, it seems, is that the cops grossly violated the rules, and made a lazy, unjustified arrest of an innocent man. Which you don’t have to have facial recognition to do. You just have to be a bad cop. You don’t need special equipment, you can base a false arrest on all sorts of sloppy police work.

In Williams’ case, the cops didn’t even go see the suspect to see if he looked anything like the picture. They called him on the phone, and when he refused to come in (reasonably assuming it was a crank call), they sent a patrol car to arrest him.

Seems to me having the software as a tool could be very helpful, as long as it’s used as a lead, and not as cause for arrest. The way it was in this one case.

This podcast kept referring to the “bias” involved. But isn’t the problem less one of “bias,” and more one of not following rules? Wouldn’t adhering faithfully to those rules eliminate the problem with using this tool?

I suspect some of my libertarian friends will disagree. But I’d like to hear the reasons…

Like with those cop stories the other day, I urge everyone to listen to the podcast, or at least read the transcript, before commenting…

23 thoughts on “Isn’t this a procedural problem, rather than ‘bias?’”