I guess the McCloskeys were right when they warned that mobs of crazed people were coming for all of us. There they were Thursday night on our own lawn, the lawn of the White House. A great mass of people crowded together, mostly without masks, in the midst of the pandemic, standing repeatedly to cheer lie after trite lie coming from the strange orange man who is their master.

I had wisely taken Jennifer Rubin’s advice and stayed away for most of two nights. When I clicked it on sometime well after 10 and saw one of the orange man’s children — the only supporters he fully trusts — standing on that monstrous platform in that location, I figured he’d be out soon, so I kept the tube on with the sound off until he made his big entrance with OUR house as his backdrop.

I saw all the comments out there about the listlessness of his delivery, which I chalked up to the fact that he was reading a speech put together by people with a passing familiarity with the English language. Which is not his thing. Later, I started hearing the kinds of things he says on his own, as he built toward the end, and the suicidal crowd tried their best to evince enthusiasm, apparently hoping to please him.

I heard the usual lie after lie as he faithfully followed the Bernie strategy. He and his campaign had failed to come up with another approach after the Democrats rejected Bernie and went with Bernie’s opposite, the very personification of what their party traditionally stands for. But what were they going to do? There’s nothing frightening or outrageous about Joe, so they have to fulminate about the socialists.

Beyond that, nothing is memorable.

But I’ll share some things I read this morning, so you can have the benefit of other views.

Fact Checker: First the boring business of reviewing some of the lies themselves and dissecting them. As the Fact Checker says, “President Trump ended the Republican National Convention on Thursday with a tidal wave of tall tales, false claims and revisionist history. Here are 25 claims by the president that caught our attention, along with seven claims by speakers earlier in the evening.” Unfortunately, they don’t do Pinocchios in these roundups, which removes some of the fun.

The rage that fuels Trumpism still burns — David Ignatius provides a warning for everyone to heed, that “smoldering at the center of the populist Republican Party, there’s still the bright orange ball of fury that is Donald Trump — wounded and angry and promising White men in his trademark, code-worded slogan that he’s going to ‘Make America Great Again.'” He warns Joe Biden as well as the rest of us that we have to do more than beat Trump; we have to address the loss of hope among uneducated white men that brought us to this pass. (Of course, now we have a bigger problem than that. Those guys might have brought Trump to prominence, but then the entire Republican Party decided to prostrate itself at his feet. I doubt you’d find many in the audience at the White House who fit in the demographic Ignatius is describing.)

Trump presented the mother of all fabrications on the White House lawn — Dana Milbank addresses the weirdest falsehood on display this week: “Four years ago, when the United States was in the eighth year of an economic expansion and enjoying a time of relative peace and prosperity, Donald Trump saw only carnage. ‘Our convention occurs at a moment of crisis for our nation,’ he told the 2016 Republican National Convention in Cleveland, describing a nation full of ‘death, destruction . . .’ and ‘weakness.’ Now, America actually is in crisis… And Trump, accepting the Republican Party’s nomination for a second term on Thursday night, offered a most counterintuitive assessment: Everything is awesome!”

Biden needs a Sister Souljah moment — George Will’s column basically says that Joe needs to find a way to distinguish himself from the more extreme elements in his constituency. Of course, he’s done that over and over, contrary to all the lies this week about him wanting to “defund the police” and such. But I think Will is trying to tell us he needs to do it in a way that will be understandable to the kind of people who are actually susceptible to Trump’s lies, such as those Ignatius wrote about. Not sure he’s right, but I can see how that would occur to someone this week.

The perfectly logical case for Donald Trump — Alexandra Petri makes similar points to Dana Milbank, but as is her wont, has more fun with it: “Under Donald Trump, America has never been safer. It has also never been more dangerous. We must elect Donald Trump to make us safe again, which he has already made us, never more than we are now, although we also aren’t, and won’t be, unless we elect him! If you see.” Yeah, that’s pretty much what I heard.

And now I look forward to YOUR thoughts… 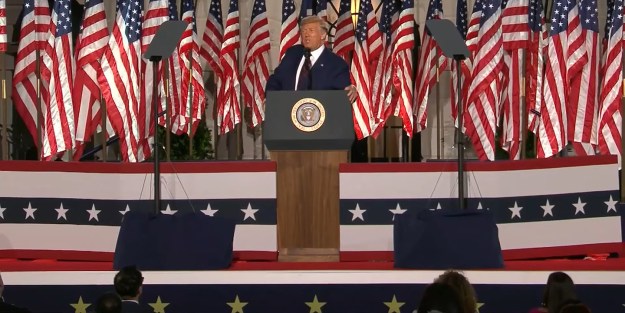