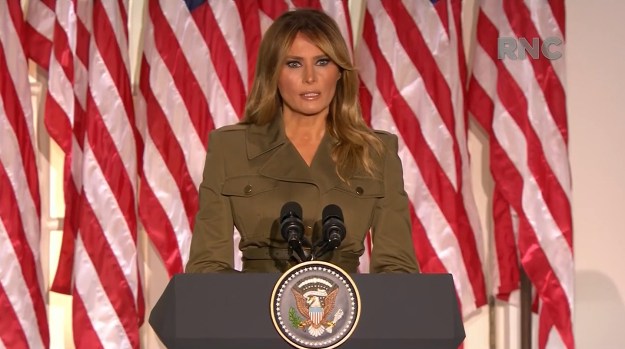 Today, Jennifer Rubin said it’s OK not to watch the RNC. After all, most people aren’t:

And do not worry that you are missing out on what others are absorbing. “The first night of the Republican National Convention averaged 17 million viewers on Monday, a sharp drop of 26% from 2016,” the Los Angeles Times reported. “The audience figure from Nielsen was also below the opening night of last week’s Democratic National Convention, which averaged 19.7 million viewers” over the three major English language broadcast networks and three leading cable news channels.

Relatively few people, it turns out, want to subject themselves to monotonous speeches delivered at high decibels….

Nevertheless, not having read that, I tried again last night. And… I ended up with nothing to say. The only thing that really occurred to me would be to express distress at the way they keep repeating the same absurd lies, over and over: They’re socialists! They want to defund the police! They hate America! Yadda-yadda! (And I’m still puzzling over that one the McCloskeys — Mr. and Mrs. 2020 Republican — trotted out Monday night, that the Democrats would do away with suburbs…)

They just keep shouting those idiotic falsehoods, over and over.

But there was nothing new about that. I experienced the same all Monday night, as well. I think on Tuesday night I just reached the point of being numb. And not comfortably so.

Is that the point? Is that the strategy? Make everyone so numb they can’t think any more?

If so, it’s working. By the time Melania spoke, I was no longer forming impressions. I have nothing to say about anything she said. I did wonder briefly about what she was wearing — was it a dress? a coat? is there a message on the back of this one? — so apparently, the brain still retains the potential to be distracted by trivialities.

Don’t know if I’ll even try tonight. Or if so, I’ll just keep it on with the sound off and then turn it up to listen to Pence. I mean, I don’t think I’ve ever heard the man deliver a speech in the last four years, and he is (shudder) vice president, so I should probably check it out, right? (Please tell me I don’t have to.)