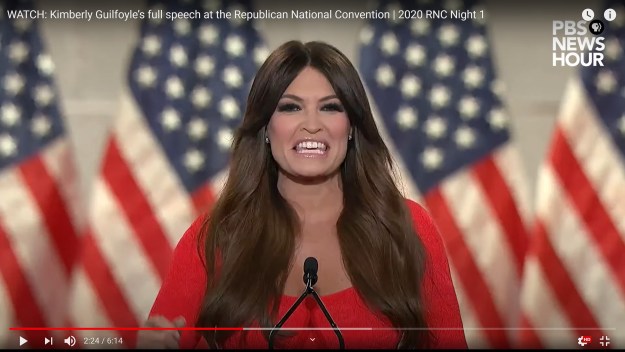 I just thought I’d throw out a few scattered thoughts, which is probably an appropriate way to deal with the odd time I spent watching weirdness on the Boob Tube last night.

We’ll start with the weirdness — people who were there.

The McCloskeys. I would see these people as a parody, an SNL skit — except there was nothing about them that was in the slightest way funny. You’d think there would be, after having seen photos of them on the day that brought them celebrity. I mentioned a couple of days ago that after I rewatched “Spaceballs” during a workout, it hit me “that the tubby guy with the pink shirt, too-long khakis, bare feet and ‘Look at me; I’m a soldier!’ rifle reminds me a lot of Rick Moranis spoofing Darth Vader. The McCloskeys looked so absurd holding their weapons, like they’d never held such objects before, and had no idea what they were for. Like Trump holding that Bible. But then, they came on television unarmed, and all the humor of the situation disappeared. Sitting there, they were like some disorienting twist on “American Gothic.” And then I heard them speak, and their words seemed to have been written by some BLM wokester trying to show us what modern racist white people sound like. All I could say on Twitter was, “Wow, they actually did it! They actually trotted out that sad, strange couple from St. Louis! Now that I’ve heard them speak, I feel MORE embarrassed for them…”

Kimberly Guilfoyle. Wow, OMG, etc. I had recently heard of this person in a context that caused me to Google her. But I had never seen her “live.” It was the strangest thing I’ve ever seen on a convention stage, real or virtual, and I’m including Clint Eastwood talking to the empty chair. All I said was, “So THAT’S Kimberly Guilfoyle, huh? All righty, then. What’s she on?” Initially. Later, I added, “My, my. She got MORE worked up at the end…” Someone explain to me the thought process that led whoever was screening speakers to put this person on the program. Or her strange boyfriend, for that matter — although we know why he was on the agenda, don’t we? I later heard that the word “cocaine” was trending during his performance. I’m glad I missed it.

The rest of the Trump family. I’m sort of looking ahead here, since I see several others of his familial entourage are going to be on tonight. Everyone except, perhaps, his sister. Because, of course, this is not a Republican Party convention. It’s a Trump personality cult convention. As I’ll mention below, you don’t have the usual dignitaries who would place the event within a historical GOP context. You have the kinds of whackadoodles who will pledge everlasting loyalty to the Trump brand. Which includes the family, and a family member’s girlfriend. Which I guess answers my question above as to how Kimberly “I Want to Bite the World with My Big Teeth” Guilfoyle got onto the podium.

Nikki Haley. I missed this. I’m going to go back and find and watch it. But my understanding is that she was sort of the calming influence to set up fellow South Carolinian Tim Scott. Part of the process of transitioning from the loudly crazy. I’ll bet she was good at that. Disappointing that she was there, though. For some time, she’s distanced herself from the Trump circus. It’s rather awful, and something that will always attach to her name to her discredit, that she showed up now to pledge her fealty.

Tim Scott. This was the highlight of the evening. It was a stunning contrast to everything that had gone before, a speech that would not have been out of place at a real Republican convention 30 or 40 years ago. Which is the moment Sen. Scott seems to think he’s living in, speaking of a GOP that’s all about personal responsibility, fiscal restraint, and loving America. I don’t know Tim Scott, by the way. He emerged beyond local Charleston politics after my time dealing professionally with state leaders. I’ve never even met him. But I have the impression that he’s a nice man, a sincere man. A good man, although a terribly deluded man to let himself be used this way. And he brought that to the screen last night. A person who saw nothing but his speech might convince himself, “It’s OK to vote Republican this year! It really is!” But that person would have to do what Tim Scott has done: Ignore everything we’ve seen over the last four years. It was a stroke of towering manipulation to put this nice, decent thoughtful black man on in the slot of honor on the first night, after a couple of hours of manic racist rants. Surely no one’s buying it. Right?

Then, there were the people who were not there:

Any former president or nominee. OK, so only one former president is alive. But this is pretty jarring — the complete lack of anyone whose presence puts a stamp on the legitimacy of the gathering, who says Yes, this is the convention of a party that is both Grand and Old. We’ve never seen this before, and surely no one has missed the point — that all this is about is Donald J. Trump and those who will remake themselves in his image.

Lindsey Graham or Henry McMaster. Not that I missed them at all. But it’s interesting. Before becoming Trump’s mindslaves, these guys pretty much represented what Republicanism was about, in South Carolina anyway. Remember, Henry was Ronald Reagan’s appointee as U.S. attorney, and that sort of affiliation was what defined him for decades. But these South Carolinians were set aside for two who represented a momentary, shockingly bold attempt to pretend that the rest of the evening hadn’t been about white people being terrified by dark people (I mentioned the McCloskeys, right?). So it’s worth noting.

Bob Inglis. God Bless Bob. Bob, of course, was one of the original religious-right conservatives who took over the party in the first half of the 1990s. He was the prototype of the sort of Republican Tim Scott sees himself as. He was a man of principles then, and he’s a man of principles now. Which we saw yesterday.

That’s enough to start a discussion. Have at it… 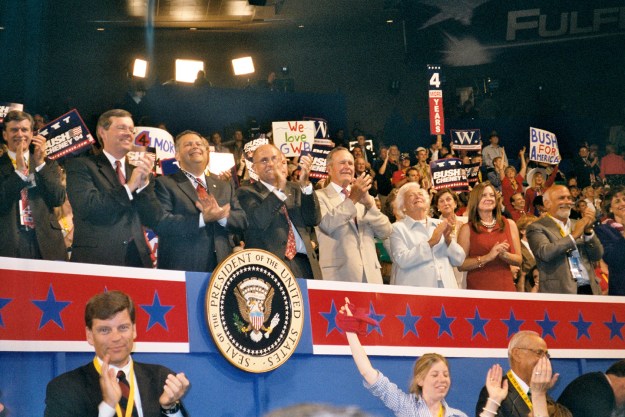 I shot this in 2004, on actual film — which I had to take to a Duane Reade and have digitized so I could send it back to Columbia. As you see, a typical GOP convention of the past — with Bush 41, and Rudy before he became Trump’s boy.