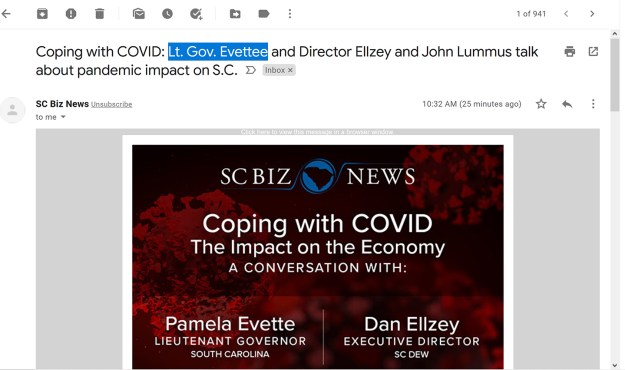 The headline on this email is a relief to me, because it shows I’m far from alone.

Of course, they sort of knew her name, because they spelled it correctly (I think) on the flier. But what I saw first, what jumped out at me and stuck, was the “Lt. Gov. Evettee” in the headline of the email.

Ms. Evettee is not alone here. I started using the term Gov Lite a long time ago, because the office — and therefore the people holding it — were forgettable. Even though all the ones before this one hypothetically had actual job duties — presiding over the Senate and (after senators took pity on Andre Bauer and gave him the additional duty) the Office on Aging.

After I came home to S.C. in 1987 as governmental affairs editor, I found I had little trouble remembering Nick Theodore’s name — not because his duties compelled my awareness, but because he was running so hard for governor from the time I arrived until 1994. He managed to build up his name recognition enough to, just barely, edge out the vastly, infinitely better qualified Joe Riley in a squeaker primary runoff. Joe had been too busy being the best mayor in the country. (That was the most heartbreaking election result in all my years in South Carolina. Joe lost by less than one vote per precinct. Our history would have been quite different — as in, much better — if he had turned out one more person at each polling place. He would have run right over recent party-switcher David Beasley in the general.)

But Nick’s successors were easier to ignore, when they weren’t crashing planes or something.

The current one, the first one to take office after running as the governor’s electoral mate, is remarkably invisible even for a Gov Lite. That was predestined to happen, given that Henry picked someone who made us all say “Who?” and the office being stripped of duties. So it was that when I saw her (at least, I think it was her behind that mask) in this picture from Henry’s inexcusable announcement about giving millions to private schools, I for a moment thought, “Oh, look, there’s…” and couldn’t come up with the name.

“Predestined,” that is, as long as she and Henry won. Had James and Mandy won, you’d have seen something startlingly different.

James had a compelling vision for the role his lieutenant governor would play, and Mandy endorsed it wholeheartedly. She would have been every bit a full partner in governing. She would have been a dynamo, having dramatic impact on events left, right and up the middle.

That moment — with the changes to the office, especially the fact that everything the job had previously entailed was being stripped away, and the fact that the person would be elected in unison with the governor — was a huge opportunity for anyone who truly wanted to make a difference for South Carolina, and James and Mandy were energized by it.

I wrote a press release outlining their vision for the role that Mandy would have played. It was, in fact, one of the more substantial releases I wrote during the campaign — actually setting out a vision that would redefine one of the more visible electoral positions in our state. It transformed the job from meaninglessness to something that made a difference. And it explained clearly why James had chosen Mandy — she was perfect for the vision — and why they were running as they did, as partners, as a team.

And… it got no traction. Initially, it had gotten mixed up in an attempt to help out a reporter. The reporter had the idea of doing something on how the campaigns envisioned the new position, and she had reached out to us about it. So instead of putting out the release generally, we decided to share it first with her. But then she was unable to get to the story for several days, and out of nowhere another reporter asked us how we envisioned the lieutenant governor position, so we (with apologies to the first reporter) gave him the release, and… it all kind of fell apart. There was that one story, and that was it.

I was disappointed enough that I tried putting out the release to everybody some weeks later. Because I wanted to see it get exposure. I wanted voters to have the chance to think about, OK, if I vote for this ticket, here’s what I’ll actually get… I wanted them to see why Mandy was perfect for the job.

But it never became the shiny toy of the day for our state’s ravaged, depleted political press corps.

So I’ll share it with you. I think I’ve done this before, but I couldn’t find it just now, so I’ll share it again. Repeatedly putting out this release has gotten to be a habit for me.

Anyway, this is what you could have had in a lieutenant governor:

He has really a really good answer to that. And when people hear it, they realize why Mandy is perfect for the job.

• Advancing his legislative agenda. With all the partnerships she has formed on both sides of the aisle during her experience in the House, she will greatly extend the influence of the governor’s office in shaping laws and setting policies. As the second most prominent statewide officeholder, her influence in the General Assembly would be considerably greater than that of past legislative liaison staffers.
• Conducting oversight of state agencies. She will engage with the agencies as no one has before, finding ways to make them more efficient, promoting such approaches as zero-based budgeting.
• Playing a key role in the appointment process. “There is tremendous untapped talent in South Carolina, and we don’t take full advantage of that fact,” said Smith. “She will help find and recruit a diverse pool of appointees from across our state, and help me get them in place right away.” He noted that having represented rural South Carolina, she brings a perspective and connections too often left out when appointments are made in Columbia.
• Being closely involved in setting policies and legislative goals. She will not only push the governor’s agenda, but be a full partner in shaping it. And she will seek broad input in that process. For instance, Smith noted, he and Norrell already plan to sit down with mayors from across the state to talk about how the governor and lieutenant governor can help them with their priorities. “We support the agendas of the governments closest to the people, which for too long have been ignored and disrespected on the state level,” he said. As a 20-year municipal attorney, Norrell fully understands the challenges faced by local governments.

Those criteria explain why James chose Mandy. With that job description in mind, he was looking for three traits in a running mate. He wanted someone who:

• Is qualified to be governor. “Mandy would be a formidable candidate for governor on her own,” said Smith.
• Would be ready on Day One. He needed someone who thoroughly understood state government and could immediately jump in and start doing the job he envisions, with no learning curve. Also, someone who knows how to work with this Legislature as it is. “We need to work as well with this Republican General Assembly as Carroll Campbell did with a Democratic one,” said Smith. “Mandy has a great track record of working constructively across the aisle. She respects her Republican colleagues, and they respect her.”
• Meshes well with him and his vision. “Mandy and I already speak with the same voice as we share our positive vision for South Carolina,” Smith said. “I needed someone full of enthusiasm for the future of our state, and no one fits that description better than Mandy Powers Norrell.” 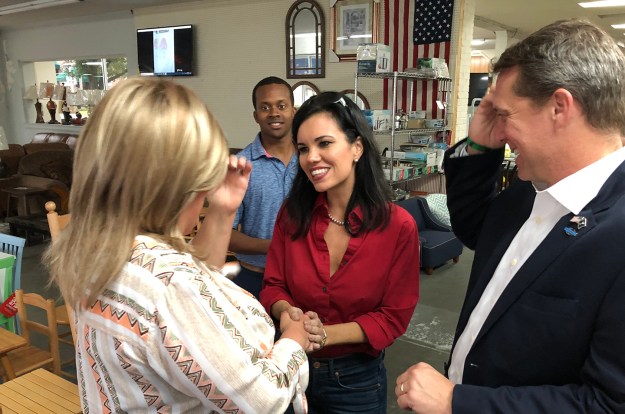 This was from the eve of Election Day. That’s Scott Harriford — who played a key role this year in Joe Biden’s SC primary victory — in the background…