Several months ago, I was thinking my bumper stickers for my state representative Micah Caskey were in sad shape, and I needed some new ones. But then I thought, wait: I don’t think he has opposition (which would mean he probably wouldn’t be buying new ones this year). So I sent him a direct message to check:

Just realized you have no opposition this year (unless I missed something). That’s good, because I hate to see good reps be forced to waste effort and money fighting off gratuitous challenges. But dang — I was hoping to get a new bumper sticker…

But then I thought, if I think my rep’s doing a good job, why not say it publicly? Well, I know the reasons why not (see below), but I did it anyway — adapting that message into a public tweet.

And of course, I caught some criticism for it, as writers of opinion always do when they say something nice about somebody:

Why is it a “waste” to justify your record and stewardship of the public trust? I think that’s called democracy. Maybe @MicahCaskey is doing a good job—the way you test that is an election and in SC far too many legislators are getting a pass. https://t.co/pjUxppn95c

But I let that go, because it’s hard to fully explain on Twitter. But I was alluding to something that’s been a pet peeve of mine for many years.

The critic certainly had a strong point on his side — I’m just sorry he didn’t understand me.

His point is that far too often, incumbents have NO opposition. And many of them are not doing what a fair observer would call a great job. Some of them have no business in public office. Some are complete doofuses. Some are worse than that.

But year in and year out, they glide to reelection without anyone contesting it. And that’s a profound shame. That’s what my critic was talking about.

What I was motivated by was this: Far too often, it seems the only people who DO get opposition are the best people in office. Often (although not so much in Micah’s case — he’s just a good rep without this cause), it’s because of the very thing that makes them good public servants: They represent a district that isn’t drawn to be safe for one party or the other, so they work hard to serve all their constituents. The lack of such districts, by the way, is one of the main reasons the quality of representation has declined.

Anyway, that dynamic causes them to get opposition. Sometimes, it’s as simple as someone in the other party seeing an opportunity because the district is fairly drawn. Other times — and I really hate this with a passion — they have zip to offer, but see the district as drawn more for THEIR party than the other, and think nothing of opposing the good rep just because it’s doable.

Worst of all — although this mainly applies to primaries — they draw opposition because they do such a great job of representing everybody, and the partisan extremists hate that, and run to the far right or (in other parts of the country) left of them, in partisans’ never-ending quest to destroy representative democracy.

Sometimes, good reps draw good opposition. And that can be inspiring, as you get to watch something that should happen ALL the time. Although it tends to make me think: You’re running against a good public servant. Why doesn’t someone like you run against the unopposed idiot in the NEXT district?

In any case, though, such an embarrassment of riches rarely occurs. Usually, the people deciding to take a chance against good reps have little or nothing to offer, and it causes me to hold my breath hoping they don’t win anyway.

So that’s what I meant, and couldn’t say in 280 characters in response to my critic. But as I said, he had a point. And that point is illustrated dramatically by the sample ballot I just pulled up for Nov. 3. Yep, we’ve got some drama going on at the top of the ballot, with wonderful challengers going up against horrendous incumbents — Biden against Trump, Harrison against Graham…

But down at the bottom, it’s pretty sad. Of course, I should make two points about this. First, some of these offices should not be elective offices. It’s ridiculous to ask voters to decide who, say, the coroner is — or even more absurdly, whether that functionary should be a Democrat or a Republican. Second, there’s no opposition in the general because the real election in Lexington County was held in June.

In any case, it’s still sad… 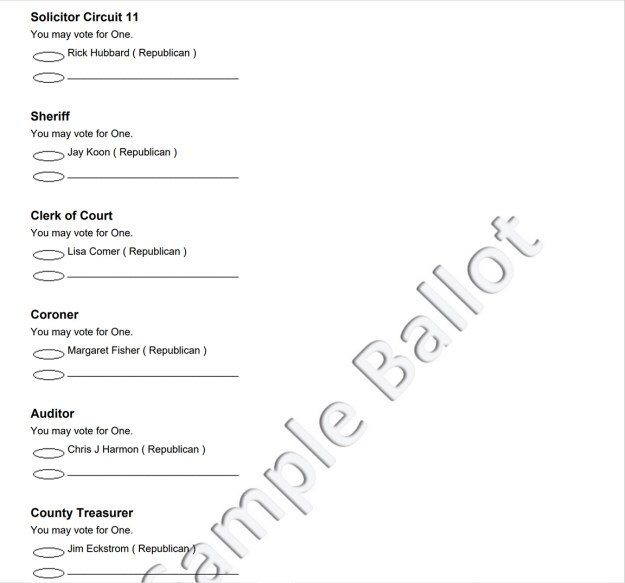 had no general election opposition