OK, this is getting ridiculous.

I found my last “ethnicity estimate” from Ancestry pretty befuddling. But that’s nothing compared to the new one they just gave me.

Last time, here’s what they came up with. And while the changes they had made from before were pretty confusing, it mostly made sense, from what I’ve seen doing my family tree:

Now, they’ve sent me a whole new ballgame, and I don’t understand it at all:

If you look at my tree, I’m mostly English. I have an occasional Scottish ancestor, but probably just as many Welsh ones. The 8 percent seems about right for Wales, but only 17 percent England? (Of course, some of my lines don’t reach back to the Old Country. And a small minority of lines go back more than a few centuries. Maybe I seem English because the English have more intact records. Maybe all my missing ancestors were Scots.)

When Ancestry does this — and I think this is my third “update” or so — they always say something like this:

Don’t worry, your DNA hasn’t changed. What has changed is how much we know about DNA, the amount of data we have available, and the ways we can look at it for clues to your past. You’re still you.

Oh, that makes me all warm and fuzzy.

But how did all my ancestors move to Scotland when I wasnae lookin’? 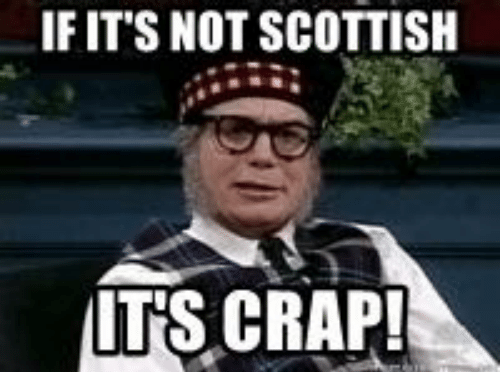 31 thoughts on “How do my ancestors keep moving around? They’re dead, right?”