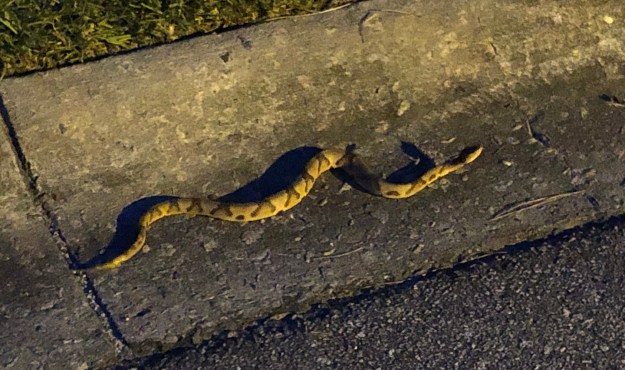 I kind of lost my head last night. I walked up to two people, and got right in their faces, and none of us had masks on. My wife witnessed this, and said she was really surprised to see me do something so careless.

I blame it on the snake.

We were out walking around the neighborhood, at dusk. There was still enough light to clearly see the snake on the road right in front of us, but I didn’t, until my wife warned me to watch out. Which is weird. My brain must not have been functioning right, because I don’t like snakes at all, and the sight of one, even a photograph, usually sets off alarms. Any such movement — and there’s nothing else on the planet like the movement of a snake — in any corner of my field of vision should have had me on full alert.

It was interesting that we saw it right there, because it was only a few yards from one that had been run over a couple of days earlier. Its flattened carcass had still been in the street when I had walked that way earlier in the day.

But this one was very much alive. And we stopped to observe it and debate its nature. I immediately said “copperhead,” but admittedly I tend to call almost anything that has a visible pattern of those colors a copperhead. My wife said its head lacked the menacing triangular shape we tend to associate with pit vipers. I acknowledged this, but stuck to my standard policy of treating it as a copperhead until proved innocent. Which meant staying away from it.

I assure you, I used the limited zoom feature on my phone to take the above photo, which I thought came out rather well, considering the low light. I still don’t like looking at it.

Anyway, about a block and half past that, with the light further dimming and the shade of trees lowering it further, we saw a blackness in the middle of the road that looked remotely like it could be another snake, curled up. A bigger one.

As we cautiously approached and debated, and I had just about decided it was a clump of foliage of some kind, someone asked what we were looking at. It was a teenaged boy who I think had just rolled a garbage bin out to the street. I told him. And I told him about the snake just up the street — well, the two snakes, counting the dead one. And he seemed interested. And I thought, Maybe this is one of those people who are into snakes, and maybe he knows something…

So I said, “I’ve got a picture. Want to see it?” When he nodded, I walked straight over and showed it to him on my phone. Only when we were looking at it with our heads about a foot apart did I realize we weren’t wearing masks.

Then a woman — possibly his mom — arrived and asked what it was, and I immediately forgot what I’d just realized, and went over the show it to her. Only this time I handed the phone to her rather than standing next do her. Still, too close, not to mention handing the phone back and forth.

I don’t think either offered any expert advice. I didn’t get a ruling on the type of snake it was.

Do y’all know? I’d send it to Rudy Mancke, but I don’t think anything this common would interest him.

Anyway, I waited until we were about half a block away before expressing to my wife my surprise at myself for having forgotten basic COVID precautions. She said she was pretty amazed, too. I don’t think she had fully realized what an idiot I can be.

I blame it on the snake….