As you know, I very proudly put out my campaign signs on Labor Day. I live on a corner at the highest point on a long residential street, so I put one set on each street.

Since signs and bumper stickers are new to me — I just started this in the 2018 election — I put thought into it. First and foremost, they were carefully selected to express support for:

Anyway, that’s what those signs represent. And a lot more, of course. In fact, I’ve often thought about putting a third sign up that says, “To understand what these signs mean, read my blog,” with the URL for a relevant post.

I’ve told you about some of my neighbors who have put up the same or similar signs in their yards. And I noticed something I hadn’t seen before: They had placed them far from the road, near their houses. I didn’t talk to them about it, but this indicated to me that they worried about having the signs defaced or destroyed by hostile passersby. 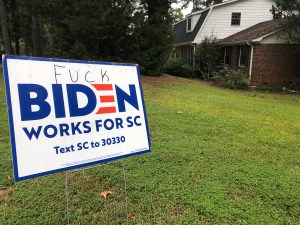 They were less ‘polite’ on this side.

But I didn’t do that. Not because I’m bold or defiant or anything, but because I wanted them to be seen as easily as possible, from the most advantageous angles. And I’ve worked in a campaign, so my attitude is that you can always get more signs.

So now I’m going to some more signs now, after what they did last night to mine. Or rather, to my Biden signs. They left the ones for Jaime untouched. Interesting. Why on Earth would anyone hate Joe Biden — one of the most likable people on the planet — enough to do this? And why spare Jaime, who is running in essentially the same cause — saving the country from people like Trump and Graham?

Anyway, it means that this time I only have to replace two signs. Next time, maybe it will be more. I’ll keep doing that until I can’t get anymore signs. I suppose I’ll be stuck with some Biden/Harris replacement, as the signs I was using from the primary were rarer. Which I regret, because for me it’s about Joe. Nothing in particular against Kamala; she just wouldn’t have been my first choice, and Joe was my guy, 100 percent, from the start. As I say, I’m particular about the signs I put up — I have to be really, REALLY on board.

But I’ll put up what I can get, if it supports Joe.

As you can see below, I’ve already replaced one of them, with the last primary sign I had in the garage. I’ll get more. 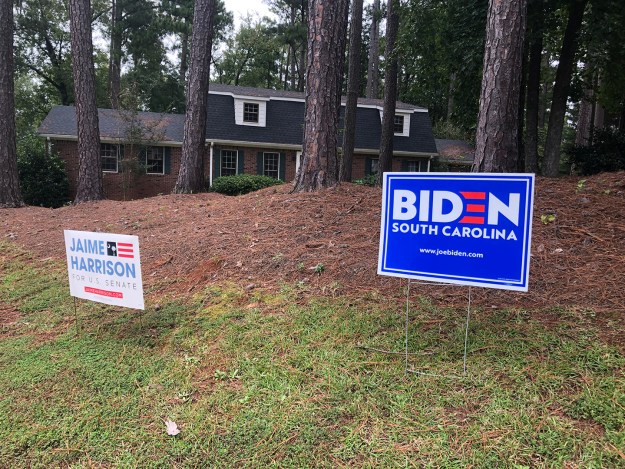 I had to clean some dust off this one from the garage, but I put it up.