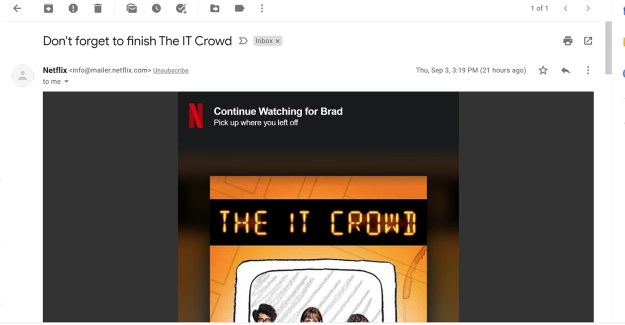 In the course of my life, I’ve had many people try to make me feel guilty about many things — usually successfully. Often, this has involved tasks I started but had not, at the time of being nagged, completed. I have at times become a bit sensitive on this point, I’ll confess.

Now, Netflix has weighed in, via email. But this time, the charge of not having followed through is utterly unjust, and I stand before you an innocent — even laudable, in terms of having applied myself assiduously to the task — man.

I’ll have you know that when it comes to watching “The IT Crowd,” I am an over-achiever. I have “finished” it multiple times. I have watched certain episodes, such as the one Netflix attacks me for stopping on in this instance (“Are We Not Men?”), many more times than that. That is one of the very best in the series, if not the best. It shows what can happen to guys like us — I mean, guys like Roy and Moss — when they make deceitful use of a website that empowers them to talk about football (soccer, to American friends) and therefore seem to be “proper men.” The site teaches them to say things like, “Did you see that ludicrous display last night?” I’ve used that one myself on several occasions (but not always, I’ll admit, with impressive success).

I only stopped on that one this time because I wanted to save it to savor on another occasion. I didn’t want it to get stale on me. It was like not allowing myself to watch “It’s a Wonderful Life” more than once a year, on Christmas Eve. That sort of thing.

I have never been a slacker when it comes to watching. I have not been a Roy. Whenever anyone has asked me to help him or her by watching “The IT Crowd,” I have not hesitated. I have not tried to put anyone off by saying “Have you tried turning it off and on again?” I have immediately stopped whatever I am doing — reading my iPad, playing a video game — and watched it from start to finish.

And I just wanted all of you to know that…. 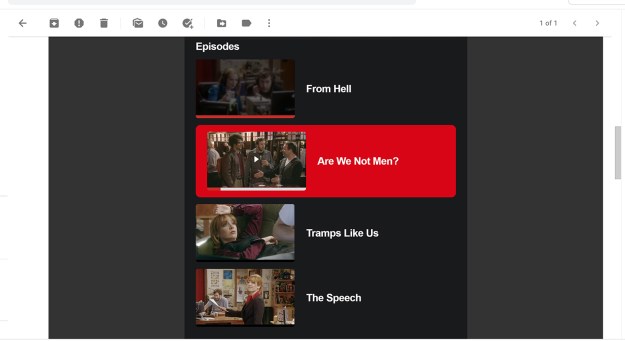 One thought on “Netflix is trying to guilt me into bingeing. Really…”