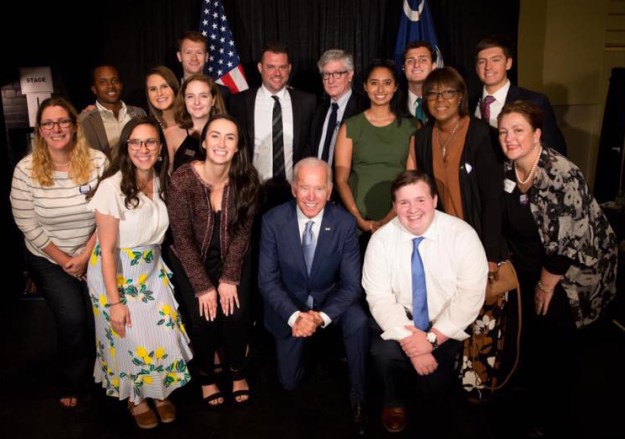 Noah may love Joe almost as much as I do. That’s him in the white shirt and no jacket, a 17-year-old pretty excited to be right next to the ex-veep the day he came to campaign for us in 2018. That’s me in the middle in the back, next to Campaign Manager Scott Hogan.

Today I called my young friend Noah Barker, fellow Smith-Norrell veteran, to talk about yard signs. He’s the one who got me some Biden signs for my neighbors, as related earlier.

Noah, who’s now a student at USC, happened to mention an opinion piece he had written for Medium — a website I had not been familiar with, but which seems to have been around for several years now. He wanted me to take a look at it and see what I thought.

I got a little panicky when I saw the headline, “Make the president Christ-like again.” I thought, whoa, Noah — we both love Joe, but let’s not go overboard! But almost immediately after that, I knew what he meant, and it worked. I could tell that from the photo with the piece: There was Joe with his head humbly bowed standing with his mask on among fellow worshipers — as human as you can get. (It would have gone well with that Facebook post I cited awhile back from Sister Nancy Hendershot — which you should go read if you haven’t.)

I read on, and saw that Noah had done a good job. Here’s his piece:

I don’t often write about my faith. I usually refrain from these types of writing because of two different lessons that I was taught as a child.

The first one was a favorite saying of my grandfather, Wilson Bryan, who would say “Preach the Gospel; if necessary, use words.” He believed that you shouldn’t have to utter the words “well, you know, I’m a Christian.” The way you treat others should show folks that something is fundamentally different about your life.

The other lesson was from Jesus, who according to the Book of Matthew said, “And when you pray, do not be like the hypocrites, for they love to pray standing in the synagogues and on the street corners… But when you pray, go into your room, close the door and pray to your Father, who is unseen” (6:5–6).

However, I’m breaking this rule to write this essay. After watching the Democratic National Convention this past week, I couldn’t keep these thoughts to myself any longer.

It has been hard for me to watch fellow Christians continue to support a man like Donald Trump. He lies, he cheats, he steals. He spews hatred and breeds bigotry. He makes fun of others and he is never hesitant to give an opponent of his a childish nickname (see “Slow Joe” or “Pencil-neck Adam Schiff”). He never forgives and he never asks for forgiveness.

Sometimes, when I am listening to him rant and rave I’m reminded of the words of Paul the Apostle. In his letter to the people of Galatia, Paul outlines the Fruit of the Holy Spirit. In case you haven’t walked by your old Sunday school class and seen that poster in a while, these nine attributes are: love, joy, peace, patience, kindness, goodness, faithfulness, gentleness, and self-control.

I think of these nine attributes because I have never witnessed Donald Trump show any of them in his public life. Now, this has nothing to do with me being a Democrat, which I am. I saw these nine attributes present in the life of George W. Bush, a man that I almost never agreed with. They were also present in the lives of almost-presidents, like John McCain and Mitt Romney.

Now, let me say, I am in no position to question whether someone is a Christian or not. Donald Trump has said that he is and that is between him and God. Full stop.

I don’t mean performing miracles or being perfect; we all fall short of the glory of God.

But, I at least want someone who tries.

Who tries to be kind.

Who tries to be honest.

Who tries to heal the wounds of our nation.

I want a president who uses love to unite us.

Who loves his enemies and prays for those who persecute him.

On the other hand, Joe Biden isn’t perfect, and unlike Donald Trump, Joe would be the first person to tell you that. He’s not the second coming and he’s not the Messiah, and he certainly doesn’t act like he is.

I believe he is a fundamentally decent man, warts and all.

I don’t agree with Joe Biden on everything, but I believe it is our job as voters to choose the better person and in this case, the better man.

That choice is clear to me.

This November, I’m voting to make the president Christ-like again.

Noah describes himself at the end as “78th Governor of Palmetto Boy’s State | Son of Lugoff, South Carolina | UofSC’23 |” 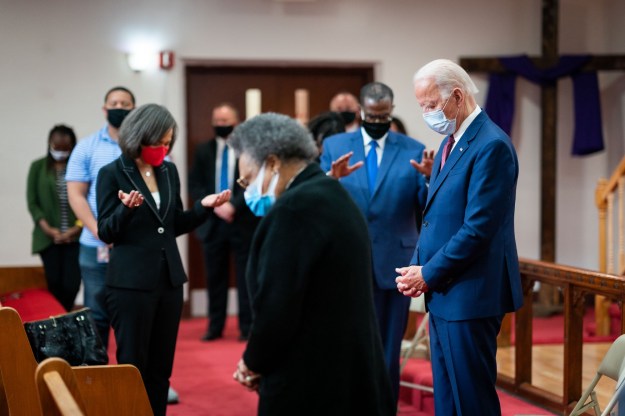