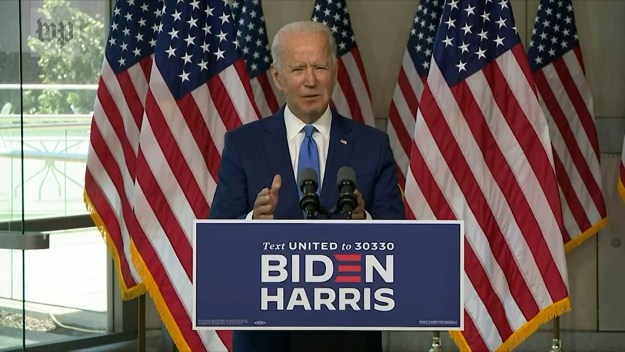 I haven’t had time to go back and listen to Joe’s whole speech yet — although I’ve heard highlights — but I’m eager to do so when I get caught up.

In the meantime, I thought I’d bring your attention to the very encouraging Jennifer Rubin column that brought his address to my attention, which begins, “Democratic presidential nominee Joe Biden gave his most compelling speech of the campaign Sunday, blowing away the notion that the Republicans’ effort to jam through a confirmation to fill the seat held by Justice Ruth Bader Ginsburg is in any fashion a plus for the right….”

As you know, I was pretty depressed at Justice Ginsburg’s untimely death Friday — not because I knew her personally or anything, but because of the effect it was likely to have on the election.

The crux to saving this nation by electing Joe Biden to replace Donald Trump is getting everyone to focus on the fact that Joe represents, is all about, the things that unite us as Americans. And Donald Trump lives to divide us, as he sees dividing us further as his one chance to hold onto power.

And nothing in modern American political life is more divisive than a fight over a Supreme Court opening.

But reading this piece was very encouraging, because Ms. Rubin was essentially saying, “Have more faith in Joe, and in his ability to appeal to our better angels.”

Sure, a lot of people — like me — were out working in the yard, or going to Mass (or, as in my case, both — I had some yard work left over from Saturday and had to get it done by 5:30 Mass) or whatever. So they didn’t catch the speech.

So I’m posting this to spread the word a bit more. I’m going to track down and listen to the whole thing when I get a little more caught up. In the meantime, I celebrate this passage, and urge you to check it out as well:

To jam this nomination through the Senate is just an exercise in raw political power, and I don’t believe the people of this nation will stand for it. President Trump has already made it clear this is about power. Pure and simple. … Action and reaction. Anger and more anger. Sorrow and frustration at the way things are in this country now politically. That’s the cycle that Republican senators will continue to perpetuate if they go down this dangerous path they have put us on.

We need to de-escalate — not escalate. That’s why I appeal to those few Senate Republicans — the handful who will really decide what happens. Please, follow your conscience. Don’t vote to confirm anyone nominated under the circumstances President Trump and Senator McConnell have created. Don’t go there. Uphold your constitutional duty — your conscience. Let the people speak. Cool the flames that have been engulfing our country.

3 thoughts on “Sounds like Joe gave a great speech yesterday”