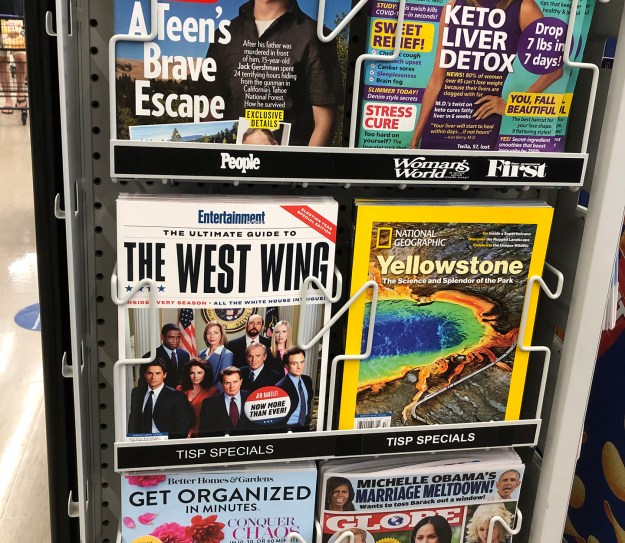 Now THAT is tempting…

I don’t think I’ve ever bought anything from the magazine racks at the grocery checkout.

But a publication devoted to “The West Wing?” Now that’s tempting…

But I still passed.

And you know, part of it is — why do I need a print product full of “West Wing” stuff? Don’t I have Google? Can’t I already access whatever I want about the show, or any of the characters, or analysis or full transcripts of any episode? Content that is available to me wherever I go, via phone or iPad, without carrying around something as awkward as a magazine?

Yep, it’s printed on nice, glossy paper. But here’s the thing… At some point in the latter part of the ’80s, I first saw a color picture on the screen of a Mac. And I was blown away — even though the resolution and color saturation on that screen was probably pretty pathetic, compared to, say, my phone today.

It was just so — bright and alive. Since then, I’ve never seen a hard copy photo that could compare.

Not to mention the fact that if you want to share something in the mag, the person you’re sharing it with has to be standing right next to you. There’s no sharing by text, email or social media.

So… what’s the appeal of the magazine version?

Everything I used to read on paper — the newspapers I subscribe to, magazines, what have you — I now read on my iPad. Which is always with me.