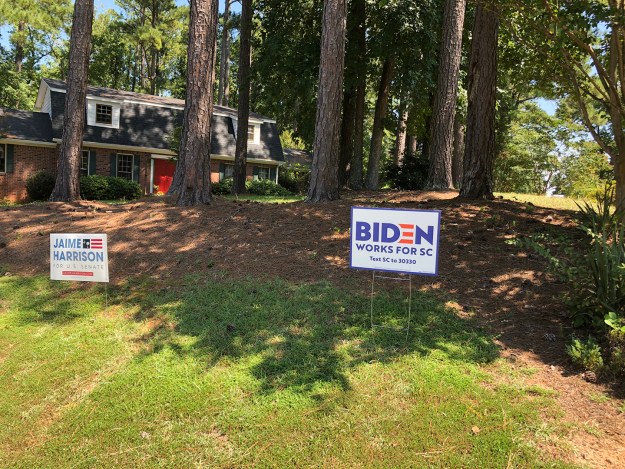 I live on a corner, and if you look over the hill to the right, you can see the very top of one of the signs I have posted on the OTHER street.

I had a nice surprise this morning. My mobile rang, and it was E.J. Dionne! I hadn’t spoken with him in a while, so assuming he was looking for a quote about S.C. or something, I took another swallow of coffee in a desperate and vain effort to make myself sound intelligent. 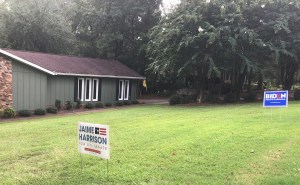 One of my neighbors’.

But no, he had just called to chat. Turns out he is, like me, obsessive about getting his steps in every day, and this is what he has taken to doing while walking — calling people. (I find myself doing the same — that, and listening to podcasts.) We had a wide-ranging conversation. At one point, we got to talking about yard signs. He mentioned having recently discovered a commonality with Rep. Abigail Spanberger — the former CIA officer who was among the cadre of moderates who gave Democrats their House majority by winning purple districts in 2018. They are both big believers in yard signs.

What a coincidence, I said. This being Labor Day, I’m about to put out my yard signs! And now I have, as you can see above.

This, of course, is only my second time ever. My first was 2018, when I dramatically broke with a lifetime in which I was not allowed to do such things. I put out the signs, and proclaimed, “I refuse to be an ‘idiot.’ I’m joining the ranks of the involved.” Those signs were for James Smith (this was a few weeks before I joined his campaign) and Micah Caskey. This time, my Republican state House member has no opposition, so the two candidates are ones James, too, would enthusiastically support: Joe Biden and Jaime Harrison.

I’m hardly the first in my neighborhood. Others didn’t quite wait for this official start of the general election season. Two of my neighbors already had up signs for Joe and Jaime. They had obtained them from me. A couple of months back, one of them — a retired Methodist minister — stopped me on one of my walks to say he needed some signs, and he figured I knew how to get them. I said I’d try to help. 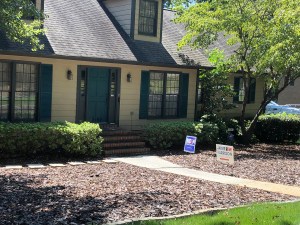 The Jaime Harrison sign was easy. His finance director had the same job in James’ and Mandy’s campaign, so I reached out to her, and she fixed me up with several. But Biden had shut down his Columbia campaign office immediately after the primary (the resources being needed elsewhere), so I wasn’t sure where to go. As it turned out, another fellow Smith/Norrell veteran — now-college student Noah Barker — drove over and dropped some off in the bed of my truck.

So I gave them to John and Jim, and they put them out, so that’s three of us now in my Republican neighborhood who have signs out for both Joe and Jaime.

And when I took my own walk after talking with E.J., I saw a new Harrison sign on my street, which was great, as this was five minutes after I’d put out my own. And it hadn’t been there yesterday. (Obviously, this neighbor is also strict about following the traditional calendar.) 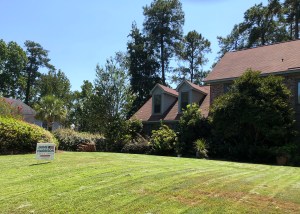 The new one on my street.

But no Biden sign. Which reminds me of my brother’s yard in Greenville. We went to see him back in the first week of August, and he already had a Harrison sign out. Which both pleased me and made me feel guilty. I had obtained one for him when I got those from my friend on the campaign, but had forgotten to take it to him. He got this one from a neighbor who had an extra.

And that one, and the new one in my neighborhood, bring up a worry: I think maybe it’s easier to get Jaime Harrison signs than Joe Biden signs here in South Carolina. Jaime has an active, well-funded, energized campaign going here in the state (and I celebrate all of that), but Joe had no reason for a campaign office after Feb. 29. Those resources were needed elsewhere.

So where do you get Biden signs? Well, I suppose you could get some from the state Democratic Party, but I don’t know; I haven’t checked. Having my own sources, I haven’t needed to — but I suppose that’s where I’d have gone next. But if you live in a Republican neighborhood, like mine or my brother’s, do you think in those terms? Probably not.

I’m going to poke around on this a little more. If there are people out there who would put up Biden signs if they had them, they need to be more available than they are now. Because like E.J. and Rep. Spanberger, I think they help… 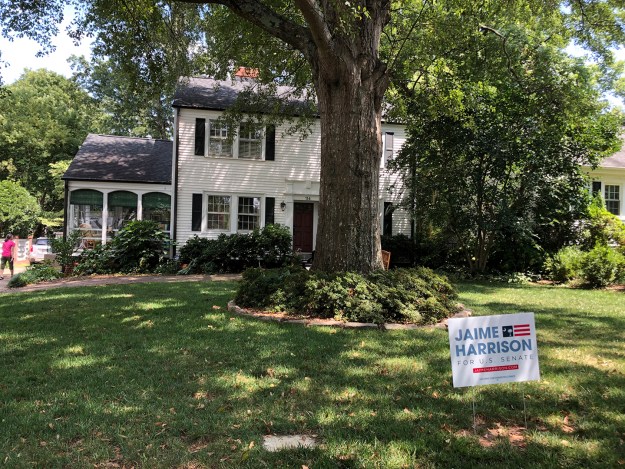 My brother had this one up a month ago, in Greenville.