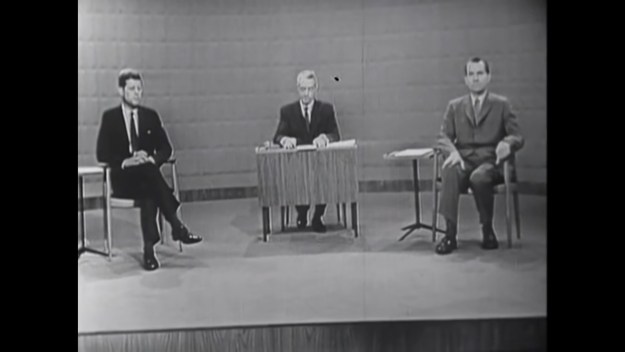 Was there ever a time when presidential debates were useful?

Sure, we can go back and watch the Kennedy-Nixon debates, and mourn for a time when candidates stood there (or, as you see in the awkward photo above, sat there) and talked maturely and coherently about actual issues, and even showed signs of having a few brain cells between them. Halcyon days.

And yet, even those may have turned on such things as the fact that Kennedy was tanned and relaxed, while Nixon was not.

Why do we have these things? So many people consider them to be critical. I don’t see why. They in no way measure skills that are relevant to being president of the United States. Presidents don’t operate in an environment in which people are throwing zingers at them and watching to see how they react.

Life in the Oval Office is the opposite. First, you have time — limited time, but time — to consider what you are going to say and do. Not only that, but you have a vast army of people to whom you can delegate the work of saying and doing — and of doing the research necessary to intelligently decide what to say and do. And those people defer to you. They’re there to do whatever you say, and they deal with you with tremendous respect. They’re not there to trip you up and see how well you recover, as though you were on a TV game show.

I’m not just talking about the extent to which these things have deteriorated intellectually since the days of JFK and Nixon (even if they were valuable then, they aren’t now). That startling decline would be reason enough to abandon them. Basically, they’ve been reduced to something that only has value as fodder for SNL skits. Or rather, it would have such value if SNL had any writers who possessed a sense of humor. (Go back and watch this one if you want to see the potential; there’s been nothing as good since. Yeah, I know I refer to that one a lot. That’s because it was really funny. To see the opposite, watch anything from this season.)

I just wonder whether they were ever useful, even in the Quemoy and Matsu days.

Anyway, they’ve been astoundingly tedious and trying in this round — from the first one in which Kamala Harris nearly scuttled her chance to get on the ticket (fortunately for her, Joe is more forgiving than I am) to last night, when the president of the United States hurled a bunch of attacks that were unintelligible to anyone who doesn’t watch Fox News.

(The amazing thing is that many people today are remarking on how very well Trump did. Which would be astounding to anyone — especially a time traveler from, say, 1960, but really anyone — who hadn’t seen the raving insanity of the previous event. Basically, he said the usual stupid stuff in a more normal tone of voice. And for him, this was progress.)

Yes, it’s finally over. No more crowd of nobodies taking a wild shot at the Democratic nomination and trying to attract attention. No more listening to Trump rant while everyone waits with eagerness to pounce on any imperfection, any at all, from a lifelong stutterer.

If you want to examine Joe Biden’s words, examine these, and vote accordingly:

We can now get on with the election. There are 11 days left…. 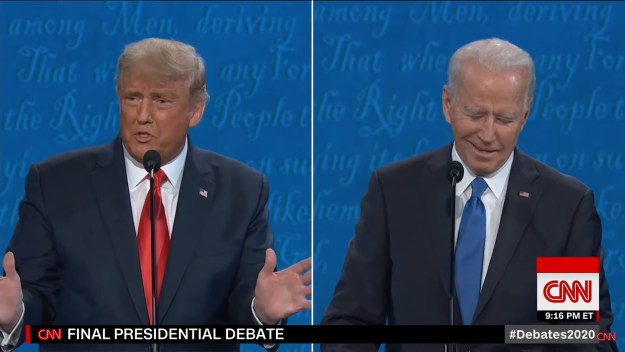 8 thoughts on “Finally, we’re done with the stupid ‘debates’”