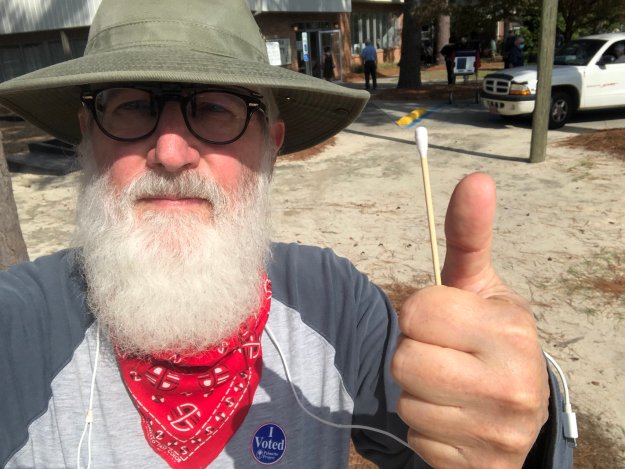 I went with the bandanna rather than a surgical mask, in order to cover my beard. I’m going to mount that cotton swab on a plaque or something…

But seriously, folks… As I mentioned in comments on a previous post yesterday, I cast aside my firm preference for voting on actual Election Day — and I still prefer it — for a number of reasons:

And it worked. I got it done in less than an hour. I congratulated myself on a brilliantly successful coup de main operation. Trump and Lindsey never saw it coming. Not from me, anyway. Just BANG, and I had voted.

By the way, I voted as I reported I would — for Joe, Jaime, Adair and Nikki Setzler. Which should have taken only seconds, but I assure you I was more obsessive than usual about double- and triple-checking every vote at every stage — on the screen, and on the paper printout. I made sure there was zero chance of an error on my part.

Now, about the fact that the availability of this convenient polling place (about half the distance, for me, compared to the election office in Lexington) was kept such a secret…

That morning, thinking about getting out and voting, I had tried to find out what my options were. But when I had Googled “where to vote early near me” and entered my address, I was told that I had to go to Lexington. Other options weren’t offered. (Also, I could have sworn there was no info on the county election office website when I looked before, although it’s there now.)

I found out about it completely inadvertently. A friend sent me a flyer that she had gotten from a Facebook post that someone else had sent her. It was not from the Lexington Election office. It was from the page of the West Columbia Community Center, the place where I ended up voting. I went looking for that post later and couldn’t find it, but I did find a link to a WIS story about these places being opened. If The State, my main local source of news, posted it at any time, I missed it. (A search of thestate.com shows that the last time the full phrase “West Columbia Community Center” appeared in The State was 2015 — but that’s a notoriously bad search engine, so I don’t know.)

So, I can’t really say the county officials hid the information from the public. I’m just not terribly impressed by how well they got the information out. I think maybe it spread by word of mouth during the day yesterday. I voted pretty quickly, but the line grew substantially while I was there, and Bud says he saw something about it on WIS (thank you, WIS, for making the effort to help us know about this) that said people were waiting as long as 90 minutes. Although I don’t know when that was.

Then there’s the fact that the place where I voted — the only place anywhere near me — was only open yesterday, today and tomorrow. And only from 8 a.m. to 5 p.m., rather than full voting hours like on Election Day.

Look, I’m grateful for the opportunity I had yesterday. I want to thank the folks who manned this temporary site — including one of the folks I’m used to seeing at my own precinct on Election Days. I appreciate WIS trying to get the word out. Mostly, I appreciate the chain of people passing around the information that eventually got to me.

But you know, the folks in charge of elections in my county could have gotten the word out better. And they could have had these locations open the whole time, rather than these small snatches of time.

If they had, it would have helped more to keep the madness down on Election Day. I still worry there will be problems (although probably fewer in this county than in Richland — at least ours is an actual county office, rather than one of those notorious Special Purpose Districts).

But I’m glad I got the opportunity, and I’m glad I’m done… 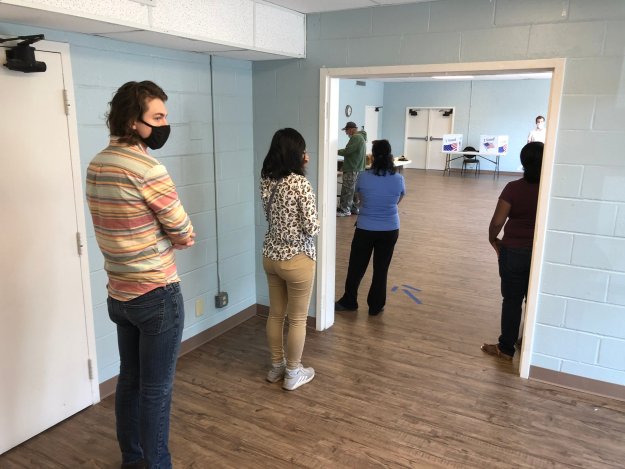 It was pretty exciting when I actually got INSIDE the building, and could see the little voting booths…

23 thoughts on “I’m glad I voted yesterday. Can we count the votes now?”