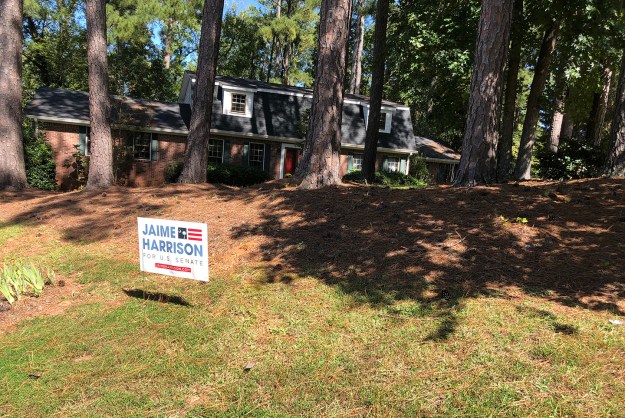 Remember when my Biden signs were vandalized, so I replaced one of them with a blue one I had in my garage?

Well, a few nights later, that one just disappeared, as you can see above. So I guess they’ve moved on to just stealing them.

So I went on Friday to state Democratic headquarters and picked up a couple of their Biden/Harris signs with the map of South Carolina. They’re not as nice as my old Biden signs, but they’re something.

I told the lady at the door what happened, and she asked me I needed two, or four? I said just two for now, but it was nice to know I could go back for more. I also picked up some Jaime Harrison bumper stickers while I was there. They were out of them at the Harrison HQ.

And I put them up Saturday. But I took them down last night before bed — and put them out again this morning. I don’t mind going downtown to get more, but if I can avoid it by taking them in at night, I will — if I can remember. 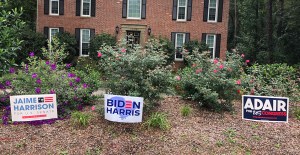 Other neighbors keep putting them up.

By the way, I saw my second Trump sign in my neighborhood yesterday. Between the first and second ones, of course, more Biden signs had gone up in my Republican precinct. I think there’s about eight Biden or Biden/Harrises — no, seven, because one house that had had them vandalized took all signs in a couple of days ago. Which is a shame.

Of course, while some Democratic signs are placed back away from the street — to make the vandals a little more reluctant to approach them — the two Trump signs are closer to the street, where they show up better.

And I guess what that tells us is that even Trump supporters understand that Biden supporters aren’t the sort to deface or steal other people’s signs… (WHOOPS! Had to correct myself on that!) 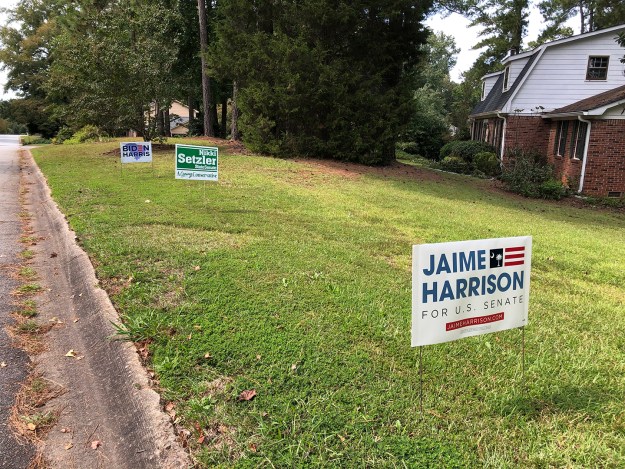 One of my new Bidens is in the distance. I also now have a Nikki Setzler sign.

25 thoughts on “Now they just STEAL the signs”