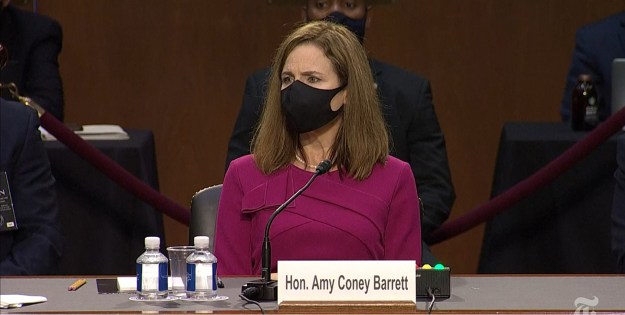 I have a lot of my plate today, but in case y’all want to discuss the hearings going on today, here’s a place to do it.

I provide this with mixed feelings, since I believe any time spent on the explosively divisive issue of confirmation hearings takes away from what we should be talking about, which is the election three weeks from tomorrow.

This morning, my wife had the hearing playing on the radio, and I heard Lindsey Graham speak and then turn the floor over to the very last Democrat we should want to hear from right now, Dianne “Dogma” Feinstein. We turned it off shortly thereafter, thank goodness, because my wife had to do a Zoom call.

Look, folks, the latest poll shows Joe leading by 12 points — nationally, which of course doesn’t matter, although it’s encouraging. Here’s how I reacted:

Not good enough. We all need to buckle down and turn out more and more votes for @JoeBiden … https://t.co/shTZnQcwDF

That’s pretty much how I react to everything right now.

Every word spoken, every action taken from now on by people who want to save this country should be aimed at increasing the victory margin for Joe Biden — in the battleground states first, and then nationally as well. Even if we somehow know that Joe’s going to win — which we don’t — we should work like crazy to double and then triple his victory margin, because we so badly need for Trumpism to be resoundingly, undeniably rejected.

And I don’t see any way that anything said about this court nomination helps in that goal.

But yesterday, Clark Surratt asked me to comment on the Barrett matter, and I obliged, and now I’m going to turn that comment into a post, in case y’all want to talk about this. Which I hope you don’t.

Actually, I didn’t completely oblige Clark, because he said, “I wanted to get your opinion on whether the sub-group (or groups) under the Catholic banner that she belonged to should be grounds for questioning her qualifications for the court.”

Since I haven’t spent time thinking about that, I stepped past it. I’ll come back to it, though, after I share what I did say to Clark, which was the following:

I don’t know much about them, Clark.

As for Judge Barrett, what do I think of her? Not a lot one way or the other. She seems to me to be fairly well qualified, which is what matters. Just as I considered Merrick Garland to be qualified. I’m not a cheerleader for her, nor am I opposed to her being on the court, from what I’ve seen so far.

But then I haven’t studied her that closely. For me, the issue isn’t her. The issue is that I don’t want this supremely politically divisive fight happening right NOW. And I’m pretty furious at the scummy behavior on the parts of McConnell and our own Lindsey Graham that has brought us to this pass.

If McConnell hadn’t done the unforgivable thing he did in the Garland incident — and then reversed himself and then some when HIS priorities were on the line — I wouldn’t be AS upset about it. But this would still be a very unwelcome thing to be happening right now.

I’m very unhappy about this process starting tomorrow, for a lot of reasons. One of them is this: A story in the Post this morning about how Kamala Harris will be in the spotlight, thanks to her role in the Kavanaugh hearings.

Boy, do we not need that right now: Spectacularly divisive hearings in which Joe Biden’s running mate plays a starring role.

Oh, the partisans in the Democratic base might clap and cheer if Sen. Harris is at the forefront of intense grilling of this woman. Yes, partisans will be energized.

And at least as many partisans on the other side will be at least equally energized.

And as I keep saying: Things that divide us benefit Trump. This is why he is always as divisive as possible.

Joe is the antidote to what’s tearing our country apart. But it will be harder to motivate people to vote for that antidote if his running mate is seen as being in the forefront of the thing dividing us.

That’s ONE way this situation is dangerous to the country. There are loads of them out there, most of which I can’t possibly anticipate at this point.

She is going to be confirmed, barring something so far unforeseen. All I can hope for now is that the process will be as calm and quick as possible, and we can put it behind us and be thinking about other things by Election Day.

But with only three weeks left, that is going to be tough…

That’s what I said last night.

But now that I read Clark’s question again, I realize he wasn’t asking what I thought of her affiliations — which is the way I answered, or didn’t answer, him (since I didn’t have any thoughts about them). He was asking whether those affiliations “should be grounds for questioning her qualifications.”

And my answer to that is “No.”

In fact, I hope the hearings don’t go within miles of her religious affiliations. Got that, Sen. “Dogma?” Please, please, please don’t do or say anything that starts Trumps yammering again about how Biden and the Democrats want to “hurt God.” It’s stupid and outrageous, but it stirs up some people, and those people are likely to vote for him.

Anyway, the questions should be about her qualifications, period. Not her religious beliefs or associations. Not her thoughts on the ACA (folks, that’s for Joe to talk about on the stump — we are not adjudicating the ACA in that hearing room today), or Roe, or anything else. The purpose is not to judge her on the judgments she may or not render from the bench.

Judicial philosophy? Sure, OK. Talk originalism or whatever, as long as you stay away from particular cases. But really, the best thing you can do is show that this process is performing its constitutional duty by checking to make sure this lady is prepared to do this job. And, I’m about as sure as I can be, the Senate is going to decide in the end that she is. Keep that in mind, and please don’t do anything stupid and futile to wreck Joe Biden’s chances.

Because that’s what matters.

210 thoughts on “On the subject of these hearings today…”