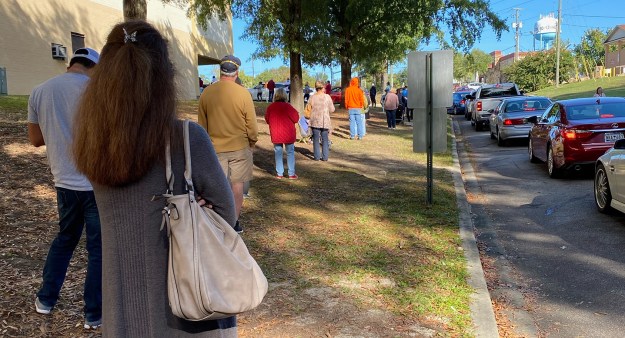 A friend who voted today took this picture while waiting in the queue.

I’m starting to feel doubts. They may not affect my behavior, but I’m having them.

Y’all know how strongly I feel about the importance of turning out and voting with one’s neighbors (which is way communitarian), in person, on actual Election Day. It is to me a major, deeply meaningful ritual of life in America.

But… this is an extraordinary situation, is it not?

First, we have the most important election in my lifetime, one in which we will either save our republic by electing a normal, decent human being as our highest elected official, or drag the country — and the rest of the world, which has been holding its breath for four years waiting for us to fix this — down further and deeper into the mire, the utter degradation.

So, you know, I need to vote, and it needs to count.

Second, we’re in the strangest situation of my life, in which so much about normality has gone out the window. For instance, I may never again go to work at an office, or anywhere other than my home — which overthrows thousands of years of human social and economic behavior. And that’s just one piece of it. I mean, 220,000 Americans are dead from this thing, and it’s far, far from over.

So… maybe I should make an exception in this instance.

Up to now, I’ve held to my resolve to wait until Nov. 3. But each day, more friends and family members go out and vote early — or technically, vote “in-person absentee.”

Which on the one hand supports my plan, by taking pressure off and reducing crowds on the day of. But what if that day is still even more insane, and things break down? I’m pretty sure I’ll get to vote anyway, but what sort of societal breakdown will occur while we’re waiting for all the votes to be counted, and a clear winner to emerge and be accepted?

For that matter, what do y’all do? What have you done already? Some of you have reported in, but what about everybody else? Who’s voted by mail? Who’s done the “in-person absentee” thing? Who’s waiting for Election Day?

I would find it helpful to know…

14 thoughts on “Should I go ahead and vote? Have you?”