Back during the 2018 campaign, I used to say I’d be voting for, and working for, James and Mandy if only for one thing: their promise to expand Medicaid. There were so many other reasons, but that alone would have been enough.

In this election, I can say something similar. Discount everything else… withholding military aid appropriated by Congress to pressure an ally into serving his personal political advantage; talking about “very fine people on both sides;” forcing protesters out of the park so he could stage an amazingly stupid and pointless photo op; firing people who did their duty by testifying truthfully against him; “shithole countries;” getting his crooked friends off the hook with the law; stiff-arming allies and having “love” affairs with tyrants; 220,000 dead from the pandemic… obviously, I could list hundreds of utterly horrific, wildly abnormal things he has done to degrade this country and damage its ideals and interests.

But we would have to do everything we could to get him out of office, and replace him with Joe Biden, if all there was was this:

Advocates for immigrants say they still have not found the parents of 545 minors who were separated from their families starting three years ago during President Trump’s immigration crackdown at the U.S.-Mexico border.

The 545 children are among more than 1,500 who were separated from their parents as far back as July 1, 2017, and they include cases that were part of a pilot immigration program at the time and were not immediately disclosed to the U.S. District Judge who ordered the families reunited in June 2018, said American Civil Liberties Union lawyer Lee Gelernt…. 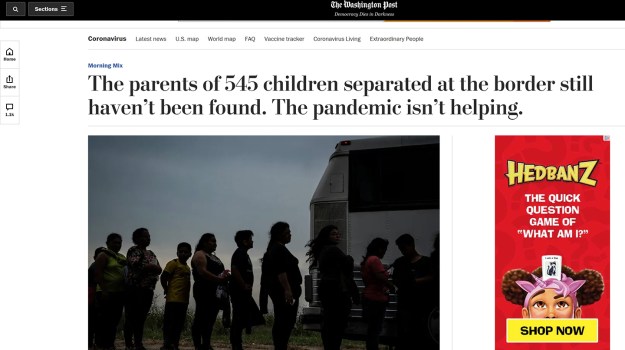