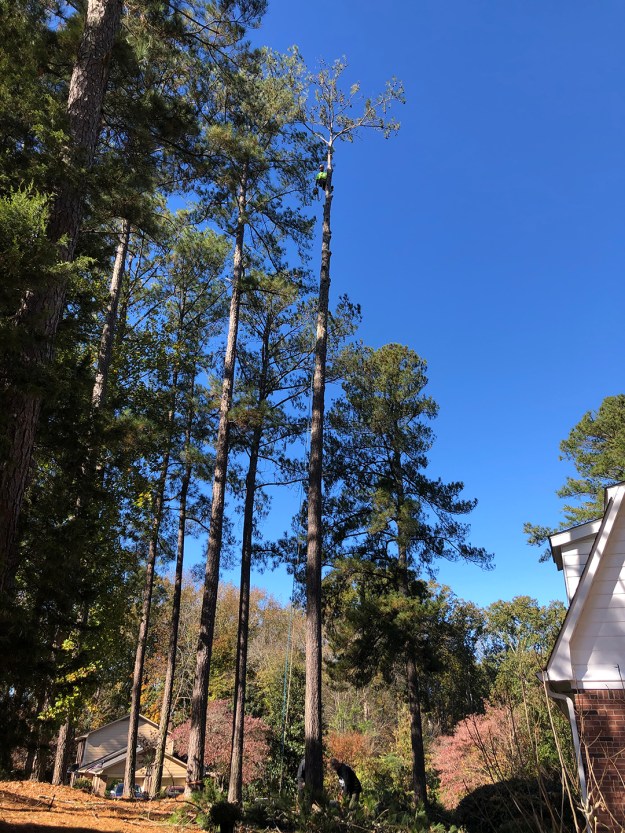 And never was, either. 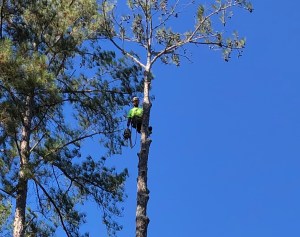 See him up there?

See him up there? There’s a man in the top of an absurdly tall pine tree about 15 or 20 feet before my front door, with a chainsaw dangling from his belt as though it were no more than a hammer — when he’s not using it. As I type this, I hear the loud buzz of the saw, punctuated by the shaking of the house when the massive logs he’s cutting crash into the ground. (See the little dormer sticking out from the second story in the picture? That’s where I am — my home office, where I do jobs more my speed.)

There are all sorts of jobs I think I could do, or have done. But this is not one of them. I wish I could, because I could save a lot of money if I could do this. But even when I was as young and light and strong as this fellow, I could not have done it. I don’t have a head for heights, to say the least. Climbing on a step ladder tests the limits of my tolerance for altitude. I’ve roofed houses, but I generally stayed away from the edges and tried to forget where I was to a certain extent. And I haven’t done that in a while.

So the tree service is removing this one, and another one they cut down late Saturday. Then, they’ll get to the one we’re most concerned about, the massive one with ominous branches that project out over the deck we’ve spent so much time rebuilding — and which spatters pine sap here and there so we don’t forget to worry about it.

I’m looking forward to watching that. It’s going to involve tying ropes to the branches so they just hang there when cut, to protect the house. It will be like watching the swaying of a new mast in one of my Aubrey/Maturin books. A delicate operation, and a triumph when done.

While the young man was at the top of the first tree Saturday, I had out my own (electric) chain saw, removing a large shrub at the corner of the house. That’s about my speed. I had a talk with the climber before he went up — I’ve seen this done before, and I always wonder: How does your chain saw cut so quickly and easily (and repeatedly) through a whole tree? I asked whether he put on a fresh chain before every tree. Because that’s the only time my saw cuts like that — when the chain is new.

Nope. Of course not. He’s a professional. He sharpens it himself. You ever sharpen a chain saw? It’s tedious, and tricky. And as I saw, he evidently does a good job, so it goes through the tree like the proverbial hot knife.

When I took the picture above a few minutes ago, the topman recognized me from our talk and waved. I waved back, thinking, “Better you than me up there.”

Yeah, my headline is a paraphrase of the title of the Nick Adams story. The one in which Nick isn’t quite right following his Hemingwayan Wound — a traumatic brain injury, as we’d call it today. Because that is definitely not a way I’d ever be — you’ll never get me up there…. 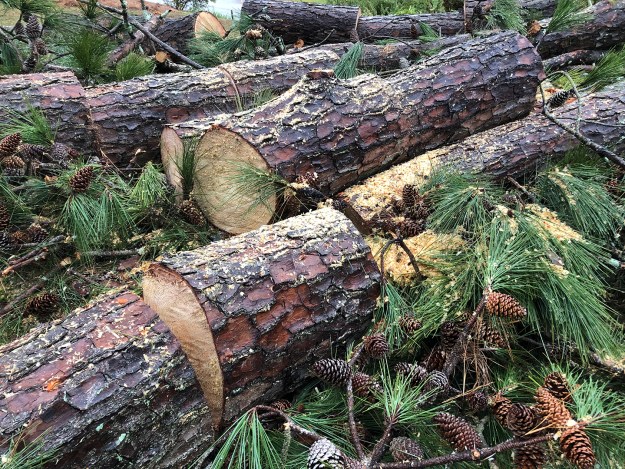