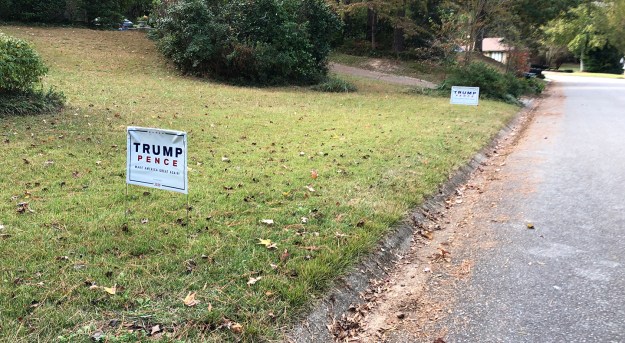 Well, I have some good news. I went for a midday walk today, and didn’t see any Trump campaign signs in the neighborhood.

You may find that unremarkable. But you don’t know the whole story.

After I came back from Memphis — we’re talking the day or so after the election — I saw them for the first time: Two Trump/Pence signs, both in the same yard but spaced as far apart as possible, perhaps to give the impression that they were in more than one yard. I had seen this before — someone a couple of blocks away had resorted to the same approach, perhaps in an effort to compensate for the fact that there were so very many more Biden signs in Quail Hollow.

No biggie. I had taken down my signs the minute I got home, but not everyone had done so yet. One neighbor with signs for Biden/Harris, Jaime Harrison and Adair Boroughs left them up for another week.

But here’s the thing: I had not seen those two Trump signs before the election. That’s OK, I said. My last walk that way had been two or even three days before the election. Maybe this neighbor had put them up on the very last day, while we were driving to Memphis. It was possible. And then, I thought, making excuses, he had decided to keep them up for a bit, having just erected them.

But then they were there the next day, and the next, and the next. The three signs for Democrats in that other neighbor’s yard came down about a week ago, but these stayed.

Perhaps, I thought with dismay (after all, this is someone in my neighborhood, not some famous loony way off in D.C.), this was in support of the incumbent’s — sorry, but I’m going to have to use that word — unprecedented refusal to concede the election he has so clearly lost.

And they stayed up. They were still there yesterday, Nov. 19.

But today they were gone. Thank Goodness.

Now, no doubt, it’s only a matter of minutes before Trump himself does the grownup thing, right? I said, right?…

61 thoughts on “My neighbor gave it up. So now Trump will too, right?”