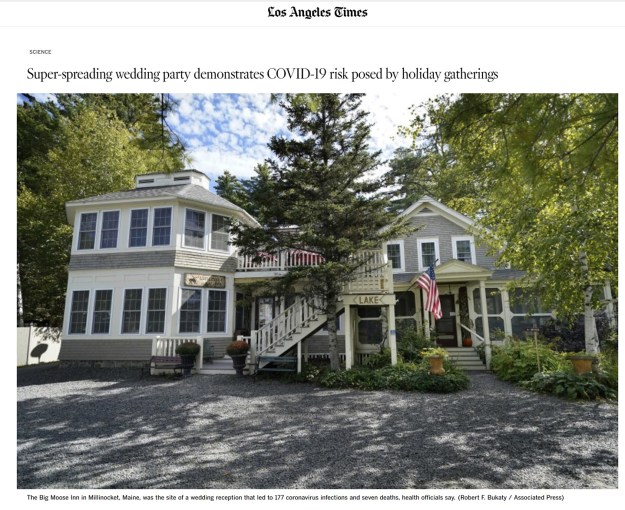 You know, I had looked forward to doing some fun posts after the election was over, what with the madness of Trump behind us. Maybe even some silly ones.

But now, you know, he’s refusing to get himself behind us. Which is sometimes amusing, of course. See this video. But with Joe trying to set up a new government and save the country and all and Trump’s games getting in the way of that, the joke has worn thin. And then there’s things like Trump pushing for war with Iran last week, before his pals talked him down. Which is also kind of a buzz-killer. Oh, and have you heard that our own senior senator has been over messing with Georgia, trying to get them to throw out valid votes? Yeah….

Meanwhile, we have the coronavirus. The big new wave is coming, and we’re not ready. And the holidays are coming up, and with almost half the country having just voted for Donald J. Trump, I’m sort of guessing there might be two or three or even more people out there who won’t make the slightest effort to avoid large, unmasked gatherings.

So, no fun posts for now. But maybe this is a good time to share this story from The Los Angeles Times the other day. Let me set it up for you.

In August, seven people left California to have a wedding in Maine. The group consisted of the happy couple and five members of the groom’s family (making me guess the bride was from Maine, but I don’t know).

They had a reception at the Big Moose Inn in Millinocket, Me. There were 55 people there.

OK, right off the bat you want to yell, “Why are you traveling to Maine to have a gathering of people?” But in their defense, they did take some precautions. The entire party that traveled across the country got tested as soon as they got to civilization — I mean, to the East Coast. They were all negative. “At the time, Millinocket had not reported a single case of COVID-19.”

The servers at the reception wore masks, and took the temperatures of every guest as they entered. So, sorta kinda good so far.

Of course, at the time in Maine, gatherings of more than 50 people were not allowed. But hey, they only went five over, right? Unfortunately, although signs were posted saying everyone was required to wear masks, “guests did not comply,” according to a report by the Maine Center for Disease Control and Prevention.

And you see, there was one person there who was infected.

Others at the party got it, and with shocking carelessness, went to work and public events after starting to get sick.

Eventually, 176 people in addition to the index case got the virus. Seven of those people died.

None of the victims who lost their lives had attended the party.

It’s quite a story, compellingly told. I recommend you read the whole thing…

6 thoughts on “The wedding party that infected 176 people, and killed seven”