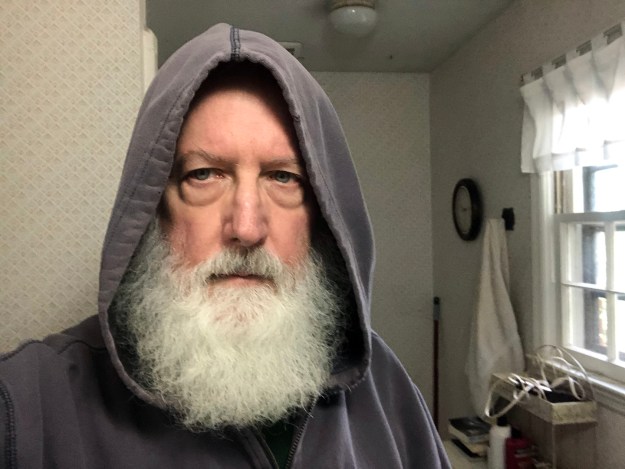 I shaved my beard off on All Saints Day. The night before, I’d been trick-or-treating with most of my grandchildren, and they informed me I had missed a big opportunity: I should have dressed as a wizard!

They were right, of course. So before shaving the next day, I did a selfie with a hoodie on. Not just any hoodie. The hoods on many of them don’t have enough material to cover my big head. This one, which is getting kind of ragged now, has a comfortably capacious cowl, which helps approximate a sort of Gandalf effect.

See what I mean?

No, I’m not going to share an “after” picture. I don’t like the way I look without the beard. My visage is less… wise, mysterious, knowing. Less esoteric. Now I’m just this guy, you know?

Looking back at the picture above now, it occurs to me I’d like to have a wizard I could go see, and ask some questions. Not about getting a brain or a heart, and definitely not to get me back to Kansas — I came home in 1987 to get away from Kansas. I have other questions these days. Here are a few:

Well, there’s more, but that’s probably enough for now. Maybe I’ll ask more questions another time, if that dude in the strange green outfit will let me in…