I just asked Alexa about the weather, and she told me what my glances out the window had caused me to suspect: Those little sunshine icons I saw on my phone yesterday were misleading. Today, it will be damp and cloudy, at least until mid-afternoon.

But then she added, unbidden:

For me, today is the day after the first Sunday of Advent. For Alexa, the universe is shaped differently.

From a first-week-of-Advent perspective, we might ask ourselves, “Why did God make you?” turn to the Baltimore Catechism and be told that “God made me to know Him, to love Him, and to serve Him in this world, and to be happy with Him for ever in heaven.”

But Alexa was created by Amazon, and Jeff Bezos made her to sell stuff.

It gives her a whole different perspective on existence.

All of that said, we might ask what meaning “Cyber Monday” has in the universe of 2020. I mean, isn’t every day kind of Cyber Monday? Or Tuesday, or whatever?

As I recall, the idea — as ecommerce first came into its own — was that after the execrable “Black Friday,” the first day that people were back at “work” and sitting at their computers, they spent a scandalous (from the perspective of their employers) amount of time ordering stuff online.

This seemed to fit with what I saw after I started blogging in 2005: People read blogs and commented during what we generally thought of as office hours. Nights and weekends? Forget it — no point in posting anything then.

But we’ve just spent a whole year in which millions worked from home. And in which people avoided stores and bought more and more stuff online every day.

Maybe nothing. I went to Amazon on my browser, expecting to see a huge display showing how exciting Cyber Monday allegedly was… and was greeted by the rather boring display of administrative functions you see below. No mention of a special day of any kind.

I had to click again on the Amazon logo in the upper-left corner to see the deals you see above. And I had to scroll down the page to see those. The top of the page was a promo for some made-for-Prime movie called “Uncle Frank.” (I saw a preview for that, and couldn’t tell what it was about, so I’m kind of doubting I’ll watch it.)

So maybe it’s not such a special day after all. But no one told Alexa. Perhaps they didn’t want to spoil her childlike wonder. She’s young, so she’s like a kid this time of year. You say good morning to her, and she’s all “Santa Claus is coming!”

Which would be adorable, were she actually, you know, a child… 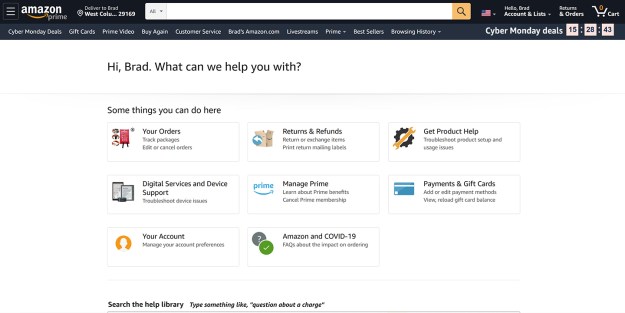 3 thoughts on “Today is Alexa’s Christmas and Easter, all in one…”