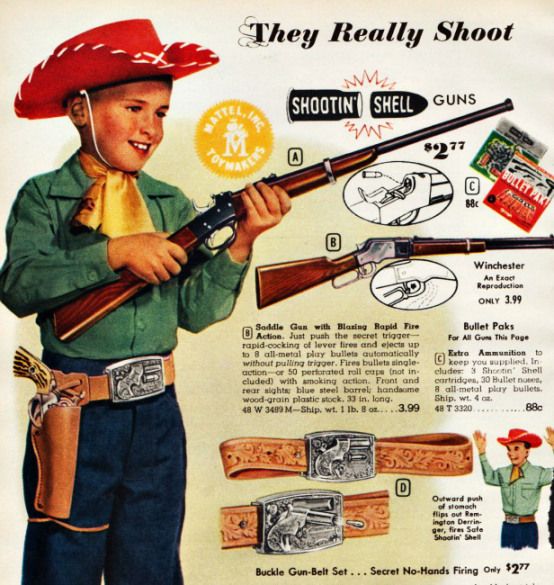 Pinterest is the oddest of social media. I call it up every once in a while to see what it thinks I’m interested in now. This, of course, is heavily influenced by what I called up to glance at last time. For instance, I recently saved a picture of John Wayne, in full cowboy gear, seeming to do an impression of Steve McQueen in “The Great Escape” by sitting on a motorcycle. So the next time I looked, there was the Duke in a similar outfit sitting on a regular bicycle. Odd. It’s not even a particularly special bike, like Pee Wee’s. Pinterest just thinks I’ve got a thing about John Wayne on two-wheeled vehicles.

Of course, some things are odder than others.

I was delighted this week to run across this ad for genuine Mattel Shootin’ Shell toy guns. There were few things I liked better as a kid — because, you know, “They really shoot.” I had that pistol! And I had that gunbelt, with the trick buckle that contained a derringer that popped out and fired when you stuck your belly out, totally surprising your adversary who thought he had the drop on you, with your hands reachin’ for the sky and everything! (Note the illustration in the bottom right corner.)

And I think maybe I had the rifle. I didn’t remember it until I saw the little illustration where someone is breech-loading it, and that rang a bell. Or maybe I knew someone who had one. I was more of a pistolero.

This ad made me want to run update my Amazon gift list. These are real Christmas presents — exactly what a kid wants to find under the tree. And look — the rifle is only $3.99!

I also had, as I think I’ve mentioned before, the guy you could have shootouts with. He was this little mannequin who, when you pulled a string, would start to move his arm to draw on you, but if you fired first and your genuine Shootin’ Shell slug hit him, he stopped. If you weren’t fast enough or accurate enough, he would fire his cap gun and you were on the way to Boot Hill. Hypothetically. You could always, of course (in keeping with play conventions of that day), say he just winged you, and that you got him immediately after. In any case, I always survived these encounters.

Yeah, boys were weird back then. Really, really weird. We didn’t go out without our cowboy guns on. This could have been a long Wyatt Earp gun, or a “Wanted: Dead or Alive” sawed-off rifle, or Mattel’s predecessor to Shootin’ Shell, the Fanner 50. Or just a generic shooting iron from the dime store. It didn’t matter, as long as we were armed. Armed like cowboys, I mean. No, let me restate that again: Armed like “cowboys” we saw on TV and in the movies.

How weird were we? Well, I fully realized the answer to that when Pinterest showed me the illustration below, from an ad for underwear.

Of course, it is utterly ridiculous — it would never occur to us to do that, because Mom would never let you go out into the street for a showdown like that (note how Mom is keeping an eye on that weird kid). Also, you might shoot off something you would value greatly later in life. But it does help show how very strange we were about toy guns…

In our defense, though, this ad indicates that we boys weren’t the only weird ones back in the day. Grown ladies, apparently, also had a penchant for bearing arms while in their underwear. Or whatever that is she’s wearing…

2 thoughts on “I’m… dreaming of a weird… Christmas…”