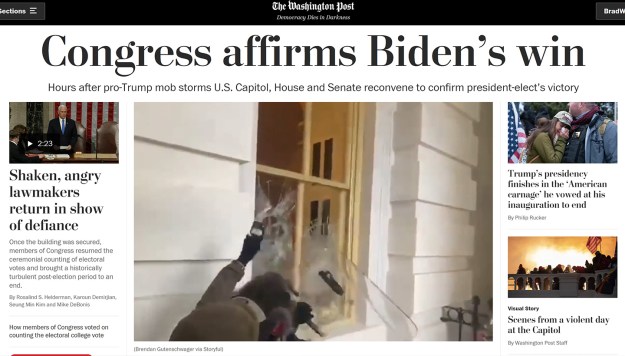 I just wanted to share with you this “how they voted” from The Washington Post. This list neatly divides Congress between those who may arguably deserve to be there (to widely varying degrees) and those who unquestionably do not.

The ones from South Carolina who unquestionably do not include:

Lindsey Graham didn’t vote with them, but he tried to have it both ways, saying “I prayed Joe Biden would lose.” How dare he so blaspheme against God, and his country? Yeah, I get it. You’re saying that “even a guy like me” accepts the election result — at long last, after trying to involve yourself in Trump’s efforts to overthrow that result. But this was a day for showing profound remorse for all you’ve done the past four years.

Nancy Mace surprised us a bit — pleasantly, considering that she ran as a Trump ally (to the extent that I paid attention to that district). Tim Scott less so, because I think at heart he’s a pretty decent, although deluded, guy. (I think his speech was the high point of the Republican National Convention. Of course, that’s like being at the top of a molehill at the bottom of the Grand Canyon, but I’m speaking relatively. As in, you know, he wasn’t Kimberly Guilfoyle.)

But the main thing is that you remember the five. And all those from other states who put themselves on the list.

I’ll close with a thought from my Republican state representative:

When Ted Cruz and Josh Hawley come here in 2024 asking for my help they can kiss my ass. https://t.co/oHPxwZT1gj

14 thoughts on “Remember their names. Remember what they did.”