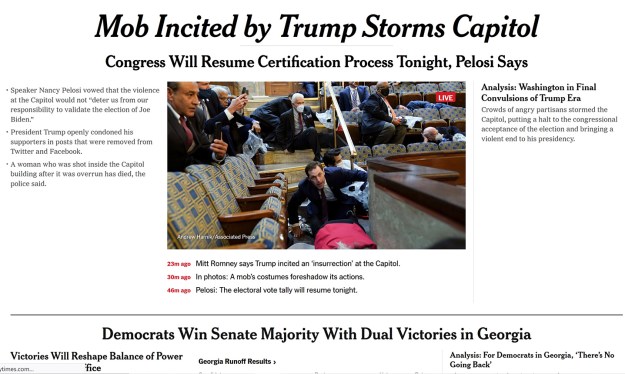 There was just so much going on at the same time, even before the barbarians knocked down the gates of our nation’s seat of government and defiled the place where our laws are made.

Even before that, so much history was being made…

I’d been scoffing for weeks at all the people talking about Georgia “turning blue,” just because Joe Biden — who, if we were a nation of rational people, should have swept the vote in every state — managed to squeak by there by 11,000 votes. The “blueness” was something yet to be demonstrated. There were a lot of things going on as the two Senate races ground slowly toward the runoff that seemed to take eons to arrive. Too many to predict what would happen, as the nation focused not only its attention, but ungodly amounts of resources, on the state next door to us. Any one of a number of combinations could have come out of all that. But the one that came was that the Democrats — who, in case you hadn’t noticed, don’t win Senate seats in the Deep South — won BOTH seats, and the slimmest of advantages in the Senate.

So I guess Georgia has indeed “turned blue,” to the extent such phrases have meaning. Or purple, anyway. For my part, I was happy for my man Joe Biden. The restoration I’ve been hoping and praying for will come easier now. Not easy, but easier.

That should have been the whole story — it was big enough to keep the country busy trying to absorb it for some time to come.

But because of our intolerable situation in which we’ve found ourselves the past four years — having Donald J. Trump as our president, and the Republican Party enslaved to him — a boring little bit of processing that none of us have ever paid attention to before, the acceptance of the Electoral College’s verdict on a presidential election, was going to have everyone riveted all day. We would watch as the (Thank God) rational majority dealt with a wretched, nauseating spectacle being perpetrated by my own congressman, Joe Wilson, and a bunch of other despicable loonies such as Ted Cruz. (Remember Lindsey Graham, who used to be a decent human being? He once said nominating either Trump or Cruz would be the death of the Republican Party. “Whether it’s death by being shot or poisoning doesn’t really matter,” he said. He was right. Back then. The gun went off and the poison fully kicked in today.)

It was low, grotesque farce that would accomplish nothing. But until it was over, we’d be riveted nonetheless — while waiting for the final assurance out of Georgia, which still hadn’t come at midday, when Donald J. Trump started shoveling truckloads of steaming bovine excrement to a crowd that loved him.

Lost amid all that was some very good news: Biden plans to nominate Merrick Garland as his attorney general. That was wonderful to read — not just a great move by Joe in filling a key position, but a moment of historic justice. But no one was really noticing. By the way, E.J. Dionne wrote a good piece about why this would be great weeks ago, when we all had time to think about such normal things. I recommend it.

And then, of course, came the determined attack of the home-grown America-haters on our Capitol.

That had so many aspects, and they are so profound in implication, that all I can do tonight is throw out a few bullets that may start conversation. Each is just a thumbnail. Each bullet could be a book. But let me throw them out:

The story continues into the night, and I don’t know what will happen next.

But I expect this: Members of Congress are going on to carry out the routine task for which they assembled today — before being interrupted for four hours. The criminals failed, just as their hero has failed, completely.

Joe Biden will become president. His party will — barely — control the Senate. The job of restoring our country — starting with defeating the coronavirus — won’t be easy. But it will go on, and I believe it will prevail.

But we will never forget this dark day. Or those who made it happen — those who hold offices of trust and have defiled them, and those who did not.

18 thoughts on “The day Trump’s mobs stormed the U.S. Capitol”