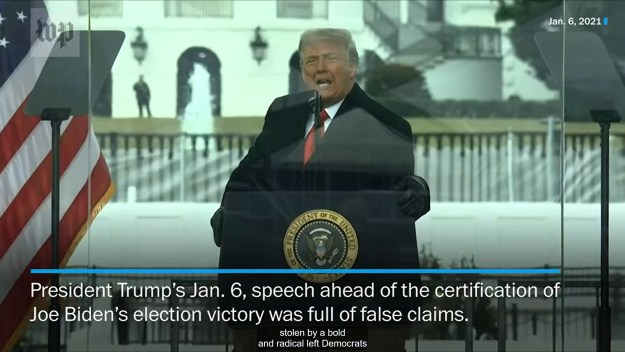 Just don’t forget for a moment how he CREATED this situation….

Yes, I know that sounds like a stupid question, but hear me out.

I keep hearing people talk about Donald John Trump’s culpability — which no rational person can challenge — for what happened that day. I hear clips of what he said. Got it. No question that he incited them to act, on that day.

But what happened that day — his actual appearance before them at that rally — was just the cherry on top.

Why don’t people talk more (and they do some, but not enough) about what he’d been doing every day for more than two months before that? The crime for which he should be convicted by the Senate should be spending all those weeks creating the mob that he was speaking to on Jan. 6 — assembling it, bringing it into being.

If not for that, those people would not have been in Washington on Jan. 6, filled with insane and treasonous delusions, to begin with.

And I’m not hearing enough about that.

If the President of the United States — and that’s what he was at the time, to our nation’s everlasting shame — had not claimed, day after day, that the election had been stolen from him, a complete and obvious lie which he was unable to support with any evidence, that “Stop the Steal” movement would not have existed. Those astoundingly gullible people would all have been far away, in their homes. There would have been no one to stir up and egg on to attack the Capitol.

Of course, in a way, I’m doing what those who make the mistake of concentrating on Jan. 6 do — I’m leaving out a huge chunk of the evidence. I’m not even getting into those months before the election when he was preparing the way for his treasonous lie — telling all those people, over and over, that the vote could not be trusted.

Leave out what happened on Jan. 6, and there is already no question that he is guilty of what the House has impeached him for doing. No honest senator could possibly do anything but vote to convict.

Of course, you can say the same about what he did on the 6th alone. But don’t leave the rest of it out. Consider all the evil he has done — not only grabbing control of the situation for his nefarious ends in the moment, but having created the situation to begin with…

19 thoughts on “Why do we keep talking about January 6th?”