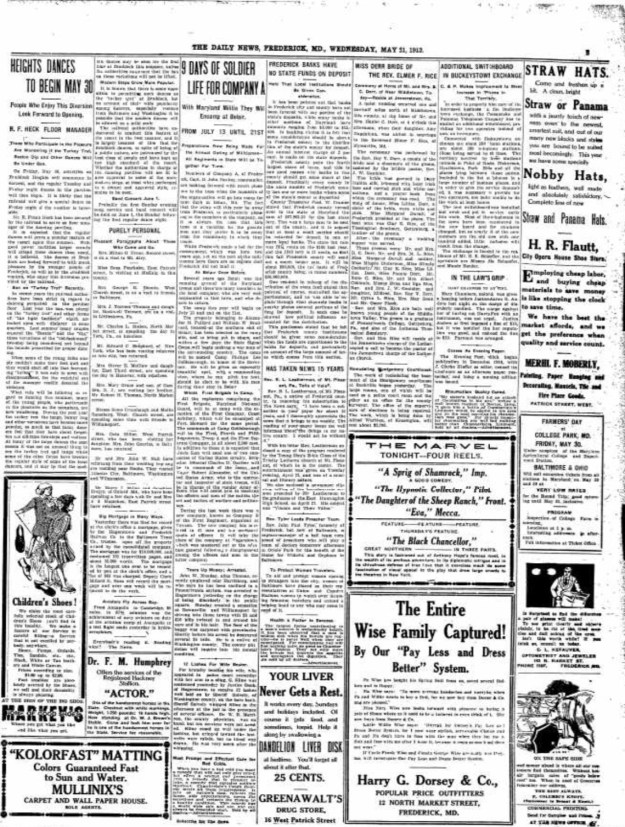 The full page from which the items below are excerpted.

Newspapers used to be fascinating.

No, this isn’t a post about how “newspapers were better back in my day.” We’re talking about way before my day. As in my great-grandfather’s day.

If you’re an Ancestry member, you’re familiar with the “hints” they frequently offer. To explain to the rest of you, the app is constantly offering little bits of documentation of the lives of the people on your tree. It might be something highly informative, such as an obituary (the “survived by” part is very helpful in establishing relationships) or a death certificate, or a photo you didn’t have. Some are less so — a mention in a city directory, which tells you little more than that someone lived in a certain city at a certain time.

But the most fun “hints” are pages from old newspapers. I don’t know how much you’ve delved into papers from a century or more ago, but they offer fascinating glimpses into the details of life in those times and places. They accomplish this by telling you every tiny, pettifogging detail of what was going on in that community — about a group of young men who have formed a baseball team, or an odd incident in which a mentally disturbed person did something odd in public, or who attended a wedding, or simply spent the weekend with someone in town.

As a newspaperman, I try to imagine what that was like. These smaller papers (such as, say, The News of Frederick, Md., which inspired this post) likely had tiny newsrooms. An editor, and maybe a cub reporter or two to help. But these people people did yeoman’s work in recording what was happening around them. And everything went into the paper. A single inside page of one of these papers will keep you engaged for quite a while. There is an ocean of type on a single page, sometimes more than you’d find in an entire edition of a modern paper. I get the sense that these people sat there writing these things all day and all night, like a benzedrine-fueled Jack Kerouac typing on a roll of butcher paper.

And one thing Ancestry does not do is tell you where on that page your ancestor appears. So you have to hunt. Which is fun.

Today, I was offered two such hints about my great-grandfather, Alfred Crittenton Warthen of Kensington, Md. This is great, because I know so little about him. He died when my Dad was 8 years old, and he remembers almost nothing about his grandfather.

On the first page, I found him right away, because it contained his obituary, so he was in the headline. This was in 1937, and obviously something of value for the tree.

With the second, he was mentioned in the last line of a tiny item about work he was doing to remodel several rooms in the Montgomery County courthouse in Rockville. He charged $2,700. This was literally the last item I read on the page, of course. I had supposed I would find him among the guests at the wedding of Miss Amy Magdelene Derr, who married the Reverend Elmer F. Rice. Or perhaps he’d be in the “PURELY PERSONAL” column, under the subhed “Pleasant Paragraphs About Those Who Come and Go.”

But while searching, I got to reading about John W. Munday, by his own account a recent resident of an asylum in Pennsylvania, who “created a sensation” by driving into town “with $5 and $10 bills twisted in and around his ears and in his hair.” The floor of his buggy “was carpeted with greenbacks.” He was arrested on the charge of “being disorderly in the public square.” Fortunately, we are informed, “The county physician will inquire into his mental condition.”

But I was especially struck by the item immediately below that one. Here it is: 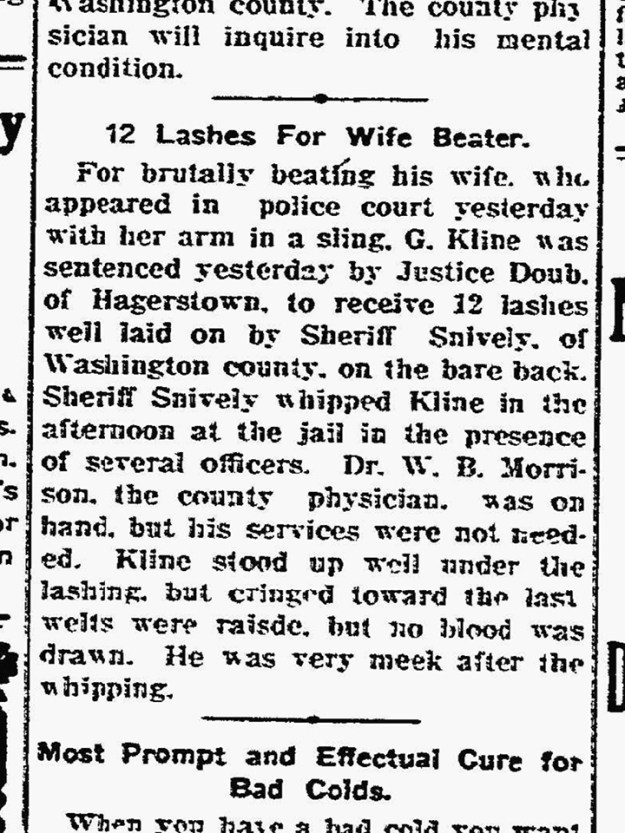 First, did you know that that was a punishment being legally meted out in 1913? I did not. And while I’m not necessarily advocating its return, it’s hard to imagine a more appropriate punishment for such a crime. It certainly fits this outrage better than, say, drunkenness aboard one of Jack Aubrey’s ships. And it seems to have worked, at least for the moment. As we see, he was “very meek” after the whipping. Although a Royal Navy bosun’s mate from Aubrey’s day might have questioned whether the lashes were truly “well laid on,” since “no blood was drawn.”

Turning to a lighter matter, there was a lengthy story about the fact that regular Tuesday and Friday night dances were to “commence in earnest” at the Braddock Heights pavilion. These events were apparently organized or sponsored by “the railroad,” although which railroad is not specified. I suppose everyone knew, and that this was somehow a normally thing for railroads to do back in that day.

But the best part was that most of the story was dedicated to the scandalous goings-on among some young people at such events, and how the manager appointed by the railroad would try to keep a lid on it. An excerpt: 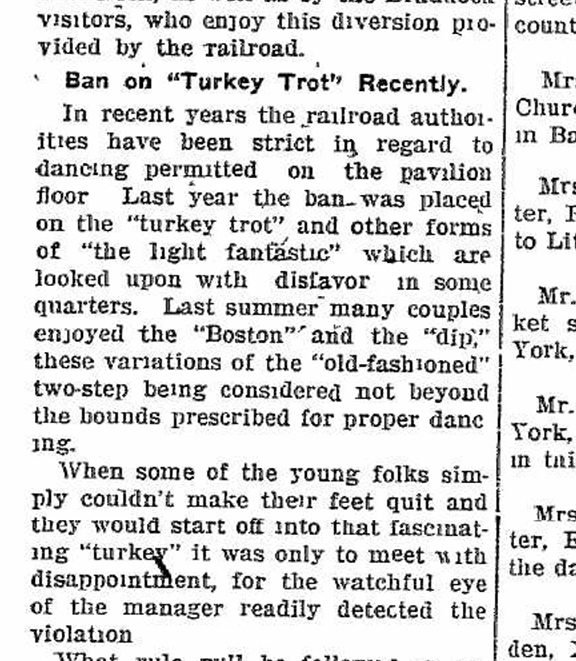 Those wacky kids. They just don’t seem to realize what a watchful eye the manager has.