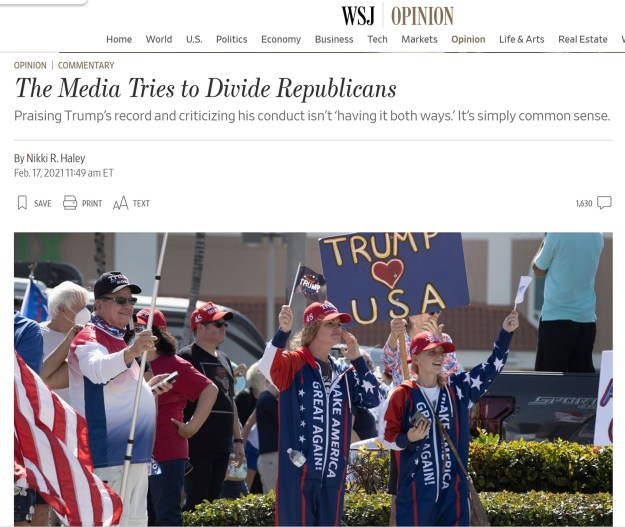 I was attracted to reading this by the grammatical error in the headline: “The Media Tries to Divide Republicans.” My plan was to mock it on Twitter. 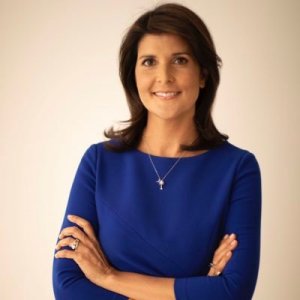 Of course, it should have said, “the media try,” what with “media” being the plural of “medium.” Duh.

The author continued the error in the piece, with maddening frequency: “But the liberal media doesn’t care about that. It wants to stoke a nonstop Republican civil war… If the media gets its way…” Ow, my head…

Yeah, I know some editors, even at some leading newspapers, have given up on using that word correctly. They’ve just gone along with the stupid, rather than correcting such things. (Sort of the way the Republican Party went along with Trumpism — and the Tea Party and Freedom Caucus. They found it easier.) But the problem may also be related to the fact that, as I found upon calling it up, this piece was written by our own Nikki Haley. Knowing Nikki, I sort of doubt that Latin was her favorite subject in school.

Here’s the lede of the piece:

Where does the Republican Party go from here? The party that abolished slavery, won the right to vote for women, and beat Soviet communism must continue to be strong and principled to move America forward…

Yeah, the GOP was at its founding the anti-slavery party, and for about a generation there all the “woke” people were in that party — Thaddeus Stevens and the rest.

Was enfranchising women a Republican issue? Maybe. (The Fact Checker gave that claim a Geppetto Checkmark!) Not really my period. I should study it more. I do know Republican women like to say that, while you don’t hear it much from the men. I’ll let you figure out why. (Nikki dwells in that little-visited part of the political spectrum where the GOP intersects with the left’s Identity Politics.)

But “beat Soviet communism?” Say what? I was here at the time, and I seem to recall Democrats very much being a part of the liberal consensus that opposed that system most vigorously. Yeah, they got a little ambivalent about that commitment over Vietnam — seeing how our involvement there arose from the zeal of Democrats to contain Leninism. But to so casually wave away the roles of Truman, Kennedy and Johnson in standing up to the Kremlin seems a bit much.

But Nikki tends to grab things on the superficial level, and she grew up in a party in which “Reagan won the Cold War, all by himself” is something not to be questioned. And Nikki doesn’t really go looking for things to question, anyway.

I wanted to stop there, but since I’m posting about the piece, I went ahead and read the rest.

People feel strongly about Mr. Trump, but we can acknowledge reality. People on the left, if they’re honest, can find Trump accomplishments they like—a coronavirus vaccine in record time, Middle East peace, more accountability from China…..

Did you know we had accomplished Middle East peace? Wow! I didn’t. Did anyone tell the Israelis, or the Palestinians? Is that a fully accepted fact in Gaza? And what’s this bit about “accountability from China?” Does she mean those capricious tariffs? And didn’t Trump do an awesome job on coronavirus? Oh, boy…

But let’s give Nikki some props. The piece has good bits:

If we can’t make judgments beyond whether someone is Republican or Democrat, then America can’t face its biggest challenges. We separate into two camps that always hate each other. We become estranged from family and friends over politics….

But then she goes back to the nonsense: “Mr. Trump’s legal team failed to prove mass election fraud in court. But election security is still urgently needed.” Really? WHY? What, precisely, is the problem you’re trying to address, beyond voters choosing Democrats? I refer you to the first part of your sentence: Do you have access to evidence Rudy couldn’t find?

Then there’s, “I will gladly defend the bulk of the Trump record and his determination to shake up the corrupt status quo in Washington.” WHAT?!? The guy who openly used his position to advance the fortunes of his businesses, and who kept appointing and elevating and praising and pardoning people who had NO notion of ethics at all? The guy who arrived in the “swamp” and spent four years making it deeper and slimier and adding more alligators? THAT fighter of corruption?

I’ve quoted liberally — someone explain what that word means before Nikki faints — because of the WSJ paywall. But here’s the point, boiled down: Nikki is desperately trying to be the candidate of people who want to see the GOP face up to the horrific mess that was Trump. (Right after that last quote above, she says “I will never defend the indefensible.”)

But she wants to do it while keeping support of the people who will defend the indefensible forever, as long as it was committed by you-know-who. She thinks she’s found a secret formula that will make everybody support her. She thinks she’s being frightfully clever.

This is going to make her sound like she’s babbling nonsense. Because she is. Expect her to continue to do so, as she pursues an absurd ambition…

8 thoughts on “Nikki’s strange perspective on history, and everything else”