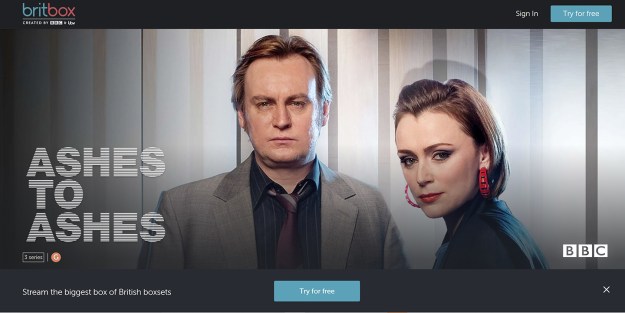 There’s Gene Hunt! I don’t know who the woman is, though…

What a fascinating modern age we live in.

Now, you can get almost music, movie or TV you want and experience it in seconds.

Except when you can’t.

And the times when you can’t sort of drive you nuts. Or they do me.

I mentioned one of the services I subscribe to, BritBox, in a comment on a previous post. One of the main reasons I signed up for for BritBox — which is only five or six bucks a month — was so I could watch the whole two seasons of “Life on Mars” again. Which, in the months since I signed up, I’ve already done twice. It’s also handy to have because my wife and I both enjoy British cop shows, like “Scott & Bailey” (which we’ve actually been watching on Prime, but never mind) and comedies like “Upstart Crow.”

Anyway, at some point in recent years I heard about the sequel series to “Life on Mars,” which was called “Ashes to Ashes.” Nothing I ever read about it made me want to see it very much — the plot sounds contrived in a particularly convoluted way. But then, if I’d read a description of “Life on Mars” before seeing it, I might not have known I’d enjoy it, either.

Anyway, “Ashes” has some key characters from “Mars,” such as Philip Glenister as Gene Hunt, Dean Andrews as Ray Carling, and Marshall Lancaster as Chris Skelton. It didn’t have the star from “Mars,” John Simm, but that’s fine. I’m more concerned that it doesn’t seem to have Liz White as Annie Cartwright. Her I miss.

But I’ve wanted to see it anyway, so periodically I go Googling for it. And the other day, I thought I’d hit the jackpot! Check it out: There it is, on BritBox! Sure, I’d searched for it there before without success, but there it was…

So I immediately went to the tube here in my home office, called up BritBox on the Roku, and… there it wasn’t. Every way I tried searching for it after logging into my account, on the Roku or my phone or my laptop — no, it does not come up.

Of course, I didn’t want to click on the “Try for free” button on that page, because they’d want me to create an account and I already had one. And for some reason, when I tried to “sign in” on that page, I couldn’t get in. I had to come in some other way (I forget how, but it probably involved opening a different tab).

I don’t understand it. If it used to be on BritBox, but isn’t any more, why does this page still come up?

You wouldn’t think so. But I had a huge surprise when I was in Thailand. We were in Kanchanaburi, the home of the real-life bridge on the River Kwai, and I wanted to show my daughter the movie on Netflix, and… you couldn’t watch Netflix in Thailand. Yeah, I understand they have such oppressive barriers in Red China, but Thailand? Turns out Netflix wasn’t available just everywhere you have internet. (Although I think Thailand has it now.) 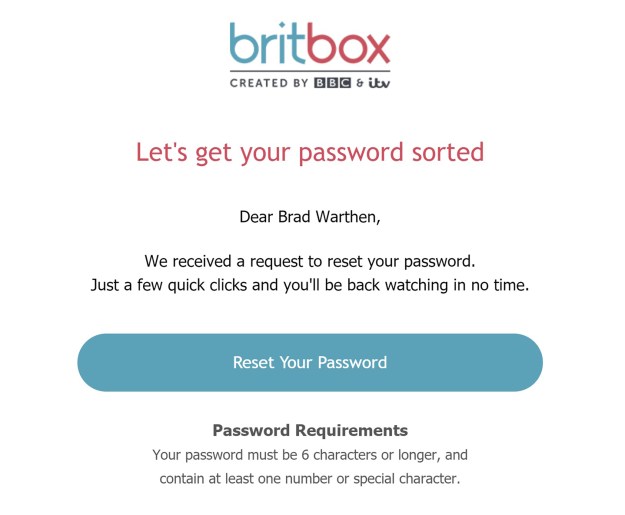 They got me sorted good and proper, but I still can’t see the show…