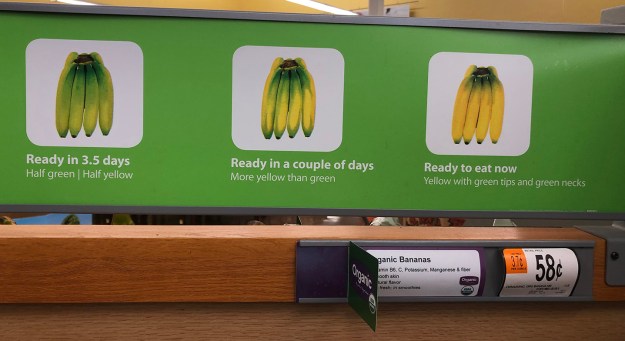 Yeah, that headline is a reference to a Woody Allen movie. (I’d link to a gif of the actual line, but I can’t find it. Here’s a poster.) It seemed to fit, although I can’t swear it’s appropriate. I haven’t made up my mind yet on the whole, If the person is scandalous, must the person’s works be avoided like the plague thing. Maybe they must. I don’t know. Maybe we can have a side debate about that.

But here’s the point of the post: I took the above and below images in the produce department at Walmart a couple of months back, and just ran across them again.

None of the bananas in the images are anywhere near “ready to eat now.” Look at the ones they say that about. See all that green near the stem. You can’t even peel them without either using a knife or unnecessarily crushing the fruit beneath. They’re just not ready.

They will continue to contain a certain chemical (I don’t know what that chemical is, but it tastes wretched) that makes them taste “green” and makes them hard to digest for several days, maybe even a week. Wait not only until they are no longer green, but until you get some small black flecks on the yellow. Then, they will be fine — still fresh and firm, and sweet, and without that chemical taste that is every bit as offensive as, I don’t know, artificial sweetener.

I’ve known this for most of my life — certainly ever since I lived in Ecuador as a kid, and pushcarts came around my neighborhood selling a wide variety of bananas — verdes, marduros, guineos, and such. Actually, I may be remembering or spelling some of those wrong. It’s been a long time. More than 50 years later, things get fuzzy. So it was kind of a relief to visit Thailand several years ago, and see fresh fruit regularly brought to the table, and never, ever was there a banana with a hint of green on it. Because in the tropics, people know bananas.

But a lot of people don’t know these things, I find. And weirdly, some people — some even in my own family — actually like those green things. I can’t explain it.

Here’s a theory, though: You know how some people inherit a trait that makes them hate the taste of cilantro, while the rest of us find it completely unobjectionable?

Maybe it’s like that. Maybe the people who don’t want to retch at the taste, the unnatural smell of green bananas are just genetically different. Maybe they don’t taste that horrible chemical, whatever it is. So they don’t back away in revulsion from a banana that makes a crisp “snap” sound when you slice it (as though it were celery or something), the way the rest of us do. They are clearly wrong, but perhaps it isn’t their fault.

What do you think? Does my explanation work? (By the way, I tried Googling this, but didn’t find an adequate explanation.) 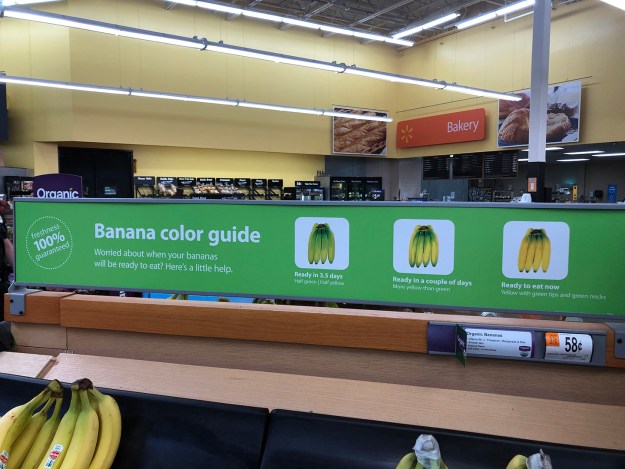