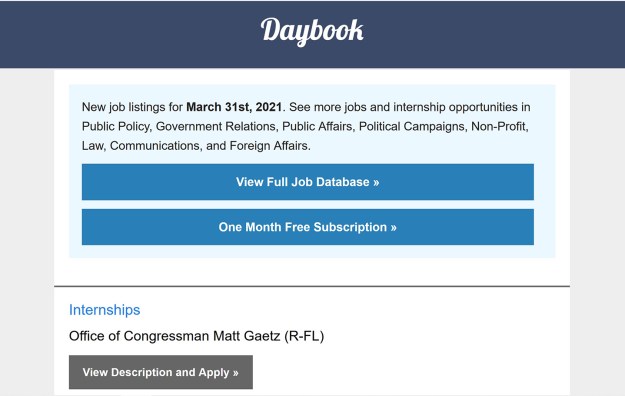 You know that Daybook outfit that advertises political/government jobs? It’s a mailing list I suppose I got on as a result of working for James. Anyway, I occasionally see an interesting opportunity and share it with you.

Check out the top one on today’s email.

This blog is all about public service, so here’s some additional info for any bright, ambitious young person considering this position:

What we know: Rep. Matt Gaetz is under federal investigation, accused of having sex with a minor

WASHINGTON – Rep. Matt Gaetz, a firebrand Florida Republican and close ally of former President Donald Trump, is under investigation over allegations that he had sex with an underage girl, according to media reports Tuesday.

The revelation that the Justice Department is investigating Gaetz for potential violations of sex trafficking laws swiftly roiled national politics. Gaetz was accused of having a sexual relationship with a 17-year-old girl and paying for her travel, The New York Times first reported.

The third-term congressman denied wrongdoing,  insinuating that he and his family have been under the threat of extortion from a former Justice official….

If you want more, just Google his name. This is pretty much what you’ll find.

Want even more? Here’s what the posting of the position says about the duties:

In the District office, interns may be asked to do a variety of things, including day-to-day office work such as answering phones, writing letters and assisting with media clips. In addition, interns may be assigned to assist in various constituent case work or work on District-based projects of importance.

If you go for an interview, make a point of asking what else “a variety of things” might include, and whether it involves interstate travel…