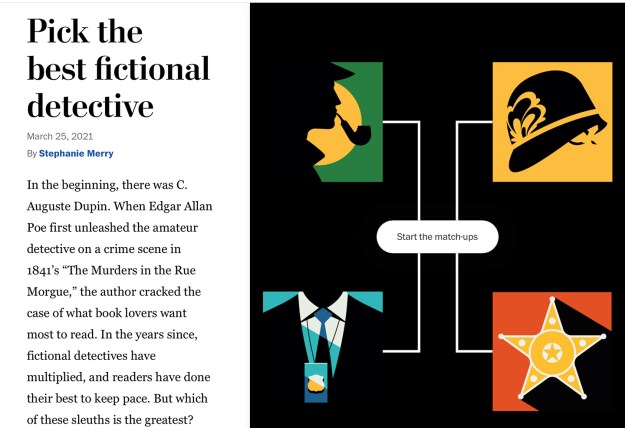 – “Who is your favourite person from history?”
– “Sherlock Holmes.”
– “Well, he’s fictional.”
– “Whoa! I think you’d better check your facts there. Fictional? Who took care of the business with the giant dog that was eating everybody? It wasn’t Watson. Don’t tell me, I suppose he was fictional too? Maybe there was no giant dog….”

I was kind of excited, initially, about the interactive feature I found Sunday on my Washington Post app.

The headline was “Pick the best fictional detective,” and it was presented in an interactive graphic meant to evoke the NCAA tournament “brackets” the everyone (even I, despite my lack of enthusiasm for sports) filled out mere days ago.

So, you know, if you enjoy both mysteries and sports, it was extra fun. A cool idea.

But this is no proper way to figure out even who you, yourself, think are the best detectives, much less who the best actually are. (For instance, say two of your five best detectives face each other in the first round — that means one of your top five gumshoes won’t even make the top 32, assuming you’re starting with 64. That’s not right. No way it’s right. It’s a false system of selection. With basketball, it works. Not with detectives.) Another problem is that too few of my fave detectives were even on the bracket in the first round.

The only professional, scientific way to determine the top dicks is to draft an actual Top Five list, and then argue about it with everybody. Stands to reason. The immemorial custom of the blog, and so forth…

Coming up, I was never a big fan of mysteries. I wasn’t an Agatha Christie enthusiast. Nor was I into Conan Doyle, even though I always enjoyed the Basil Rathbone movies. I just wasn’t that much of an admirer of formulaic fiction. Just as I’m not big into blues, or reggae. To me, the songs just sound too much alike. One is fine, but not a whole album. I mean, you know, a blues progression is a blues progression.

Even with Edgar Allen Poe — I preferred the horror stories to “The Purloined Letter.” I got into Poe when I was about 10, and we 5th-graders shared the stories to chill each other’s blood. And “she was buried alive!” does that way better than “the letter was in plain sight!”

But then, things happened. I started reading books that broke the mold, such as Martin Cruz Smith’s wonderfully original thriller Gorky Park and Len Deighton’s alternative history novel SS-GB. And you know what a le Carre fan I am. Well, his first books about George Smiley cast him as a Christiesque amateur solver of mysteries.

And then, along came streaming, and my wife and I got hooked on a range of British murder mysteries and police procedurals. And entirely new forms, such as Nordic noir, and, believe it or not, Welsh noir.

Anyway, here’s the list. I’m sure I’m leaving out somebody awesome, but let’s get the party started:

HONORABLE MENTION (or, to be honest, the next five, because I couldn’t stop)

Yeah, I know — all white guys, except for one lady-type person, and Bunk, who I know you’re already suspecting I snuck in for diversity’s sake. (But I didn’t. Bunk’s awesome.) Yeah, well…. I just couldn’t get into “Luther,” as great as Idris Elba is. Speaking of Bunk and Elba — the thing about “The Wire” is that the best characters were not the cops. In fact, by far the best character in the show was an armed robber. And Omar was not only black, but gay, if you’re keeping score. Unfortunately, this is a detectives list.

And I considered a bunch of women, and almost put Marcella on the list. She’s fascinating. But man, that series really took Nordic noir (although it was set in England) to some weird places, and we got to where we couldn’t watch anymore. And while I’m somewhat intrigued by Chloé Saint-Laurent on the French cop series “Profilage,” she’s technically not a detective, and I’ve only seen her in two episodes so far, so I don’t yet know how good she is.

And no, Jackie Brown, about whom I thought for a second, wasn’t a detective. If I were doing a Top Five Flight Attendants List, she’d be a great candidate. Along with Elaine Dickinson…

Oh, but wait! Back to “The Wire”… “Beadie” Russell was awesome! And she sorta became a detective during the course of the series, right? There are just too many fictional detectives out there for me to know where to stop. If I did this again next week, my Top Five might be five completely different people…