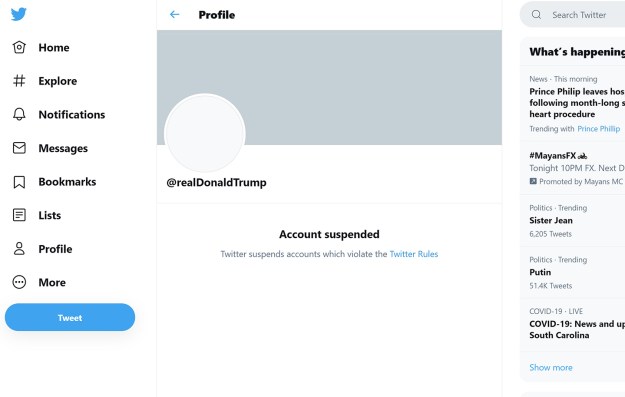 Of course that should say “accounts THAT violate,” not “accounts which violate.” But whatever…

I just mentioned in a comment on a previous post that I had meant to ask that question in a separate post back when it happened.

And then I was all like duh, you just wrote it out, so why not make it a post now?

Ever since he was banned from Twitter (and those other platforms), I’ve been meaning to write a post asking whether y’all think that’s a good thing or a bad thing.

Sure, much trouble is averted by cutting him off from that outlet.

But it makes it harder to keep tabs on him. When he communicates in a more subterranean manner with his minions, we can’t see it.

But one thing about it is easy: It’s idiotic to say his “First Amendment rights” have been violated. He can write any stupid thing he cares to. Jack Dorsey is in NO way constitutionally mandated to give him a free place to publish it…

10 thoughts on “Trump getting banned from Twitter: Good thing or bad?”