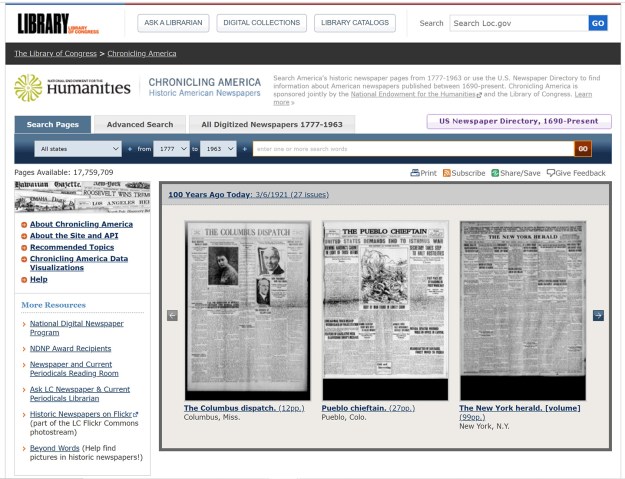 I want to thank Jim Catoe for pointing out something very cool the other day.

Remember my post about how fascinating newspapers were a century or so ago, with their unbelievably detailed and varied accounts of what was going on in their communities? Occasionally, Ancestry throws me “hints” that consists of pages from such papers, and I usually enjoy reading the rest of the page as much as I do the item that contains information about an ancestor. (It’s the same with other aspects of tree-building: It’s fun to find an Earl of Whatever as direct ancestor in the 15th century, but not nearly as much fun as checking out his Wikipedia page and learning the historical context of what was going on around him. I’ve learned a lot about history that was unknown to me before. But not enough. Gotta keep at it…)

Well, Jim posted this in response:

Chronicling America: Historic American Newspapers, housed in the Library of Congress and available on-line, has been a valuable tool for me in researching my ancestors in Lancaster and Kershaw Counties. I’ve found both saints and scoundrels in the family’s past.

So I checked it out, approaching it as a genealogical tool, and immediately did a search for “Warthen.” But unusual as my last name is, that was a bit too wide a cast, so I narrowed it by adding the first name of my grandfather and uncle, “Gerald.”

And immediately, I ran across a page of The Sunday Star of Washington, dated Feb. 28, 1943.

And on it was one of the most fascinating clips I’ve seen, in family tree terms. Of course, the item about the Warthens wasn’t the dominant thing on the page. The visual focus was a photo from a social event, with this cutline:

SINCERE SMILES AND WARM HANDCLASP OF ALLIED FRIENDSHIP
A high light of the reception given last week at the Soviet Embassy was the warm welcome extended by the Ambassador and Mme. Litvinoff to His Britannic Majesty’s Ambassador and Lady Halifax. The function was given in celebration of the 25th anniversary of the valiant Red Army.

Many other interesting artifacts of life in 1943 were to be found on the page. But unlike with the pages from Ancestry, I was able to go immediately to the one I was looking for, because “Gerald” and “Warthen” were highlighted. And here, in the middle of an item about what various folks in the Maryland suburbs were up to, was this graf:

Mr. and Mrs. Gerald H. Warthen have leased their home in Kensington, where they resided for many years, and members of the family are now in various parts of the country doing their part in the war effort. Mr. Warthen is with the Federal Public Works Agency in Baltimore and Mrs. Warthen and three of their children. Miss Mary Bradley Warthen, Donald and Rebecca Jane are in Asheville, N. C., where Mrs. Warthen and Mary are with a branch of the General Accounting Office, which was recently transferred there. Another daughter, the former Miss Laura Moffatt Warthen, whose marriage to Lt. John B. Avery, Army Air Forces, took place February 13 at Rosswell, N. Mex., is now in San Antonio, Tex., where Lt. Avery is stationed. The Warthens’ older son, Lt. Gerald Warthen is with an Army engineer aviation battalion near Tampa, Fla. After the war they plan to be together again at their Kensington home.

It’s not all that well-written. It seems to say Grandma and three of the kids were in Baltimore with my grandfather, and then the next sentence notes that she was working for the GAO in Asheville, with the three youngest kids. And the latter was true, to the best of my knowledge.

But still: How often do you find an item like this, from almost 80 years ago, telling you what everyone in your father’s family was up to at this moment of great, historic import? Not often.

I knew most of this, just as I know my grandfather would join them in Asheville later, that Uncle Jack would go off to fly B-17s in the 8th Air Force and get shot down three times, and that my Uncle Gerald would be with the engineers in the Philippines (where he would later joke that he was building an officers’ club or something equally nonessential when MacArthur finally returned).

It doesn’t say much about what Dad and the other young ones were doing, because he was still a schoolboy — the Japanese had attacked Pearl Harbor on his 13th birthday. And as I say, there were no great revelations in the paragraph. But still, what a cool find!

And that was just from my very first search. I look forward to exploring further.

Maybe I’m just discovering something all of y’all knew about. But if not, I urge you to check it out, especially if you have the genealogy bug. Here’s the link. And thanks, Jim! 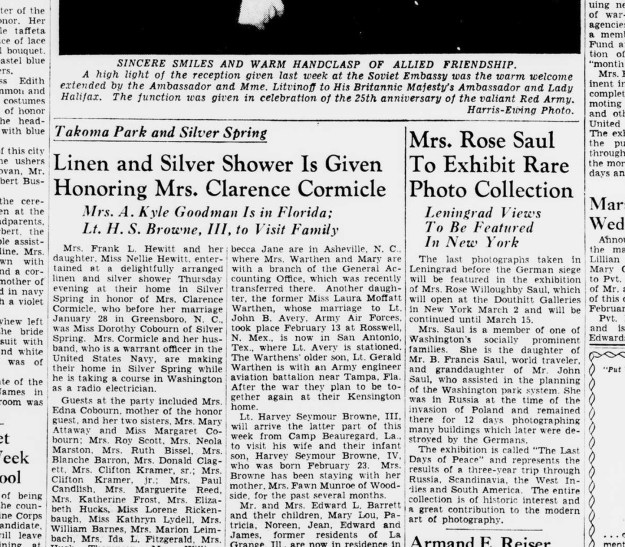 2 thoughts on “What a great resource for searching old papers!”