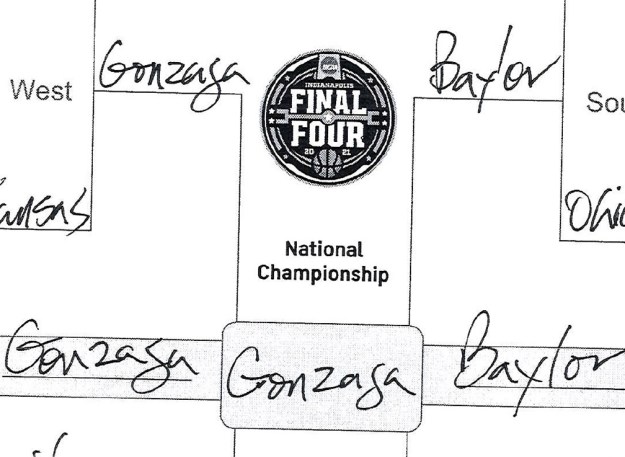 I just looked at my NCAA bracket for the first time since I filled it out, to see how I was doing.

It had been an afterthought, and I had no money riding on it, so who cared, right? I did it too late to get into any pool. The first games were underway (although I had no idea what the scores were yet), so I just sort of did it for my own minor entertainment. My daughter had done one and urged me to, so I thought, Why not?

Then I forgot where I had put it. It took a few minutes to find it just now. And I saw that WOW, I was doing pretty great! I had Gonzaga and Baylor in the final — which seems a pretty likely event at this point — and Gonzaga winning. Which also seems, right now, to be the likeliest outcome, although anything can happen.

I felt smart, in a “proper man,” sort of way, as Roy and Moss were trying to feel when they went about saying, “Did you see that ludicrous display last night?”

Almost as smart as that time back in the 80s — no, wait; it must have been ’91 — when Charlie Pope persuaded me to fill out a bracket, because he wanted my dollar. I’m not saying Charlie was in charge of this unsavory gambling enterprise; I forget which of the Five Families was running it. But he was the guy bugging me. I kept refusing, saying (truthfully) that I knew zip about college basketball. I had sort of followed it back in college (when my alma mater came in second in the NCAA, behind UCLA), but not since.

But finally, to make him stop bothering me, I filled out a bracket and kicked in a buck. I had no idea what I was doing. I didn’t even know those little numbers next to the teams were telling me where they were seeded. But I had to have some kind of basis for a decision, so, in the minute or so I took to fill it out, I gave the advantage to whichever team possessed one or more of the following characteristics:

That was my system. I picked Duke to win. Some sports fans smiled indulgently at me for that.

And I won. This was a very frustrating outcome for poor Charlie. I knew he reviewed the brackets every day to see how each person was doing, and I made a point of asking him how I was doing every day, and enjoyed his grouchy “You’re still in the lead.” This was a completely unjust outcome in his book, since he knew that I was an idiot in these matters.

I guess I won between 20 and 30 bucks. But that wasn’t the point — I was just so glad to be right. My system had worked!

And now I’ve got a good chance of being sort of right again.

Just don’t, you know, ask me who else I had in the Final Four. I think one of them was knocked out in the first round, which is one reason I hadn’t looked back at the bracket since then… 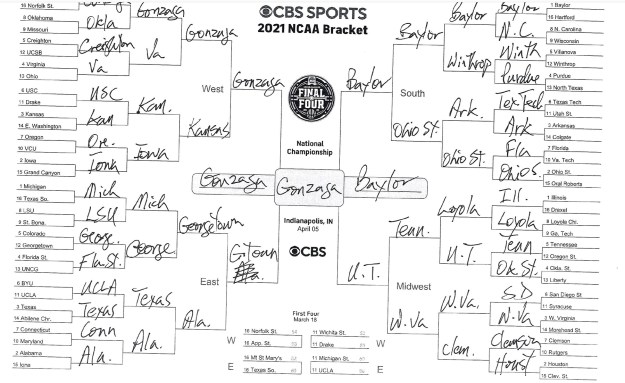 Pay no attention to my FULL bracket, or to the man behind the curtain!

4 thoughts on “I am a basketball PROGNOSTICATOR! Sort of…”