Brad Warthen is an ex-newspaperman, turned latter-day Mad Man. Which is interesting, at least to him.

For nearly a year after being laid off by The State, until recently South Carolina’s largest newspaper (those little slogans still fall trippingly from the fingers), he 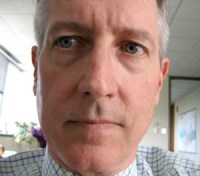 was “consulting.” Now he has an actual jobby-job, as director of communications/public relations for ADCO, a full-service advertising and marketing agency in Columbia.

He was the Vice President/Editorial page editor at The State, where he had worked for 22 years, the last 12 as EPE. (You can still find some of his columns on the paper’s website, or at least you could last time we looked.) Before that he spent a decade at The Jackson (TN) Sun, and a couple of years at the Wichita paper. He started as a copy boy at The Commercial Appeal in 1974, and would probably still run fetch you some coffee if, in an unguarded moment, he heard you yell “Copy!” in just the right way.

He started blogging in 2005, and was immediately addicted.

If he could figure a way to make a living from this blog, he would. But so far, no one has offered many bucks for it. He has started taking ads recently, which he also finds interesting, if not terribly enriching thus far.

He despises all political parties that actually exist, although he has proposed the creation of several parties of his own — the UnParty and the Energy Party most prominent among them. He is neither a liberal nor a conservative in the ways they are popularly defined these days. He is definitely not a libertarian; he leans toward communitarianism, but does not consent to being pinned down.

That not specific enough for you? Well, it’s complicated. Tell you what — folks often use an opinion writer’s views on a presidential election as a guidepost to where he stands overall. So go back and read his sort-of profiles about Barack Obama and John McCain from last fall. Maybe those will help. If you want more in that vein, look at the reams of copy he wrote back in January 2008, when the S.C. primaries occurred. But make sure you have some free time on your hands first, because he does go on and on.

He encourages all points of view on the blog, as long as they are presented in a civil manner. He is the judge of what will be civil, and will throw you out in a skinny minute if you violate his standard. Regulars know where the line is; if you don’t, go read this. Or this.

He is a member of St. Peter’s Catholic Church in Columbia. He and his wife of 37 years have five children and five grandchildren. They are infinitely more important to him than all that stuff mentioned in the previous grafs.

One thought on “About”