I’ve noticed something lately, and I wonder whether it’s a function of aging.

I don’t don’t obsess about it or anything. I don’t focus anxiously on it like Catch-22‘s Yossarian, of whom Heller writes:

He wondered often how he would ever recognize the first chill, flush, twinge, ache, belch, sneeze, stain, lethargy, vocal slip, loss of balance or lapse of memory that would signal the inevitable beginning of the inevitable end….

But it does occur to me, when I have trouble remembering things I once knew (say, all the lyrics of every Beatle song) or retaining new information. I wonder, Is this normal, or is this… decline?

For instance, in recent days I’ve found myself looking up the following, to make sure I’m understanding what is meant by the writer using them. And I’ve been very conscious of having looked up all of them before, perhaps multiple times. But the definitions don’t stick:

epistemology — This one is important, and it gets used a lot lately because Trump and Trumpism challenge the very basis of knowledge, of what a fact is, of what is knowable. But I keep having to go, Wait, let me look that up again. And unfortunately, it’s sufficiently slippery that you can’t hold onto it the way you can, say, an apple. The short answer is that “Epistemology is the study of the nature of knowledge, justification, and the rationality of belief.” But that means it can be used all sorts of ways. Every time I run into this one, I picture myself as Kenneth Parcell on “30 Rock,” with a particularly bewildered look on his simple face.

neoliberalism — This is a stupid word. It’s nothing like “neoconservative,” which describes something clear, something of which examples abound: generally speaking, a liberal who turned away from the Democratic Party and other liberals post-Vietnam. But Wikipedia defines it this way: “Neoliberalism or neo-liberalism is the 20th-century resurgence of 19th-century ideas associated with laissez-faire economic liberalism and free market capitalism, which constituted a paradigm shift away from the post-war Keynesian consensus that had lasted from 1945 to 1980.” So… it’s classical liberalism, right? Oh, sure, pedants draw a distinction, but the distinctions are stupid. A neoliberal is someone saying, “Gimme that old-time liberalism.” The “neo” is a superfluous affectation. No wonder I can’t remember it. It lacks meaning.

tautology — This one’s actually easier to understand than the others. It’s kind of like, you know, pleonasm. Yeah, I know. I’m going to go ahead and forget “pleonasm” on purpose…

Maybe I should stop reading Ross Douthat. I’m pretty sure he’s used all of those words recently, sending me to Google them again. The showoff.

But it’s not just polysyllabic Latin- or Greek-derived words in English. I see the slippage in other areas as well.

For instance, I’ve had a lot of trouble relearning Spanish. I spoke it fluently as a child. The other day I happened to remember my landlady in Ecuador telling me how I sounded like a native after I’d been in country three months. She was being nice, of course, but I did pick it up ridiculously easily — helped by the fact that I was only 9 years old. My vocabulary probably wasn’t great at the point, but my pronunciation was already good, learned entirely from imitating the non-English-speakers who surrounded me all day, every day.

I especially have trouble remembering the gender of nouns (especially those that don’t end in “a” or “o,” and even those — such as mano — can fool you). Whenever I serve as a Eucharistic minister at the Spanish Mass at church, part of my duty is to help clean up the vessels afterward. Then we lock up everything. And on several occasions, I’ve wanted to ask, “Where is the key?” And I start to say it, and can’t remember: Is it “la llave” or “el llave?”

Most people whose Spanish is as bad as mine now is wouldn’t worry. They’d just say one or the other in the confidence that the native speakers would understand anyway, and be forgiving toward the gringo. Which they would, on both counts. I’m not satisfied with that. I want to get it right, or not say it at all. So I ask in English, rather than expose my failing.

Llave is feminine, by the way, as I found from looking it up yet again… 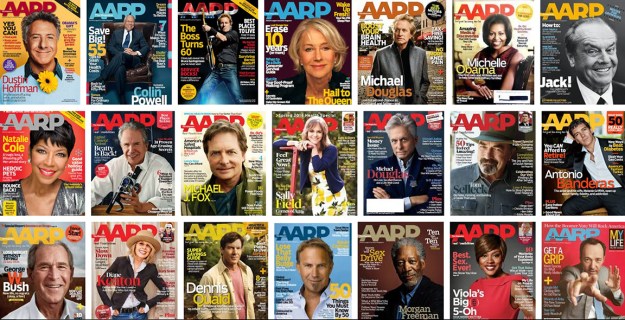 Harry Harris brought up AARP, which reminded me of something I noticed on the way out the door this morning.

All of a sudden, all truly famous celebrities, all the big names, are over 50.

That hit me when I noticed the latest AARP magazine on our kitchen table, with Steve Martin on the cover. Of course, we all knew Steve Martin was old — he was white-headed when all the world was young.

But the more I’m exposed to this magazine — I never pick it up, but I do notice the covers — the more I’m convinced that everyone famous is now older than 50.

Look at the recent covers above and below.

Sure, there are some recognizable celebrities who are under 50. There’s um, Taylor Swift! And that little Bruno Mars guy. And maybe one or two others. Dave Matthews? Nope — he’s 50. All those superhero actors named “Chris” don’t count, by the way. A celebrity needs to stand out distinctively.

When I was young, not even the OLD stars my parents liked were over 50. Take 1965, which I have written about in the past as the most fevered time American popular culture (it was for me because I had just returned from years in South America without TV, and soaking up pop culture was like overdosing on a powerful drug — but I don’t think it was just me).

Dean Martin was 48. Frank Sinatra didn’t turn 50 until the end of that year, and he seemed ancient! Kirk Douglas, father of the now 72-year-old Michael, was only 49. James Garner, who was born looking like somebody’s dad, was 37. Nat King Cole, who died that year and whose daughter now graces the cover of AARP, was only 45.

While all the celebs we kids were interested in were in their 20s, if not teens.

Anyway, that’s the way I remember it. Your mileage may, you know…