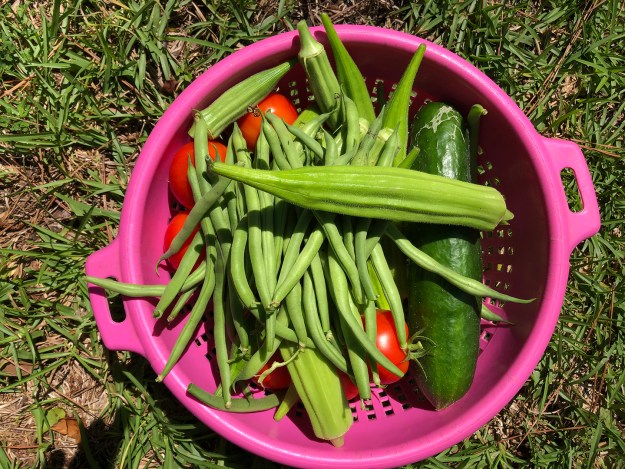 Just got back from a few days at the beach, and our little garden of raised beds had gone a little nuts in our absence — especially, I think you’ll note from the picture above, the okra.

Yeah, those will be too big to eat. But they’re impressive, aren’t they?

Remember my okra patch? I last wrote about it at the end of March, when I had just busted up the clay under the box — by hand, being the dedicated farmer I am.

Shortly after that, I had a stroke, and my wife finished filling the box with soil and actually planting the okra. (I think that was the excuse I used for neglecting the job. In any case, it worked.) Actually, planting the little plants that my son had given us, grown from seeds he had saved from past years.

Then, our pleasures combined, as the rabbits started eating my okra plants.

But they were polite about it. They only ate the plants nearest the shrubbery where some of them lived. Note the picture below. The okra patch is the box in the foreground on the right-hand side. See how lush the left side of the box is, and how denuded the starboard side is? That’s where the rabbits have been at work.

And not only rabbits. A couple of times, we’ve noticed only the tops of some of those plants had been eaten — plants a couple of feet or more tall.

Deer, you see. We saw a couple of their hoofprints in the soil one morning.

But, as my wife says, isn’t it nice that we’ve been able to feed the animals as well as ourselves. And as I say, “Yeah, OK, uh-huh…”

But seriously, I’m just glad everything survived while we were gone, instead of shriveling up or something.

If you have a garden, how’s it going? 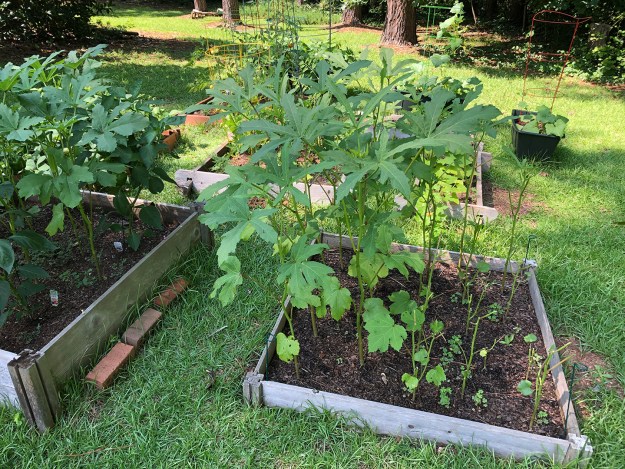