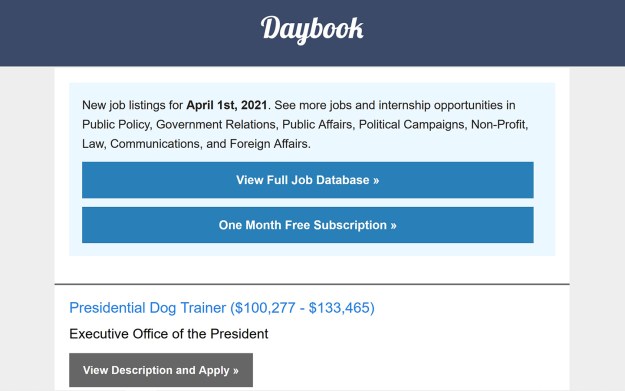 Another opportunity from Daybook. I was looking to see if the Gaetz internship was still there, and this was on top instead.

Now there’s a job I’d like to have, if I were qualified. But my record on getting dogs to do what I want them to do is… spotty.

And there are challenges. If I had that job presently, the only way I could do a positive self-evaluation would be to say, “I successfully trained Major to bite someone other than Secret Service agents.” Or maybe, “So far, thanks to my intensive training program, Major has not yet actually killed anyone.” Which leaves something to be desired, and would probably not go over terribly well with my superiors.

But I hope they find someone good. They should be able to, at that pay level…

One more thing: If you click on that job, and scroll all the way to the bottom, you find this key bit of information: 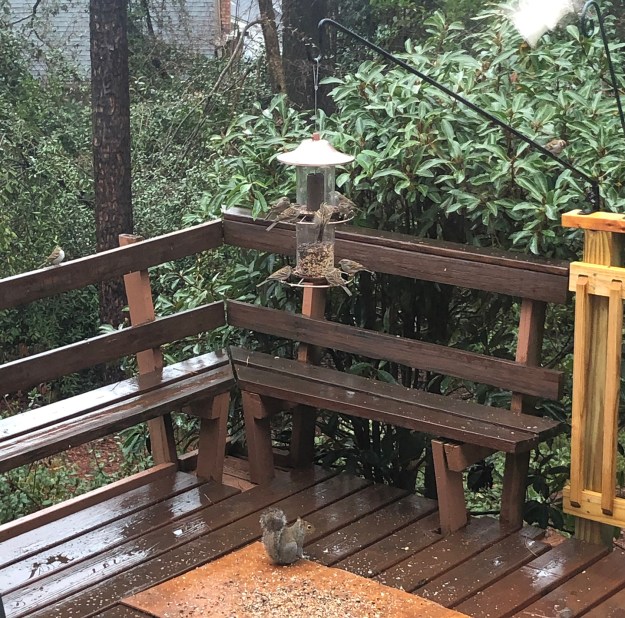 Our busy restaurant. Note the thief down at the bottom.

You’ve read or heard the news about taking in birdfeeders.

Well, we had already essentially closed our busy restaurant on the deck. We haven’t put any new seed in it for a week or so (and it runs out fast). My wife runs the establishment, and her rule is, when it starts turning warm, the birds need to fend for themselves. Get up early and get the worm, etc.

It’s been a busy season, as you can see above. Here’s a closeup of the feeder, to give you a better idea: 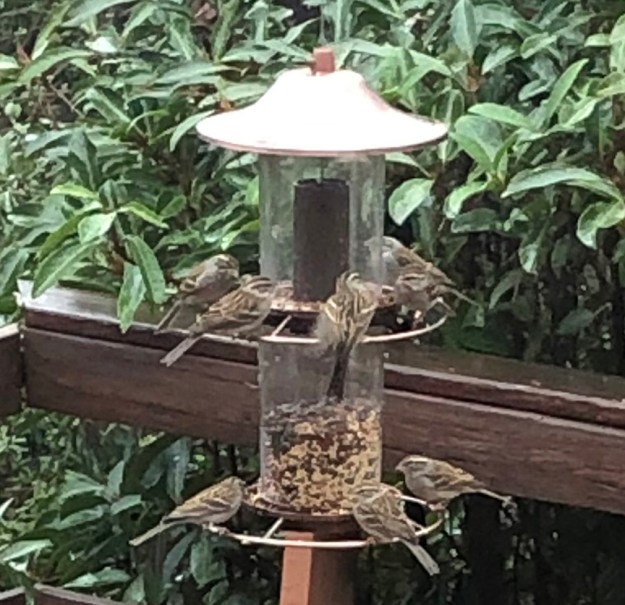 The new restaurant has twice the seating, above and below.

Business wasn’t great at the start, but not on account of COVID. Remember when we had those trees cut down? Well, the woodsmen did a great job, with one exception — a branch from that one, biggest pine in the backyard fell on the corner of our deck, smashing the railing and destroying my wife’s feeder. (Note that this was unintentionally foreshadowed here on the blog, when I wrote that “Then, they’ll get to the one we’re most concerned about, the massive one with ominous branches that project out over the deck we’ve spent so much time rebuilding…”)

So I got her another one for Christmas. But I upgraded — it was the same kind of feeder she’d had before, but two-story. Twice the seating space, above and below.

Of course, this leads to at least twice the mess below — bird poop, inevitably, and a huge amount of dropped seed. This can be avoided by swinging the feeder out from the deck, over the yard, but then we can’t see the birds as well from the kitchen window. And we like seeing them. My wife has acquired a couple of birdwatcher’s books, and she’s gotten good at identifying them all, and even I’ve learned the names of some of them — the wrens (some actual Carolina wrens, but a number of impostors as well — such as the ones pictured above, I believe), chickadees, those big bullies the cardinals, titmice, Eastern towhees, and so forth.

So my wife put out a big sheet of cardboard under the feeder, which catches most of it. And there’s enough seed there that some undiscriminating diners feast down there — including, as you see in the first photo above, the squirrels.

The squirrels. They figured prominently in my shopping decisions (the new feeder was a Christmas gift from me) for the iron rod from which the feeder hangs. I got an extra big, heavy, LONG iron bar, in an effort to keep the squirrels out of the feeder.

I failed, of course, as you can see below. They were very… enterprising. Sometimes I get the impression that we have the squirrel equivalent of SEAL Team Six living in our backyard. They have the skill, the training, and the determination to overcome any obstacle.

They had two methods. Some would take huge, suicidal leaps from the wooden benches built into the corner of the deck, several feet away. They’d just barely make it, snagging the perch with their little paws and pulling themselves up so they could dig in. What’s pictured below is the less dignified manner. It involves walking out on the new, long iron bar, holding on with their toes to the top of the feeder, and then eating while hanging upside-down.

When I see these things happening, I sometimes step out and scare them off. Other times, I figure, if they’re that determined, let them eat.

But really, the feeder is for the birds…

Have y’all had similar experiences? 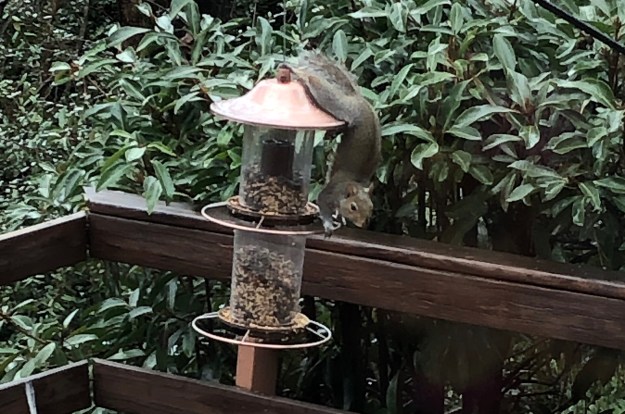 It looks ridiculous, but I guess he’s really hungry.