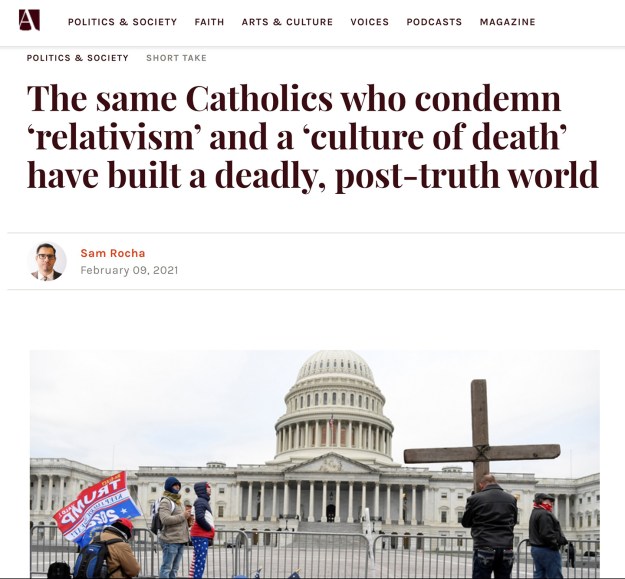 Here I am again posting about my other recent obsession (as opposed to the one about what the web is doing to our brains and society): Trying to pull back some fellow Catholics from their recent political (and theological) madness.

Reading frequently on this topic, I realized recently that I’d find a lot of good stuff (such as Jeannie Gaffigan’s great column I wrote about before) in America magazine, the Jesuit publication. So I subscribed. And yesterday they alerted me to this piece, which I thought was good.

It’s headlined, “The same Catholics who condemn ‘relativism’ and a ‘culture of death’ have built a deadly, post-truth world.”

An excerpt that sums up the point:

To speak of the “culture of death” and “dictatorship of relativism” is to invoke a recognizable formula that neatly sums up a particular sense of Catholic countercultural identity that has increasingly allied itself socially and politically with evangelical Protestants and the Republican Party. In this usage, this combined mantra has become a truism at best and a slogan at worst, even beyond its Catholic usage. Worse still, it has become a performative contradiction and scandal that makes a mockery of the Gospel.

In its final days, the Trump administration went on a killing spree, executing federal prisoners at an unprecedented rate; the number of Americans killed by Covid-19 broke 400,000; and five people died in a violent failed insurrection at the Capitol. Add to this the ongoing refugee crisis, the existential threats of climate change, the rise of populist authoritarianism around the world and the struggle against anti-Black racism in America, and it is not hard to see that the culture of death is alive and well.

But those who are most prone to support capital punishment and refuse Covid-19 safety protocols, who explain away and excuse violent insurrection, reject refugees and migrants, and deny the reality of climate change and racial injustice, are precisely the ones who have decried the “culture of death.” The tragedy and the farce of this situation is perhaps only rivaled—or sharpened—by the graphic and horrific images of Blue Lives Matter flags flying in the same place where a Trump-supporting police officer was bludgeoned to death with a fire extinguisher. A culture of death, indeed. Lord have mercy….

It’s worth reading, if you have access (and they allow a certain number of freebies to nonsubscribers).

Oh, by the way, I post these items in the hope that some of my fellow Catholics will see them and engage. The rest of you are certainly welcome to join in — even those of you who use all such posts as another opportunity to express your distaste for us nasty papists. Whatever, knock yourselves out.

But my fellow papists out there — this is mainly for you, so I hope to hear from you…

Sorry. I couldn’t resist referring to the old joke in the headline. A more straightforward way to say it would be, “don’t understand that the Pope outranks them.”

At moments such as this, it seems they tend to think of him as “just the bishop of Rome,” rather than the Holy Father.

Or maybe they do get it, since it seems they pulled back their harsh statement when the Vatican stepped in.

Anyway, the conflict persists. Following up on my earlier posts on this subject, here are some excerpts from a piece in the Jesuit magazine America, rapidly becoming one of my favorite sources:

In a message of “cordial good wishes” to President Joseph R. Biden Jr. after his installation as the 46th president of the United States, Pope Francis assured him of his prayers “that Almighty God will grant you wisdom and strength in the exercise of your high office.” 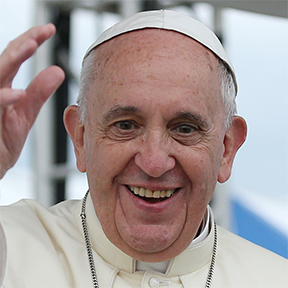 He told the president that he prayed that “under your leadership, may the American people continue to draw strength from the lofty political, ethical and religious values that have inspired the nation since its founding.”

“At a time when the grave crises facing our human family call for farsighted and united responses,” the pope wrote, “I pray that your decisions will be guided by a concern for building a society marked by authentic justice and freedom, together with unfailing respect for the rights and dignity of every person, especially the poor, the vulnerable and those who have no voice.”

Furthermore, the pope said, “I ask God, the source of all wisdom and truth, to guide your efforts to foster understanding, reconciliation and peace within the United States and among the nations of the world in order to advance the universal common good.”…

Pope Francis’ warm message contrasted with the public statement that had been prepared by Archbishop José Gomez in the name of the U.S. Conference of Catholic Bishops. While the bishops’ statement included much the pope would agree with, it nevertheless adopted a confrontational tone over the issue of abortion especially, as well as contraception, marriage and gender. The Vatican only learned of the U.S.C.C.B. message hours before it was due to be released, and a senior Vatican official told America that “it was reasonable to say” that it had intervened but did not confirm or deny the details first reported by The Pillar.

There was a negative reaction from Vatican officials contacted by America in Rome to the statement issued by Archbishop Gomez in the name of the U.S.C.C.B. “It is most unfortunate and is likely to create even greater divisions within the church in the United States,” a senior official, who did not wish to be named because of the position he holds at the Vatican, told America….

Anyway, as I said earlier, I feel blessed that Francis is my pope, and Joe is my president….