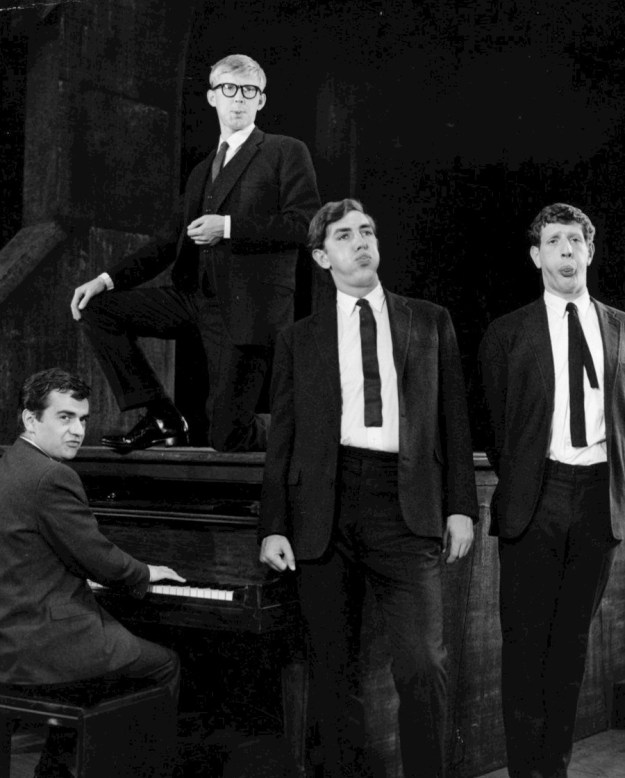 Phillip Bush — who we all know does possess such talent — brought this to my attention today. I had no idea Dudley Moore was so gifted. I know him mainly for his silly comedy work of the 1970s:

In case you missed this obvious bit of mastery, Phillip helps you appreciate it better:

Those double octaves at 3:00 pretty darn impressive. Dude could play.

Yes, just what I was thinking, about three minutes into it. 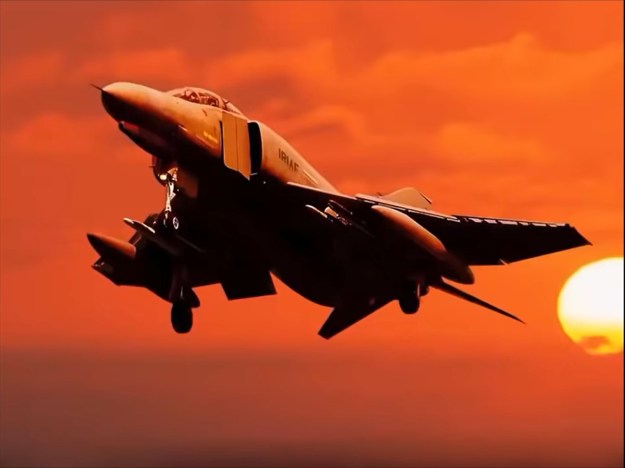 I’m trying to keep my mind off of Super Tuesday today. The last three days have been wonderful, from Joe’s stunning win here, through the endorsements of Amy, Pete and Beto. But while Joe was concentrating on South Carolina, Bernie was getting a huge head start everywhere else, especially California. And Bloomberg was spending half a billion dollars to try to win the very voters Joe needs to stop Bernie. 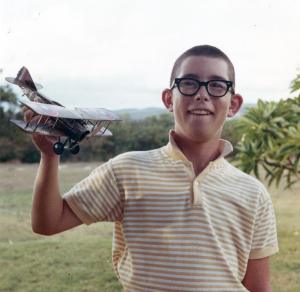 Burl with one of his early models.

So… how about a Top Five List? I’m feeling kind of basic today (I’m in a “Top Five Side One, Track Ones” mood), so let’s make this the sort of list we could have made when we were 11 years old and building model airplanes. Back when we weren’t cool (yet), but we had a keen sense of what we thought was cool. We can make it a sort of tribute list to our friend Burl Burlingame, who along with many other accomplishments was the best modeler any one of us ever knew.

And just to head off the “war-monger” cries from some of my friends, I’m sorry, but warplanes have always been cooler than civilian aircraft. Not because they’re warplanes, but, well, just look at them. Built for speed and performance, they’ll always be cooler than, say, a 707. The way a 1964½ Ford Mustang or a 1962 Jaguar XK-E is way cooler than a minivan.

This was inspired by a video YouTube suggested to me this morning. I had called up Cream’s “Tales of Brave Ulysses,” and YouTube suggested something called “Best Rock Songs Vietnam War Music.” And again, it’s not “War” that makes it cool. Think about the Vietnam War movies you’ve seen. Don’t they tend to have awesome soundtracks?

So, intending to just leave it playing while I worked, I called it up. And the first image on the screen was the above one, of an F-4 Phantom taking off. (No, wait — the flaps are down, so I think it’s landing. But I don’t know. Bob Amundson, can you give us a ruling?) It showed while CCR’s “Fortunate Son” was playing.

So I got to thinking, and here’s the list. And not in order of coolness — more chronological:

I almost put the Navy’s ultimate WWII plane, the F4U Corsair, on the list (foldable gull wings! Pappy Boyington!). But the P-51 beat that out as well as the Spitfire.

The North American X-15 rocket plane, made to fly to the edge of space. 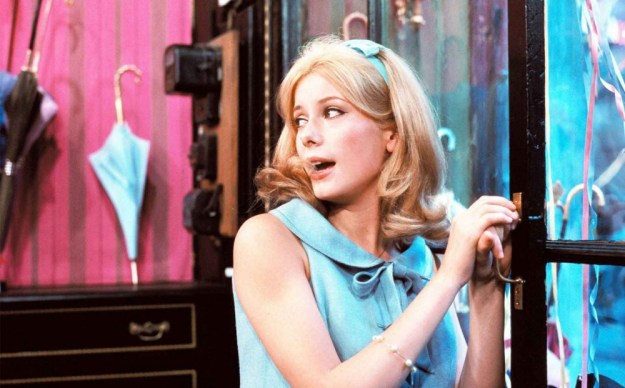 Having recently become members of the Nickelodeon, my wife and I on Sunday attended a special showing of “The Umbrellas of Cherbourg, ” the film that launched Catherine Deneuve as a star.

I’m not what you’d call a big fan of colorful romantic musicals of the early 1960s, but this one was unusual, if not unique. And not just because it was in French.

First, it was at first glance visually very much like Hollywood films of the time — very Kandy-Kolored, none of that somber continental auteur black-and-white stuff. In fact, the colors were sort of a foreshadowing of the later psychedelic portion of the decade. The wallpaper alone in some of the interior sets would make you suspect there were some very funny mushrooms in the vicinity of Cherbourg.

Then there was the fact that it wasn’t just a musical musical, in the sense of people suddenly and without warning breaking into song for no good reason. Every word of dialogue, down to the most pedestrian remarks, was sung. A bit disturbing at first, but this operatic device worked, even with me. In the opening scene, a guy who works with one of the protagonists at a garage sings that he doesn’t like opera; give him movies instead. I could identify, ordinarily. Anyway, it made for a nice little internal joke.

If you get the opportunity to see the film sometime — it’s no longer showing at the Nick — it’s worth it just for the moments when suddenly, you recognize a tune the characters are singing. I was delighted and frustrated by this, because these tunes were very much a part of the background of the 1960s — the grownup, Muzak, “standards” part that was always playing somewhere, even though it’s not what we kids sought out. Here’s a cover of one. I’m proud that I made the connection on this one before the film was over, when suddenly my brain replaced the French words with “If it takes forever, I will wait for you.” Here’s another earworm from the film.

I had never heard of the film back in those days, but I certainly knew the tunes.

That warning seems a bit unnecessary, but I’m hoping that some of you who haven’t seen it will see it sometime. As for those who have seen it, I’d be interested in what you think about how the film turned out.

As happens at the Nick, there was discussion of the film there in the theater before and after the showing. At the start, we were told that this apparently light story was set within the context of France’s traumatic experience in the Algerian War. But… I didn’t see any heavy political subtext. The structure of the film was in three parts, the first being boy-meets-girl and the second boy-leaves-girl-to-go-to-war. It could have been any conflict, or some other cause. The point was that the boy went away. There was nothing special about the fact that it was to Algiers. 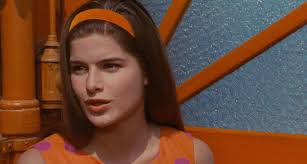 Madeleine — not only was there character in her face, but she had a sort of Katharine Ross thing going on…

Then there was the ending, which in a sense was the least Hollywood thing about the film. And this is the real spoiler. We’d been set up to think it would be a terrible thing if Geneviève and Guy didn’t get back together — in conventional Hollywood terms. But from the moment Mssr. Cassard and Madeleine made their appearances, I felt that they were better mates for our star-crossed lovers. Sure, in Hollywood-values terms, Deneuve was beautiful as Geneviève — being beautiful was her specialty, especially when she was older — but Madeleine was more my type, and Guy’s, too, I thought. Not only did Ellen Farner have a kind of pre-Katharine Ross thing going on (and it was a law of movies in the ’60s — if Katharine Ross appears, you the male viewer will fall in love with her), but there was depth of character in her face. This is the girl you marry, Guy. And Messr. Cassard was more the kind of mate Geneviève needed, despite — or perhaps even because of — his over-trimmed mustache.

Anyway, I guess that’s enough on the subject of a film you probably won’t see unless you go out of your way. But it impressed me and I wanted to share that… 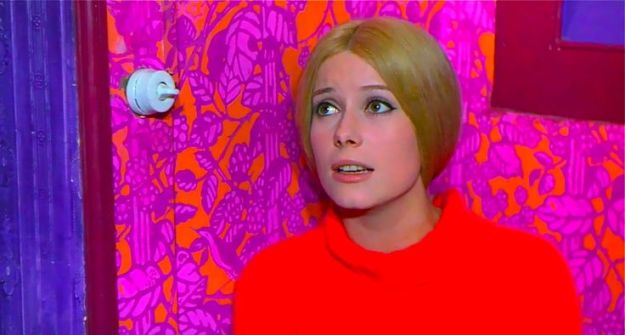 The psychedelic wallpaper was well ahead of its time.

We’ve had a reference to some old-boomer music, and we occasionally have a reference to Phillip’s musical talent. Accordingly, I thought I’d give y’all a chance to talk about the music that you’re listening to (or playing) now.

Currently, I’m preparing for a contested motion hearing, so I’ve got Holst’s “The Planets” on in the background here at the office as I go over my final points.

What is everyone else listening to these days?

Enough of the political back and forth for one day, eh? How’s about we get a drink, put our feet up, and listen to Aretha Franklin and Duane Allman jam out.

Consider this your politics-free open thread.

Of all the things I like to write about in spite of knowing nothing about them, music is one of my favorites.

Lately, I’ve been boring members of my family by making them listen to the opening of Leon Russell’s “I Put a Spell on You” from his eponymous album (the one before the Shelter People one). No, not a Screamin’ Jay Hawkins cover. Totally different song.

It has one of those “you are in the studio” false starts at the beginning. Actually, two or three of them. I’ve always thought those things were a little obnoxious, because they seem to play on fans thinking it’s cool to hear their rock ‘n’ roll heroes being informal, making mistakes, and it seems self-conscious, as in “We know y’all will enjoying feeling like you’re rubbing shoulders with wonderful us in the studio, so we’ll throw you a bone.”

Or maybe I read too much into it.

Anyway, I like this one because of what Leon does with it. There’s one false start. Then another. Then he, and a guitarist, play a sort of winding, downward pattern. And then suddenly, Leon does that thing where you run your finger down the keys in one long flow, from right to left (what’s that called?), and then the rollicking song actually begins.

It feels, to me, like the musical version of jump-starting a car with manual transmission by letting it roll down the hill and letting out the clutch with the gearshift in first. If you’ve ever done that (I’ve had to do it a couple of times with my Ford Ranger), see if listening to this kind of feels that way to you.

Here’s the other musical thing I wanted to bring up. This is probably a question for Phillip Bush, like when I asked why awesome songs such as Leonard Cohen’s “Hallelujah” are so awesome. What musical tricks make the endorphins flow?

I’m thinking that about the theme song to “Orange is the New Black,” which we’ve touched on here previously.

The magic seems to occur in two places. One is when Regina Spektor gets to the line, “And you’ve… got… ti-i-IME!” What is she doing there? It’s unusual, and very appealing. The other cool part is the bridge (I think), where she shifts gears and goes:

Anyway, it’s very appealing, whatever she’s doing. I wish I could put it into words. But if I could, I guess we wouldn’t need music, which would be a shame…