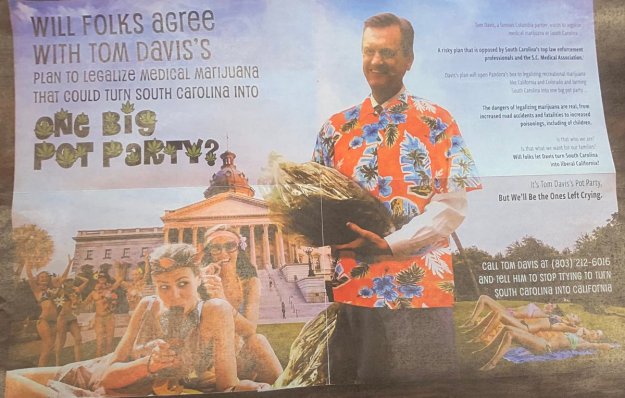 This was tweeted yesterday by my own favorite legislative libertarian, the inimitable Sen. Tom Davis:

My #MedicalMarijuana bill — proposing the most tightly regulated MMJ law in the country— has traction and is moving through the legislative process, so opponents are now sending anonymous mailers like this. Pathetic. pic.twitter.com/vCbheWVOLi

Needless to say, it’s getting a lot of response.

First, I thought it was a hoot. Next, I had other thoughts:

Here’s an explanation of my “Dark Money” bill H3045. With your help, we can get this passed this year! Thank you friends!!! #scpol #DarkMoney pic.twitter.com/ccuSoCVZYm

And finally… here’s another such mailer (or, I suppose, the other side of this one): 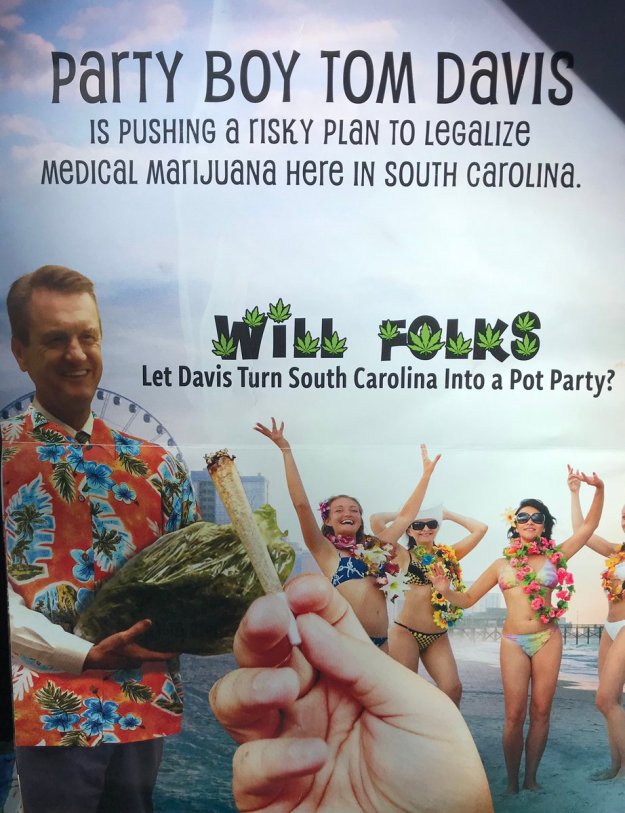 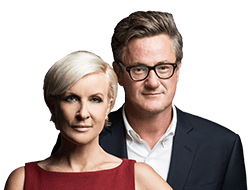 The most powerful man in the world feels so picked on by these people that he lashes out like a middle-schooler writing in a slam book.

A guy is up at 3 a.m. spewing out Tweets that are nearly or completely incoherent (covfefe!), filled with offensive vitriol, lashing out at everyone who has ever — in his surly, dim perception — done him wrong. Especially if they’re women. The next day, everyone who knows him is in an uproar. The whole world, including some of his friends, says this must stop! The next night, he does it again.

This is a classic pattern, right? So how is it possible that there’s not alcohol, or some other intoxicant, involved?

And yet, we are so often reassured, the man who Tweeted that gross effusion about Mika Brzezinski — just the latest in a sickening, unending series (it still blows my mind that a president of the United States finds time to tweet more than I do) — does not touch strong drink. There’s a compelling, tragic backstory to this — Trumps older brother, an alcoholic, died at 42.

And I continue to believe it.

But how, then, do we explain the Tweets? Or the rest of his behavior, for that matter? But the Tweets seem the perfect distillation of all this other unhinged behavior, set down in writing and shared with all…

What grown man who is sober would write about a woman, “She was bleeding badly from a face-lift. I said no!” (Especially when there’s no truth in it.) A sober 12-year-old might. But not a sober grownup, under any circumstances.

Oh, and by the way — I cited above the pattern of middle-of-the-night Tweets. This wasn’t even that. The two Tweets leading to the latest uproar went out at 8:52 a.m. and six minutes later. You know, at a time you’d expect a POTUS to be getting his morning intelligence briefing, or making calls to Congress to try to pass his agenda, or meeting with foreign dignitaries, or something other than watching a TV show and obsessing about how much he hates the hosts, and publishing rude, crude comments about them — the sort of childish, mindless insults that kids wrote in “slam books” when I was in middle school.

If Trump were a guy who started drinking at breakfast, like Winston Churchill, this would make some kind of sense.

But once you take alcohol out of the mix, how do you explain it?

I followed a link provided by Bryan to a site that Wikipedia describes as “conservative,” but — just going by the headlines — seems quite a bit farther to the right than that.

Anyway, in the middle of the piece Bryan had linked to, I saw the above ad. Here’s what it linked to.

And I thought, “Really? Still?”

I had thought all that demonize-the-Clintons stuff was about keeping her from becoming president. Apparently, for some folks, it’s a career.

Which, of course, is what’s wrong with American politics across the spectrum from left to right: All those folks out there, in the parties and the many more-or-less affiliated interest groups, whose jobs depend on keeping people outraged… 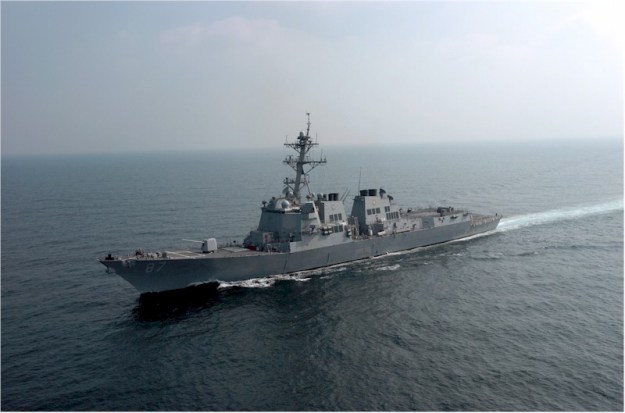 USS Mason, which was fired upon by Houthi rebels.

While the rest of us are busy listening to a tacky, self-absorbed huckster conjugating the verb “to f___,” there are real things going on out in the real world.

Leave it to our own Lindsey Graham to notice: 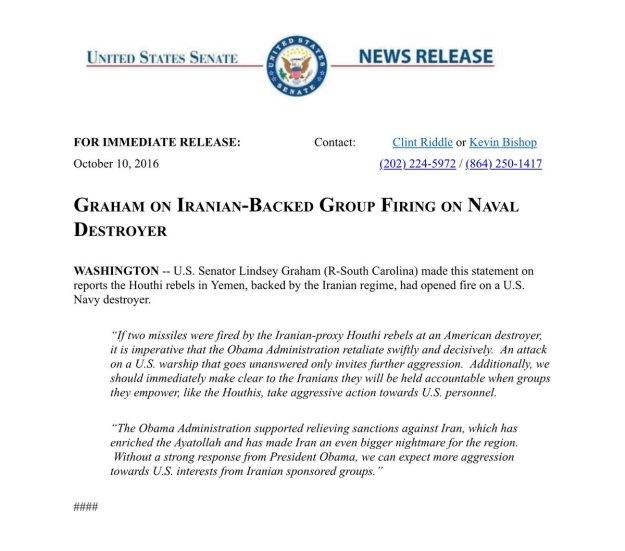 Here’s a news story on the subject. 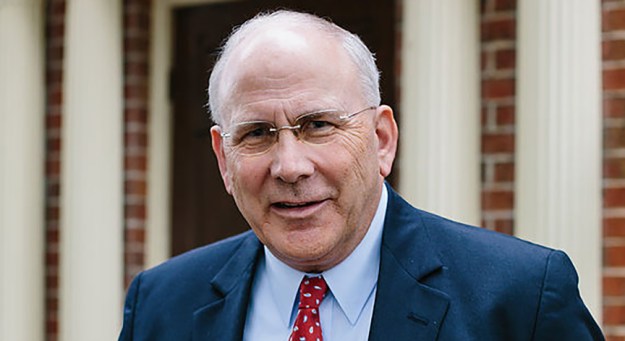 First, she went after Hugh Leatherman and Luke Rankin, and I did nothing. Or nothing beyond a mention in an open thread.

Gov. Nikki Haley is backing another opponent of a longtime S.C. senator. 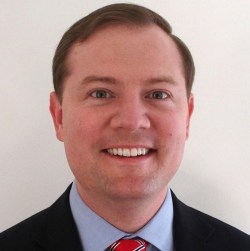 Haley will campaign with Climer, a former York County GOP chairman, at a barbecue at his home next Thursday at 6 p.m.

The endorsement pits Haley against Hayes, who has been in the state Senate since 1991 and served in the S.C. House since 1985 beforehand.

“Wes Climer is a conservative businessman who is leading the fight for term limits, lower taxes and good government reform,” Haley said in the release. “If we are going to change the way the Senate works, we are going to have to change senators.”…

In other words, she’s saying Climer is an unknown about who we know one thing: He would be a reliable vote for trashing government. Another Tea Partier. Another of those who have eviscerated the Republican Party from within.

Because if what she cares about is “good government reform,” she’d be going all-out to re-elect Wes Hayes.

On one level, this is reminiscent of the governor’s capricious replacement of Darla Moore on the USC board of trustees with an unknown guy who had contributed to her campaign. I mean it’s like that in the sense that she wants to replace someone who has a stellar record of solid support and service to the people of South Carolina with a political nonentity who can be relied upon to do the governor’s bidding.

Wes Hayes is one of the best members of the S.C. Senate, particularly on the issue of ethics. Even the Democrats call him “the Dean of Ethics” (and by the way, that link shows you just how far Sen. Hayes has gone to avoid offending the governor — something he has reason to rethink right about now).

No one who is serious about ethics would lift a finger to help an opponent of Wes Hayes.

This is outrageous. This is the most Mark Sanford thing Nikki Haley has done in quite some while…

I suppose I must say something about this, since he said it here in South Carolina — yet another blot on our ledger.

Not that we control what Donald Trump says. No, the really, truly shameful thing about it for us is that some people present — most of them likely to have been South Carolinians — cheered when he said it:

At a rally in Mount Pleasant, South Carolina on Monday evening, Trump pointed to the statement he released earlier in the day.

“Should I read you the statement?” he asked.

The crowd enthusiastically agreed that he should.

“Donald J. Trump is calling for a total and complete shutdown of Muslims entering the United States until our country’s representatives can figure out what the hell is going on,” he said, adding the word “hell” for emphasis this time.

In another version of that story, that applause is described as “a boisterous standing ovation.” Is that accurate? View and listen to the video clip above, and judge for yourself.

The response is important because it is our shame, but also because Trump, employing his usual odd logic, used it to defend himself this morning: Hey, these people loved it, so it must not have been a bad idea….

In a way, for the rest of us to have to condemn this is an insult itself. We shouldn’t have to say anything, because anyone who thinks we wouldn’t be sickened by hearing something so stupid and hateful is insulting us by such a supposition.

But since South Carolinians applauded, we need to separate ourselves from them. How about if we do it this way: Let’s deport everyone who applauded and cheered, and then refuse to let them back in. It might not make us safer, but it would certainly make this political season less objectionable. (And no, I don’t mean it.)

So yeah: It was horrible. Probably the most horrible thing he’s said yet, although he’s got quite a competition going with himself. He’s an idiot, and he’s evil. But that’s not the problem. The problem is that vast numbers of likely voters love him for his worst qualities, which points to a profound sickness in our body politic.

He’s been denounced — by Muslims of course, by Lindsey Graham, by Paul Ryan, by Dick Cheney (no soft-on-terror guy he),  by leaders all around the world. And pundits, of course. I like what Alexandra Petri said: “What will make America great again is getting rid of Donald Trump.”

Donald Trump’s comments offend the very fabric upon which our country was founded. His racist and offensive campaign for President of the United States should embarrass the Republican Party. His comments are an embarrassment to South Carolinians, who believe in equality, fairness, and justice for all.

… which would have a lot more impact if Jaime didn’t denounce pretty much everything any Republican candidate has to say.

What else is left to say? I’ll leave it to you… 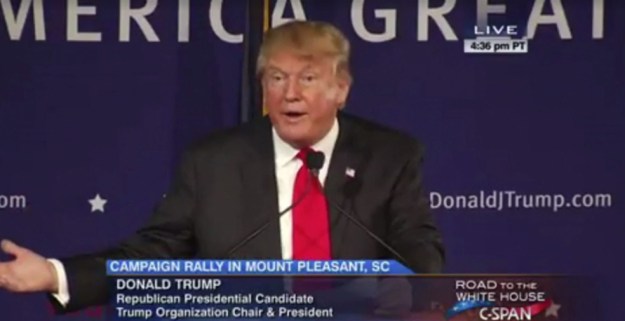 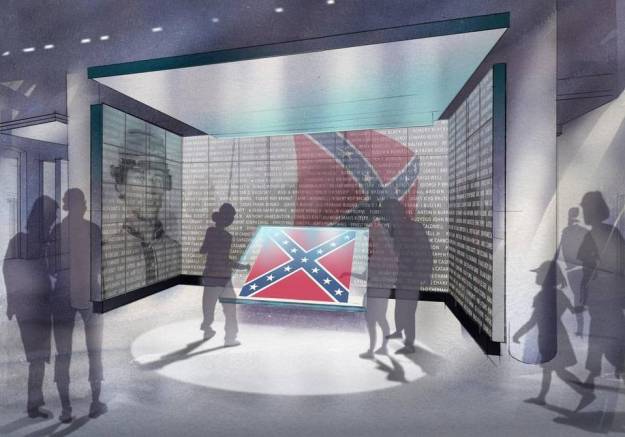 Artist’s conception of the shrine to a nylon fake. Another reason to oppose the proposal: Apparently, people who view it turn into shadows of themselves…

Sorry not to have gotten to this one sooner.

It’s been proposed — not by any elected official, thank God, but by a private consultant — that $5.3 million be spent to display the fake Confederate flag that flew on the north lawn of the State House until the wonderful moment back in the summer when we removed it.

Let’s examine a few of the ways in which this is an appalling, outrageous idea:

I could go on, but I’ll end my litany there, and let y’all add any other outrages that occur to you. 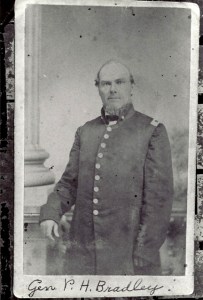 I’ll close with a personal anecdote and a proposal. It relates to one of my great-great-grandfathers, Patrick Henry Bradley, for which the tiny community of Bradley, S.C., is named.

In family lore he is known as “General Bradley,” because he was elected to that rank (brigadier, I think) in the South Carolina Militia. But in the Civil War, he served as a captain. And he obtained that rank by raising his own company from the countryside around his home.

He left behind his unit’s battle flag, which eventually came into the possession of my grandmother, his granddaughter. Long ago, she donated the flag to the Relic Room. Much later, in the 1980s, she went to the Relic Room hoping to view it. It wasn’t on display, which is not surprising — the museum has lots of relics that are in storage. That wasn’t the bad part, although it did disappoint my grandmother.

The bad part was that they couldn’t find the flag.

Museum director Allen Roberson — a good guy I happen to know from Rotary, whom I do not blame for this travesty unless I see evidence to the contrary — said that part of this ridiculous addition would be devoted to some authentic “garrison flags that have never been seen.” Who knows? Maybe my ancestor’s is among them.

Here’s my proposal: Take one of those flags and put it into a nice, plain wooden display case with a glass front, and find a corner of the existing museum space to place it in. Budget no more than $100 for this project, and I’ll raise the money from private sources.

Then you can take that embarrassing nylon thing, which is already conveniently folded up in a tight triangle, and put it where my ancestor’s real flag was.

Any heritage advocate who has a problem with that is lying about what motivates him.

But wait — the reports I’m seeing say that the bill that removed the flag required that it be “displayed.” OK, fine — put that in the $100 box, if there’s no way around the provision.

And then, let’s move on.