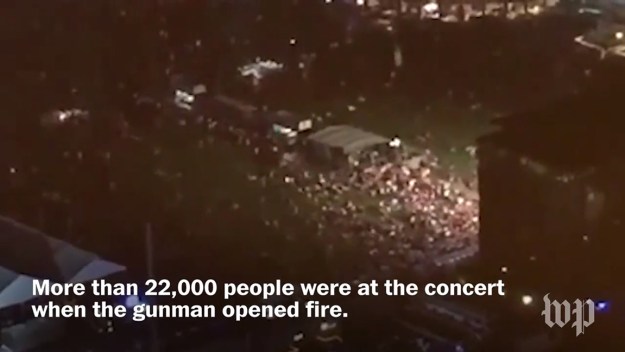 After ex-Marine Charles Whitman killed his wife and mother, then went to the top of that tower at the University of Texas and shot 15 people dead and wounded 31 others in 1966, he was shot and killed by police. And the autopsy found he had a brain tumor.

So far we have no such pat answers for why Stephen Paddock killed at least 58 people and wounded hundreds, firing from his Las Vegas hotel room. So far, he has no criminal record or known association with a terrorist group. His family is baffled.

The only “explanation” we have so far is that he is one more guy with a penchant for killing and a bunch of guns he shouldn’t have had.

The political reaction has already started, with Republicans gathering for a moment of silence and Democrats saying no, they won’t be silent this time. I suppose over the next couple of days we’ll see the usual pattern of people flocking to stores to buy more guns. Or maybe not, since no one expects this president or this Congress to do anything to restrict the flow of guns or ammunition. And doing so for personal protection in this context makes less sense than usual: what good would another handgun be against a guy firing automatic weapons from cover 32 stories up?

I have no explanations or comforting thoughts to offer at the moment; I just though y’all might be interested in discussing it…

Yesterday, I Tweeted out the headline of an editorial in The Washington Post: “As Aleppo is destroyed, Mr. Obama stands by.”

Today, the above video went viral around the world. It shows a tiny boy, covered in dust and blood after being pulled from rubble, sitting in an ambulance seat that’s far too big. He’s quiet. He seems stunned. He wipes his face, sees the blood, tries to wipe it off his hand onto the seat, then goes back to staring ahead.

This, my friends, is what “as Aleppo is destroyed” looks like. The boy is Omran Daqneesh. He’s 5 years old.

And here’s a Tweet that puts things into perspective:

Syrians are tweeting Omran’s picture as they ask why the world is doing nothing about the killing in #Aleppo pic.twitter.com/ioXM3Tgmke

When I Tweeted that editorial headline yesterday, someone responded on Facebook, “What would you suggest he do, Brad?”

Now? I suppose it’s more a question of what he should have done the last few years (such as some of the things Hillary Clinton urged him to do when she was Secretary of State). I don’t know enough about the details of the current situation even to know what is still possible.

But I guess my short answer is, SOMETHING. Not that any answers are easy…

All I know is that I look at that child, and see my grandson…

It’s early in the discernment process, and we lack any context (whatever the context may be), but the extremely brief video is a kick in the gut, especially the instant when the desk flips backward in a way that almost seems to defy physical laws. It’s amazing that the student wasn’t injured, a fact we can only chalk up to the resilience of youth.

Here, from The State, are the skimpy facts, which tell us next to nothing:

The Richland County Sheriff’s Department is investigating an incident between a school resource officer and a female student at Spring Valley High School on Monday, after a video showing a confrontation was posted online.

The female student and a male student were arrested for disturbing the peace, said Richland County Sheriff’s Department spokesman Lt. Curtis Wilson. The resource officer, Senior Deputy Ben Fields, has been placed on administrative duties with pay pending the investigation’s results, according to Wilson.

While Fields will work at the Sheriff’s Department, he won’t be performing any duties at area schools. In a statement, the Richland 2 school district said it had “directed the school resource officer not return to any school in the district.”

The video shows Fields approach the female student seated in a desk. The resource officer proceeds to place his left hand on the female student’s left arm, before putting his right arm around her neck. Fields then flips the desk over, with the student still seated, before spinning it around and forcibly removing the student and trying to restrain her at the front of the classroom.

Wilson said no one was injured in the incident – neither the students nor Fields.

Wilson said prior to what is shown in the video, the female student was asked to leave the classroom and refused. Wilson said that was when the resource officer was called in….

The official response to the incident seems appropriately cautious so far. The sheriff is out of town. The mayor wants an independent investigation. The school district’s one response, saying it doesn’t want that officer back in the classroom, seems appropriate under the circumstances.

All we have now is a video that shocks the viewer as much as it seems to have shocked the bystanders, who react not at all — their stillness is almost eerie — except for the one who shot these 15 seconds.